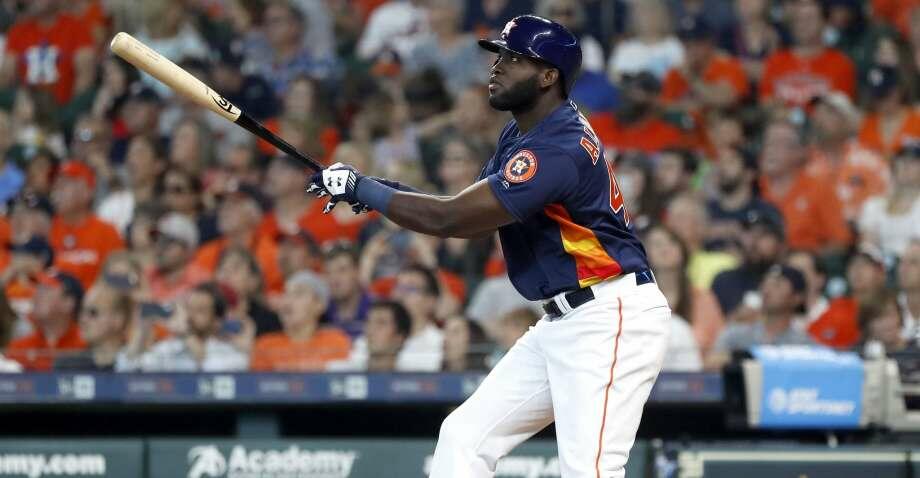 Alvarez made his Major League Debut Sunday, going 1-3 with a walk and a 2-run homer. This was quite the debut for arguably the best power hitter in the minors to this point in 2019 (23 HR, 71 RBI, .742 SLG%) and with the rash of injuries to some of Houston's top hitters he figures to see consistent action. 2019 at AAA is a bit of a coming out party for him as he had totaled 32 home runs over his previous 4 minor league seasons, despite always profiling as having high raw-power. 2019 has seen him improve his walk rate a bit in the minors (up to 15%) while getting that K rate below 20%. His flyball rate is down about 7% - and his better approach at the plate is paying huge dividends as his batting average is almost up 100 points to .343. Grab him now while he is still available.

Odorizzi dazzled again Sunday allowing just 1 run on 5 hits over 6 innings, while striking out 8. Odorizzi now is the owner of a 9-2 record with a crisp 1.92 ERA, .97 whip and a career high 9.79 K/9. This is more impressive considering that he is an extreme flyball pitcher, so much so that he is second in flyball rate (50.7%). As expected this would need lead some of his advanced metrics (.426 xfip) to be a bit more on the unkind side, but he has been sensational with a career low .56 HR/9 and has held runners at check when they do reach for an 83% strand rate. He has shut out the opposition in 6 of his past 8 starts, which has led to the continual shrinking of his ERA. His average fastball velocity is sitting at 93mph, 2mph higher than last season and seems to be a key factor in his swinging strike rate (12.7%) which would represent a new career high. He lines up for his next start Saturday vs the Royals.

Cruz went 3-6 with his 11th home run of the season; he also scored and drove in 2 runs apiece. Cruz missed almost 3 full weeks at the end of May and early June but has mashed since his return - going 7 for 21 and has now homered in 4 consecutive games. The Twins offense was humming right along without him and it should be fun watch one of the premier home run hitters return to an elite looking lineup. The injury potentially put in jeopardy his streak of 5 straight 37+ home runs season but he will need to improve his plate discipline a bit as well. He is currently striking out at a 29.2% clip, which is even high for him as he is making contact at a career worst 65% rate - despite raising his hard-hit rate to over 53%. These numbers all very nitpicky as he has a robust .924 OPS - and the only thing holding him back from being a fantasy starter on a regular basis is, in most cases his ability to only play DH.

Montas improved to 8-2 throwing 6 innings of 2-run ball, striking out 10. Montas pumped the strike zone throwing 70 of 92 pitches for strikes, while inducing 17 swinging strikes. Despite only generating 6 groundballs in Sundays game Montas has been among the league leaders with a 51.5% groundball rate and his 8.87 K/9 is solid, but not quite the 10 K/9 number that he posted along various stops in the minor leagues. He primarily throws a fastball that averages 96 mph and his changeup, however he has added a splitter his arsenal in 2019 and has seen great results - limiting opposing hitters to a .176 average against and racking up 23 punchouts. In addition to his 8 wins, Montas holds a 2.84 ERA and a 1.18 whip - a nice number considering he has struggled with command at times. He will go for win 9 his next time out vs the Mariners on Saturday.

Encarnacion his 19th and 20th home runs of the season Sunday. June has been very kind to him thus far as he has already hit 7 home runs and driven in 12 runs while posting a great 6:8 BB:K ratio. He is well on his way to his 8th straight 30+ home run season and his .245/.356/.532 line is right in check with his career numbers despite him playing into his age-36 season. He has cut down his strikeout rate to 19.4% as he had a slight increase last year which depressed his batting average. A .231 babip looks to be the culprit this year as to why his average is lagging a bit behind his .263 mark - but I would expect him to improve upon that as the hits start to fall. The 2-home run day moves him into first place for the AL home run lead, and his 46 RBIs are currently a top-5 mark in the AL as well.