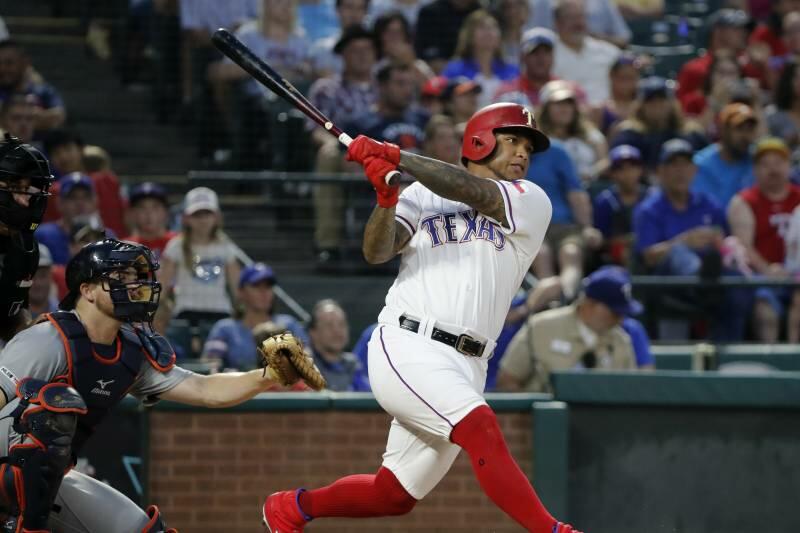 Willie Calhoun (OF-TEX) enjoyed a tremendous day at the dish against the Orioles on Friday, as he went 2-4 with a pair of big flies and 4 RBI. The 24 year-old has been finally given a chance to play everyday for the Rangers and he's delivering. In just 249 big-league plate appearances on the year, he's batting .269 with 18 dingers and 40 RBI. While he doesn't walk a ton (just 5.5%), he also doesn't strike out much (16.1%) and makes a fair amount of hard contact (40%). Although he was cold for the start of September (just 2-17) entering Friday's game, it's worth noting that he bashed 9 longballs in August while maintaining a .250 average in his 111 plate appearances on the month. He's available in just over 70% of ESPN leagues.

Lucas Giolito (SP-CHW) continued to build upon his breakout 2019 campaign by tossing 7 innings of 2-run ball against the Angels in which he allowed just 3 hits and walked 1 while fanning 6. Overall, his ERA sits at 3.27 on the season, with a 3.41 FIP backing it up - a stellar 11.4 K/9 and solid 3 BB/9 are keys to his success. Although his ERA is up a bit since the All-Star break (3.53, was 3.15 before), with a similar jump in his FIP to 3.69, he's been in some ways better during the second half of the season. For example, his K/9 in 63.2 second-half innings sat at 12.7 entering Friday's outing (10.8 in the first half) while he trimmed his walk rate down to 2.4 during that span (was 3.4 before the break). Opposing batters, however, have managed to make 5% more hard contact on batted balls since the midsummer classic while also hitting 5% more flyballs. Accordingly, his HR/9 is up to 1.70 during the second half after sitting at just 0.81 during the first half of the season. At any rate, Giolito is vastly improved and his strong outing against the Angels shows that he still has something left in the tank for the stretch run.

Charlie Morton (SP-TB) will make his next start on Saturday against Toronto. This is a fairly favorable matchup for the righty, as the Jays rank in the bottom 10 in the league offensively in both runs scored and strikeouts. Especially so since the 35 year-old Morton is in the midst of a career year with a 3.06 ERA (2.79 FIP), 11 K/9, and 2.6 BB/9. And while it might appear that he has regressed a bit since the All-Star break, as his ERA sits at 4.53 in 57.2 innings of work, his FIP of 2.68 actually clocks in a bit lower than his 2.85 from the first half of the season. A .342 BABIP in the second half (.276 before the break) and 64% strand rate since the midsummer classic (81% before) are to blame here. The underlying metrics indicate that what Morton did during the first half of the season is pretty legit, so I would start him with confidence against Toronto.

Mike Montgomery (SP-KC) is slated to start against the Marlins on Sunday. His 4.42 ERA and 5.06 FIP on the season might not inspire a ton of confidence in fantasy owners, but he logged a 2.45 ERA (albeit with a 4.54 FIP) in 29.1 innings of work in August, recording a season-best 9.5 K/9 and a solid enough 2.8 BB/9. Although opposing hitters still made plenty of hard contact against him (44%) in that month, he induced groundballs at a 54% clip to minimize the damage. Based on his strong August, I recommended him as a streamer about a week ago, just before he faced the lowly Tigers, and he rewarded those who started him with 5.2 innings in which he allowed just 1 run on 6 hits and a walk while whiffing 5. Montgomery is on tap to take on a Miami lineup that has scored the second-fewest runs in the majors and has struck out the 10th most, so I would give him a look. He's currently waiting for your add in over 92% of ESPN leagues.

Luis Robert (OF-CHW) is a name to keep in mind as you prepare for the 2020 fantasy season. The 22 year-old has put together an excellent 2019 campaign across the 3 highest levels of minor-league ball, exhibiting an ability to contribute in every offensive category. In 223 Triple-A plate appearances, he's batted .297 with 16 homers and 7 steals. This comes after he hit .314 with 8 longballs and 21 stolen bases in 244 Double-A plate appearances. For the sake of being thorough, in just 84 High-A plate appearances he batted .453 with 8 dingers and 8 stolen bases. Yes, that's 32 homers and 36 stolen bases in 551 combined plate appearances. There are some areas of his game that aren't great, though, as has struck out at a 22-25% clip at all stops this season while walking at just a 5% rate at each level. And despite his 60-grade speed, he's pretty flyball oriented (49-56% flyball rate at each stop this year) and his average may suffer a bit in the majors. But his combination of power and speed is tantalizing, and he's just one call away from Chicago.