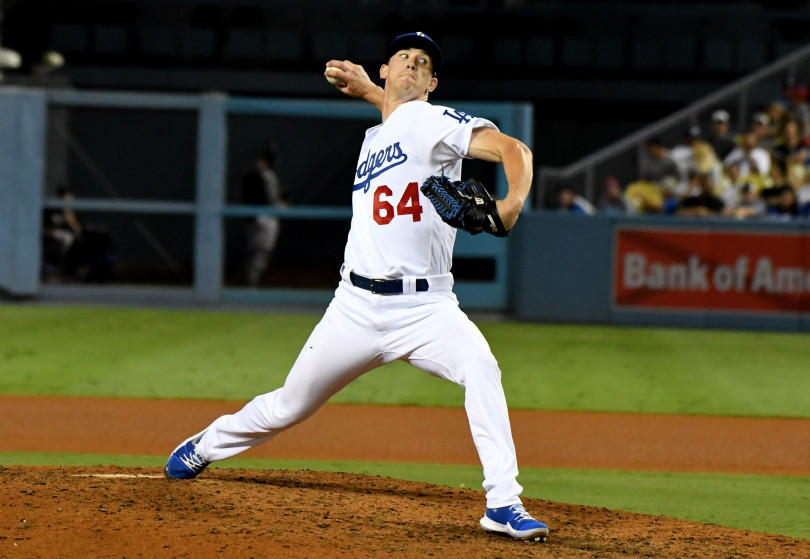 Lux made his major league debut on Monday with a 2-5, three-run performance, and the top prospect is generally expected to enjoy a strong month with the Dodgers. Although the Max Muncy injury probably didn't hurt Lux's chances of a September call-up, his .347/.421/.607 minor league slash line for the year (.392/.478/.719 at AAA) likely made him an easy call-up for Los Angeles. As a prospect, Lux boasts a strong hit tool with an advanced plate approach and above average power and speed, giving him a relatively high floor and a high ceiling, so fantasy owners should be all over the 21-year-old. Lux is currently only shortstop eligible for ESPN leagues but is slated to start at second base for the Dodgers, so likely multi-position eligibility should help his value as well. Overall, the reasonably high expectation for Lux should fall around a .280-plus batting average with a slugging percentage around .450 (probably slightly lower) and an OBP around .350 (though there's plenty of room for variability given his lack of major league experience).

Smyly picked up the win against the Reds on Monday and allowed one run over 5.1 innings with eight strikeouts. Smyly has been bad this year, but a strong pair of July starts leave some hope of fantasy value going forward. Smyly eliminated his changeup and decreased his four-seamer usage to emphasize his cutter in July, but Smyly's cutter is one of his worst pitches by most metrics. Instead, Smyly's improved performance was the result of substantially improved results from his curveball -- improvements that appear to have stuck somewhat in August so far. Smyly is still pretty far away from being a usable fantasy starter, but an improved curveball should have fantasy owners on notice going into next season. If Smyly can nail down one more pitch (and an improved fastball would be nice), then he has a shot at becoming a palatable fantasy option.

Senzel went 2-4 with two strikeouts against the Phillies on Monday. Senzel has had a somewhat bumpy rookie season with a particularly poor August, but the 24-year-old has had a fairly strong start to September with an .821 OPS in his first two games (plus his two hits from Monday). Despite a rough August overall, Senzel displayed some very encouraging trends towards the end of the month that bode well for his value through the rest of the season and into next year (if maintained). After representing 2/3rds of Senzel's contact during one fifteen game stretch in late August, ground balls have become less of a problem for Senzel over the past week, and his fifteen game rolling average sat at a more reasonable 43.8% entering Monday's game. In addition, Senzel's hard hit rate has been trending upwards recently, indicating that his batted ball results should improve substantially in the near future. Finally, Senzel's o-swing rate has declined relatively sharply over the past week (his z-swing rate has remained largely unchanged), further boosting Senzel's rest of season outlook. Expect a strong finish to the year from Senzel, and if he can maintain his recent strong trends, then an impressive sophomore season appears within reach.

Buehler struggled on Monday and allowed six runs over five innings with five strikeouts against the Rockies. After a tough first month to the season, Buehler has been lights out for the Dodgers, and the 24-year-old took a 3.03 ERA with a 6.61 SO/BB ratio into Monday's game. Buehler has been getting hit (relatively) harder of late due to his increased slider usage, but his strikeout rate has ticked up as a result of the adjustment as well (to an impressive 13.5 K/9 in August). Overall, Bueher's aversion to walks and pair of strong put-away pitches (his curveball and slider both generate whiffs at impressive rates, and his high velocity, high spin fastball doesn't hurt either) provide him with a high floor and high upside, and he should be ranked in the upper echelon of fantasy starters as a result.

Joyce went 0-2 with a walk and a strikeout against the Blue Jays on Monday. A patient plate approach, solid batted ball profile, and a little luck have powered Joyce to a .291/.397/.453 slash line, but he's been particularly productive lately with a 1.384 OPS over the last week. Increases in Joyce's line drive, hard hit, and contact rates have fueled his impressive recent stretch, and although each of those trends are no doubt positive, Joyce's recent hot streak will likely end sooner rather than later. With a .571 BABIP and 2 strikeouts over his last 21 plate appearances (a 9.5% strikeout rate), Joyce's recent numbers are both lucky and unsustainable, threatening his performance going forward. With that in mind, Joyce is still poised to produce at or above his full season numbers given his recent trends, and fantasy owners should expect him to continue playing well through the rest of the year (just not quite as well as he has over the past well).