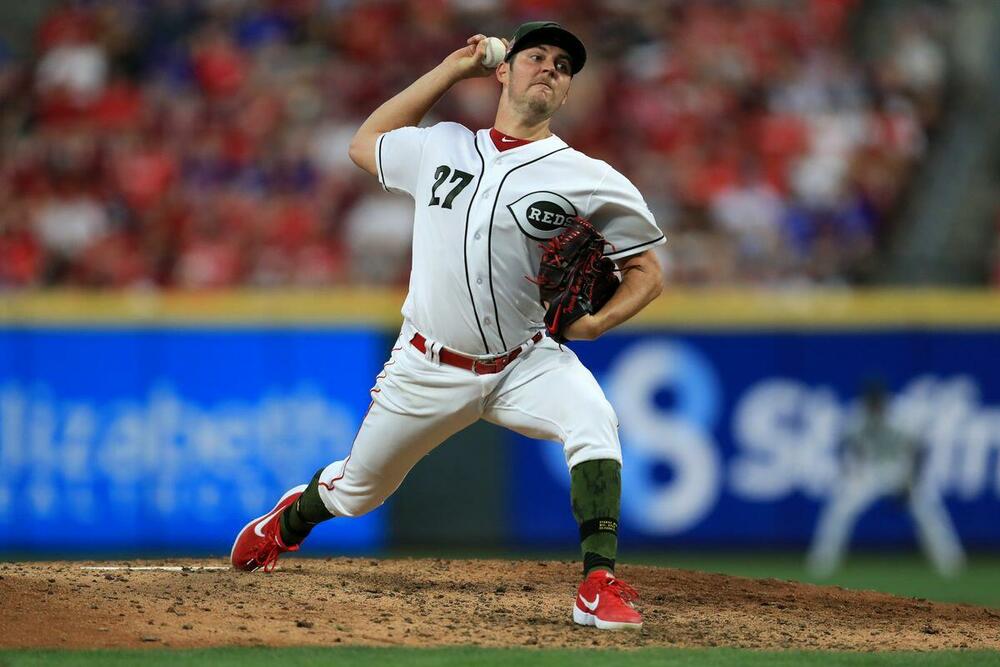 Bauer was fantastic against the Cubs on Wednesday, holding the team to only three hits (no walks) over 7.2 shutout innings with 10 strikeouts while bringing his ERA down to a minuscule 1.74 for the season. Bauer has been almost unhittable this season with a 36% strikeout rate, but fantasy players should be moderately concerned about Bauer's performance going forward. Bauer's swinging-strike rate is solid but unimpressive at 12.8% for the season, and his called-strike rate is in line with last season's 17% mark. That being said, Bauer has made one crucial adjustment that has pushed his strikeout rate up this season. Bauer's fastball has posted an impressive 26.8% putaway rate so far this season (up from 16% last year), and he's throwing the pitch in 44% of two-strike counts this season compared to 30% last year. Bauer hasn't significantly changed his fastball location in two-strike counts, but the pitch's spin rate is up by a whopping 351 RPM this season, giving the pitch an extra two inches of rise. That improvement -- combined with the fastball's usage adjustment in two-strike counts -- is likely the key to Bauer's success this season. Although Bauer's called+swinging-strike (CSW) rate is effectively flat year over year, his fastball's CSW rate is up 3.3 points to 14.1%. As a result, Bauer's inflated strikeout rate should be largely sustainable. Bauer's 85.4% strand rate is probably a little high, and his strikeout rate should still fall towards 30%, but fantasy players should expect Bauer to post an ERA below 3.00 with a strikeout rate above 30% for the rest of the season.

Davis walked and struck out over three at-bats against the Orioles on Wednesday. Davis has posted a decent but arguably disappointing .784 OPS so far this season, but fantasy managers should expect the 27-year-old to post an OPS closer to .850 over the rest of the season. An elevated 53.5% ground-ball rate has been the primary factor in Davis's control that has hurt his performance, as it's up nearly seven points from last season's 47% mark. Davis got the majority of his production on fly-balls and line-drives last season after posting a combined 1.520 OPS with those hit trajectories compared to a .593 OPS on ground-balls. That's no surprise -- especially given Davis's strong 96 mph average exit velocity on fly-balls -- and underscores the importance of Davis maintaining a low ground-ball rate. Davis has also likely suffered from some bad luck this season based on his -0.030 wOBA-xwOBA (Davis's xwOBA was 21 points higher than his wOBA last season, but he's rarely shifted against and goes to the opposite field roughly one-quarter of the time, so his wOBA-xwOBA should trend towards zero), so his performance should improve even without an improved ground-ball rate. Davis's ground-ball rate has been trending in the wrong direction lately, though, and fantasy managers shouldn't expect a significant rebound in his performance until that trend reverses.

Arcia picked up four hits against the Tigers on Wednesday, bringing his OPS up to .708 for the season. Career-lows in his o-swing (26.8%) and swinging-strike (7.9%) rates have fueled Arcia to impressive 13.5% and 9.2% strikeout and walk rates, respectively, and his contact quality has been unusually strong as well. Arcia is hitting fewer ground-balls than ever this season with a 47.8% ground-ball rate, and many of those ground-balls have turned into line drives with his line drive rate increasing nine points from last season to a career-high 31%. Arcia has also been hitting the ball hard more frequently than usual this season, with his 36.3% hard-hit rate representing another career-best. Unfortunately, Garcia's results haven't completely reflected his improvements, but that makes him a cheap, high ceiling waiver option in deeper leagues. To that end, Garcia's .286 xBA and .431 xSLG would make Garcia a top-20 fantasy shortstop, and his actual results should trend towards those expected numbers as long as his underlying production remains strong. Fantasy players in need of shortstops should be all over Garcia as a result, and he's a breakout candidate coming into next season.

Marte was out of Wednesday's lineup after being placed on the 10-day IL with wrist inflammation. Marte has fallen sharply back to earth after slashing .329/.389/.592 last season, as his OPS his fallen to .731. My first thought when looking at Marte's performance was that his plate discipline may be the biggest issue facing his performance this season, even as he's posted an 11.3% strikeout rate for the season. Marte's z-swing rate has cratered more than 11 points to 60% this season, while his o-swing rate has risen about 1.5 points to 33.4%, his o-contact rate has jumped more than seven points (80.5%), and his z-contact rate has risen only 1.4 points (92%). As a result, more of Marte's contact is coming on pitches outside of the strike zone this season. But for Marte's xwOBAcon to drop 60 points like it has this season, his o-contact/total contact ratio would have to increase from 24.9% last season to 61% this year, assuming that nothing else about his performance changed. Instead, Marte's o-contact/total contact ratio sits at a not-so-different 25.7% this season, which would have knocked last season's xwOBAcon down only two points to .410. All of that is to say that although Marte's relatively poor plate approach is mildly concerning, his power is the bigger issue. To that end, Marte's average exit velocity on pitches inside of the strike zone has dipped nearly 2 mph, likely contributing to his 55-point drop in xwOBAcon on pitches in the strike zone. Marte's power dip isn't unusual given that last season saw him post a career-best hard-hit rate and that he benefited from a .026 wOBA-xwOBA last year, so fantasy players shouldn't expect a big rebound over the rest of the season. Marte's wrist injury may explain some of that power decline, muddying his value going into next season.

Burnes was excellent on Wednesday, holding the Tigers to only one baserunner (a hit) over seven shutout innings with 11 strikeouts. Burnes is a new pitcher this season with a completely revamped arsenal, and his adjustments have paid off as he's been an ace so far this year, leaving Wednesday's start with a sparkling 1.99 ERA. At first glance, Burnes's high-spin fastball and curveball combination makes him a likely candidate to rely on those two pitches. Burnes has cut his fastball usage from 52.5% last season to just 3.1% this season, though, and his curveball and fastball combine to account for less than 15% of his total pitches so far this year. Burnes has instead relied primarily on a sinker (37.1% usage rate) and cutter (25.4% usage rate) this season, pitches which combined to account for only 4.6% of his total pitches last season. Interestingly, those two pitches are two of Burnes's worst by xwOBA this year, with his sinker posting an arsenal-worst .420 xwOBA and his cutter posting a .342 mark. Unsurprisingly, then, Burnes appears to have benefited from a substantial amount of good luck this season. Burnes's -0.063 wOBA-xwOBA would have been the third-highest mark among qualified pitchers last season, and his 34.4% strikeout rate is high based on his 13.8% swinging-strike rate. None of that is to say that Burnes won't be a valuable pitcher over the rest of the season or into next season -- an ERA below 3.50 with a strikeout rate near 30% is still reasonable -- but fantasy players should expect Burnes to cool off substantially.

Tweets by Fantistics
NL Player Analysis - September 9, 2020
When BAL's 4th and 5th OF are rosterable, things are scary....