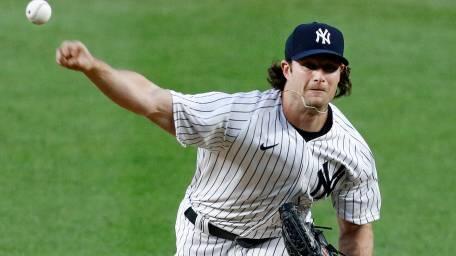 Cole was spectacular against the Rays on Wednesday, striking out 12 batters in 8 shutout innings, while allowing 4 hits and no walks. Cole has a 78:3 K:BB so far this season - I'll repeat that, he has a 78:3 K:BB this season - and now has 5 starts this season with at least 10 K's and no walks, including 4 of his last 5 starts. After a "down" year in 2020, in which Cole saw his ERA rise to 2.84 and K/9 dip to 11.59, he has bounced back and is pitching better than ever. His 1.96 xFIP is 2nd in MLB behind only Jacob deGrom and his 78 K's are only behind Shane Bieber. With deGrom currently on the IL, Cole is probably the best there is out there right now.

Abreu went 2-5 with a triple and 3 RBI against the Twins on Wednesday, and has really started to heat up in recent days. After a cold stretch that covered much of April, Abreu has now gone 10-27 (.370) with 6 XBH's, including 2 HR's, and 12 RBI over his last 7 games. Not including Wednesday, his EV was 98.1 during that stretch. Abreu's .460 xSLG is still a bit on the low end for him, but his xSLG entering Wednesday was at .502, and his HardHit% was a whopping 55.3%, so it's only a matter of time before his numbers rise.

Gurriel went 1-3 with his 7th HR of the season on Wednesday, although he was removed from the game after apparently feeling sick. Gurriel has been hot lately, hitting .353 with 4 doubles, 3 HR's, and 12 RBI over his last 9 games. Gurriel has long been thought of as a contact hitter, and rightfully so with a career 11.0 K%, but he has developed more power in recent years. His HardHit% is at a career high 45.9% and his FB% has crept over 40% the past couple of seasons. He hit 31 HR's in 2019, and it wouldn't be shocking if he ended up in that vicinity once again in 2021.

Heaney allowed 5 ER's on 9 hits, including 3 HR's, in 5.1 IP against the Astros on Wednesday, striking out 5 without a BB. This comes on the tail of a 10 K' masterpiece he tossed against the Rays his last time out, as Heaney seems to alternate between superb and mediocre starts. It's worth noting that he was facing a tough opponent on Wednesday, and while his ERA climbed to a disappointing 4.75, he still has a 2.94 xFIP and 49:10 K:BB across 36 IP. He has been a bit unlucky with a 20.6% HR/FB, but that number, as well as his ERA, should come down over time. With the highest strikeout rate of his career, this could be the year Heaney finally posts his first sub-4.00 ERA since 2015.

Hernandez bashed 2 HR's and drove in 3 against the Braves on Wednesday, raising his slash line to .293/.338/.507 for the season. He has heated up since returning from the IL at the end of April, hitting .348 (16-46) with 4 HR's and 15 RBI in his last 12 games. Perhaps most impressive though is that he has cut his K% to 13.7% during this stretch, lowering his season rate to 26.3%. This is coming from a guy who struck out over 30% of the time in each of his past 4 seasons. We know the power is real and his spot in the heart of the Blue Jays order is prime to drive in plenty of runs. If he can continue cutting back on the strikeouts, we could be talking about a real star.