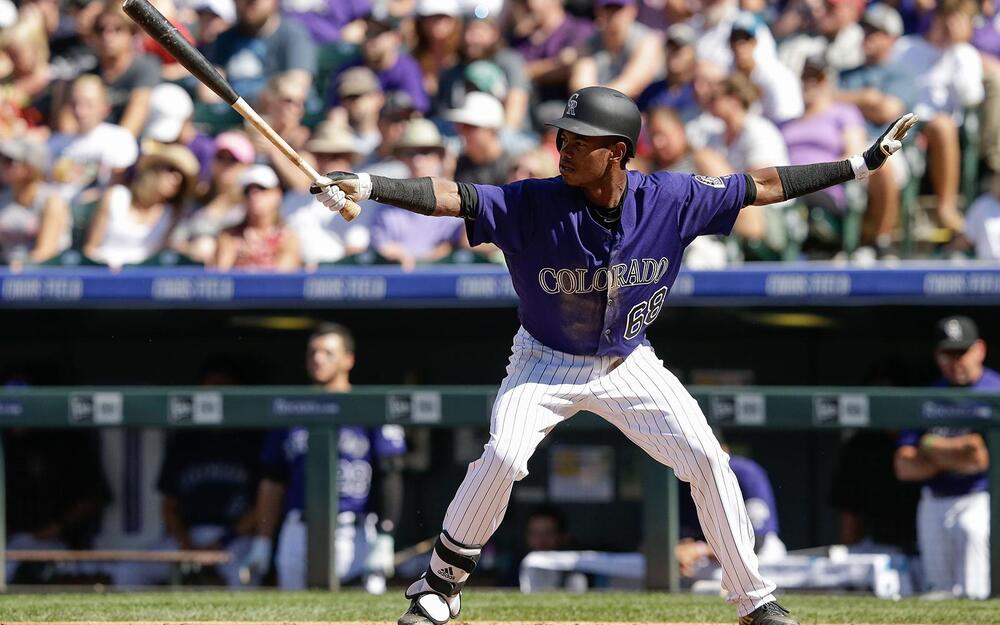 Freddie Freeman (1B - ATL) - Freeman extended his hitting streak to 6 games with a 2-4, 2 BB night against the Red Sox that included his 16th HR of the season. Freeman has had one year in his career with a BABIP under .318, and that was .295.....he entered Wednesday with a .240 mark. That's really the crux of his underperformance this year, and I wouldn't say that it's justified: his pull% of 32.3% is actually low for him, and the LD rate of 25.8% is a touch low but still excellent. The contact rate is his usual 80ish percent as well.....everything looks fine, except the AVG itself. I expect it to continue to trend upward as we move into summer, and I fully expect Freeman to be much better in the second half just through the BABIP regression to the mean.

Raimel Tapia (OF - COL) - Tapia entered Wednesday's contest hitting 400/400/567 in June, and obviously bumped that up with a 3-5, 2 2B afternoon against the Padres. Tapia has the build of a guy that could hit for power is he bulked up a bit, but at this point I think we have to accept that he's going to be a 10-15 HR guy at best. That can work though, as he's also a 10-15 SB guy that is a good bet to hit around .300 for a team that scores a bunch of runs. I've been very impressed by the improvement in his contact ability over the past two years, and I think that his skill set is one that is becoming more rare in baseball by the year. As such, Tapia is a bit underrated, and certainly a worthwhile starting OF in all formats.

Sandy Alcantara (SP - MIA) - Alcantara was brilliant again on Wednesday, allowing an unearned run in the 9th to lose 1-0 while scattering 6 singles and a walk over 8 1/3 innings with 7 K's. That gives him 3 straight QS and 5 out of his last 6, and for me he's worked his way into the top 25 SP. The swinging strike rate is up quite a bit despite a stable K rate, but the big things for him have been the twin improvements in control and GB rate over the past two seasons. He's also added a mph to his fastball in each of the past two years. Everything looks very promising for him right now outside of the lack of run support, that's for sure.

Lamonte Wade (OF - SF) - Wade continues to energize the Giant offense from the leadoff spot, hitting his 4th homer and stealing his 2nd base in just 75 PAs. His best skill is his plate discipline, but Wade is a solid contact hitter with good speed (although he isn't a big basestealer) that seems to have picked up a little pop this season with an exit velocity that is up about 5 mph. It's a small sample size to be sure, but if he's going to provide an EV around 90 with that discerning batting eye, he's going to be a very solid leadoff hitter. I think he's a must-add in OBP-based formats, and he's getting close in standard leagues as well. Hitting leadoff in a top-10 offense is absolutely adding value here.

Abraham Almonte (OF - ATL) - Almonte has started the last 9 games for the Braves, and on Wednesday he went 2-3 with 2 doubles and a walk while batting cleanup during a 10-8 loss to Boston. I think we are all used to Almonte as a failed prospect at this point....he's 31 and has bounced around 6 teams over the past 6 seasons. Interestingly, he's actually been hitting for much more power over the past 3 seasons, it's just that he only has 100 PAs at the big league level over that span. His contact rates are decent, he walks a ton due to a very solid batting eye, he has a little speed, and now there seems to be some power.....I'm intrigued. He definitely looks like he will play just about every day until Ozuna returns, unless the Braves want to give Pache or Waters a shot at some point. There are far worse injury replacements out there than Almonte, particularly in OBP-based formats.