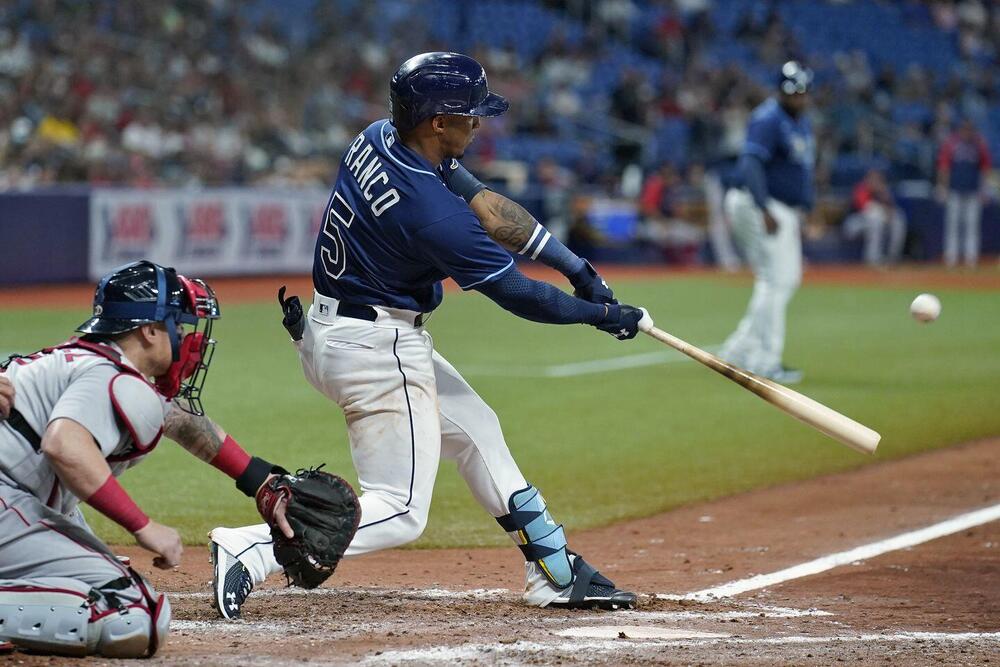 Franco made his long-awaited and much anticipated MLB debut for the Rays on Tuesday and he did not disappoint, going 2-4 with a double, a HR, and 3 RBI in a loss to the Red Sox. Franco has had elite contact rates throughout his MiLB career and has hit over .300 at every level. He has also mixed in some power and speed, most recently hitting 7 HR's and stealing 5 bases in 39 AAA games. He has the potential to be a 5-category player and should be owned in all formats given his ceiling. The Rays batted him 2nd in their lineup for Tuesday's game, and assuming that sticks, that should only help Franco put up more counting stats. Also of note is that Franco played 3B in his debut, even though he primarily played SS in the minors. If the Rays plan on doing this regularly, he may very soon gain multi-position eligibility.

Baddoo went 2-5 with 2 runs scored against the Cardinals on Tuesday, extending his hitting streak to 9 games. During this streak, Baddoo is hitting .406 (13-32) with an excellent 5:5 K:BB. After a sizzling hot start to the season, Baddoo endured a gigantic slump and it looked like he would possibly be demoted to the minors. But he has heated up recently, ending any thoughts of such an idea, at least for now. The biggest improvement for Baddoo has been his contact rate as he lowered his K% from 37.1% in April and May to an incredible 14.3% so far in June. He still hasn't shown much power for a while, but he's on a good track at least for his BA.

Kirilloff went 2-4 with a double and 2 RBI against the Reds on Tuesday, and his BA has now risen to .267 for the season. Since returning from a wrist injury about a month ago, Kirilloff has hit .288 with a very solid 19.5% K% through 28 games. However, his power has all but disappeared. He has hit just 1 HR in those 28 games and produced an ISO of .096. His EV has dropped to a run-of-the-mill 89.3 mph compared to 96.5 before his injury. His FB% meanwhile has fallen from 43.3% to 17.9% over the same time frame. It's fair to wonder whether the injury is still affecting him in some way, although that would be pure speculation. Either way, Kirilloff needs to start hitting for power again if he is going to be a significant fantasy contributor. Even his BA is likely not sustainable without more HR's; he has needed a .358 BABIP over the last month just to get his BA where it is now.

O'Hearn returned to the Royals lineup on Tuesday following a stint in the minors, and went 2-4 with a HR and 2 RBI out of the cleanup spot. It's kind of funny how a player can go from being demoted to the minors to batting cleanup in such a short period of time, but it seems that the Royals are confident that O'Hearn has figured things out. In case you're wondering how he did while he was in the minors, O'Hearn hit .375 with 12 HR's and 25 RBI in 19 AAA games, so it makes sense that the Royals want to give him another shot. Obviously, the majors and minors are very different, but don't forget this is a guy who hit 12 HR's in 44 games as a rookie in 2018 and has posted an EV of at least 90.7 in each year of his career, so we know he can do it at this level. He's someone to keep an eye on if you're searching for power off the waiver wire.

Rodriguez allowed 5 runs (3 ER) in 6 IP against the Rays on Tuesday, striking out 7 and walking one in the contest. It's been a really rough stretch for Rodriguez, who has now allowed at least 4 runs in 7 of his last 8 starts, although at least this time, it didn't hurt his ERA because two of the runs were unearned. The weird thing is that he still has an excellent 85:19 K:BB through 72.2 IP, and both the strikeout and walk rates would be the best of his career. He has allowed a .380 BABIP despite not giving up a ton of hard contact (35.1% HardHit%) and his LOB% is a ridiculously low 61.6%. Overall, his 3.51 xFIP would also be a career best and is over 2.5 runs lower than his ERA. Despite his struggles, he's still someone to target in fantasy as everything points to him turning this around.