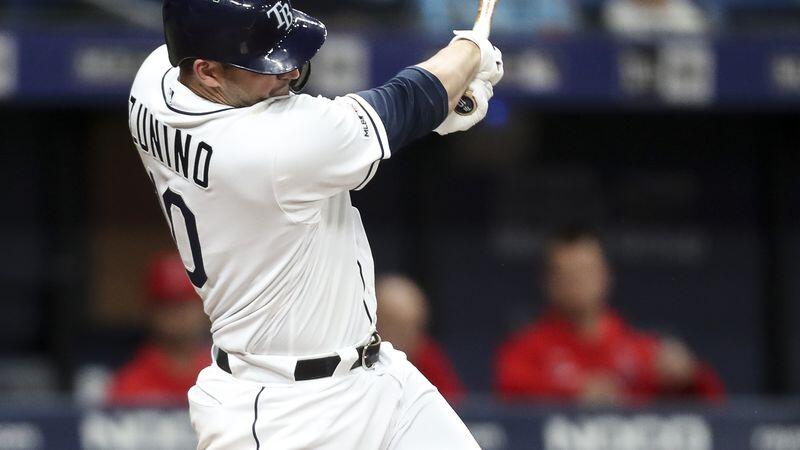 Zunino went 2-4 with his 24th HR of the season. Zunino has now homered in 3 games in a row and is second among all MLB catchers in home runs (24) despite playing in just 80 games. He has always been a power first contact guy second as evidenced by his 60% contact rate but .536 SLG% this season. While he is still striking out at a big-time 38% rate and barely hitting above .200 a 47% barrel rate, 26% barrel rate and 91mph exit velocity have made most of his hits go far and his .847 OPS makes him a valuable fantasy asset.

Chang tripled and hit his 3rd HR of the season Friday night. Chang hasn't gotten it going over parts of 3 seasons with the Indians and even Friday's big game raised his season line to .195/.234/.346. Chang has a 28% K rate while drawing walks in just 4% of his plate appearances this year and he struck out in droves in the minor leagues as well. Chang was hitting well in minor leagues slashing .322/.394/.610 with 4 home runs over 15 games. With Cleveland falling out of the playoff picture Chang could get a chance to show what he can do down the stretch and if he hits could be an interesting fantasy piece as he has played games at 1B, 2B, SS and 3B this season.

Marte went 1-5 with an RBI Friday night. What an absolute great trade for the Athletics, especially with Ramon Laureano being suspended the rest of the season. Marte has been sizzling since the trade to Oakland slashing .415/.456/.585 with 3 doubles, 2 HR, 9 RBIs and 10 runs scored. Most notably he been untouchable on the basepaths going a perfect 9 for 9 in stolen bases over 12 games and for the season has swiped 31 bags in 34 tries. He has only appeared in 75 total games due to injury, but this may be his finest season yet, even at age 32 as he is on pace for his 3rd career 40+ stolen base season. Now, Marte has been a beneficiary of a big time .398 babip to fuel the batting average but he also has a 10% walk rate - the first time in his career he has ever walked more then 7%. He has proven to be a gamechanger on the basepaths, and stole a base in 4 straight games earlier this week - make sure he is plugged into your lineup daily.

McClanahan allowed 2 ER over 5.1 innings, striking out 6. While McClanahan has gone just 84 innings over his 17 starts, the 24-year-old Rookie has been effective for Tampa pitching to a 3.37 ERA /3.56 fip with a good 28% K rate and decent 8% walk rate. When he isn't striking out batters, he has been an effective groundball pitcher picking up groundballs on 46% of the batted balls he has allowed. The former 2018 1s round pick only has 127 minor league innings after not playing last year so his arm is still fresh - and his max pitch count has been going up each month. He has gone 6+ innings each of his past 3 starts and has been maxed out at around 90 pitches for the past 5.