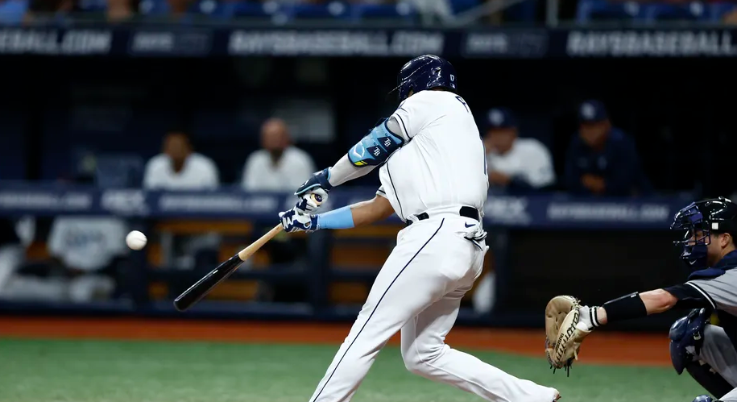 Isaac Parades, Tampa Bay Rays - Isaac Parades did a month's worth of damage in one game against the Yankees with three homers and four RBI. Even with this crazy game, his month of June has been completely awful as this game alone created a .150 boost to his slugging percentage and jumped his OPS to .931 for the month. He's hit five homers now for the month but it's his first in over a week and there were a chunk of 0-fer's in that span as well. A couple of good notes about Paredes is that he's running a great 15% strikeout rate paired with a fine 7% walk rate. The hard-hit rate is fine at 37% as well, but the overall stat line is just awful outside of this game. Don't over-react to anything here but you can just tip your cap to the great performance.

Bligh Madris, Pittsburgh Pirates - Bligh Madris hit his first career homerun on Tuesday in a 1-for-4 performance in his second game of his career. His MLB start is off to a strong beginning with four hits over his first two games in eight at-bats. He also swiped his first career stolen base in his first game Monday. Madris was having a fantastic season in AAA with a 141 wRC+ before getting the call to the bigs and he was easily outpacing his highest homerun total with five over 46 games in the minors. As a 26 year-old repeating AAA for the second time, we should expect solid numbers from a player in that situation. I'm just kind of monitoring this for now but anytime you can see a homer/steal combo over their first two games it's something to monitor.

Spencer Strider, Atlanta Braves - Spencer Strider's hot start in the rotation got a bit of an ice bath on Tuesday as he was tagged for six runs over 3.2 innings against the Giants. He struck out four batters, walked one, and allowed a single homerun. Strider posted a solid 29% CSW in the outing and still generated six whiffs on 25 swings on his fastball. I'm not worried about Strider after one tough start against a solid team, but I do wonder how the Braves approach him going forward as he's already roughly halfway to his innings total from last season in the minors. I expect him to move back to the pen at some point to limit his innings, but he'll for sure be around until the all-star break in the rotation and then we'll see how they adjust with Mike Soroka likely being in the mix for the second half of the season.

Max Scherzer, New York Mets - Max Scherzer turned in a rehab start for the Binghamton Mets on Tuesday in his first appearance in a game since his injury shut him down for some time. He struck out six batters over 3.1 innings on the mound and he tossed 65 pitches. This was his biggest step towards getting back in the rotation and I would guess that we see him make about two more starts before he makes his return to the team.

Zac Gallen, Arizona Diamondbacks - Zac Gallen turned in a monster start against the Padres with 11 strikeouts over six innings. He earned a no-decision in the outing as he left with a tie game. Gallen posted a 33% CSW in the start with a 34% whiff rate, and the 11 strikeouts are easily a season high and almost matched his entire total for the month of April. Gallen has been a fantastic fantasy starter this year and it looks like the hope we had for him pairing with Brent Strom is here to stay.