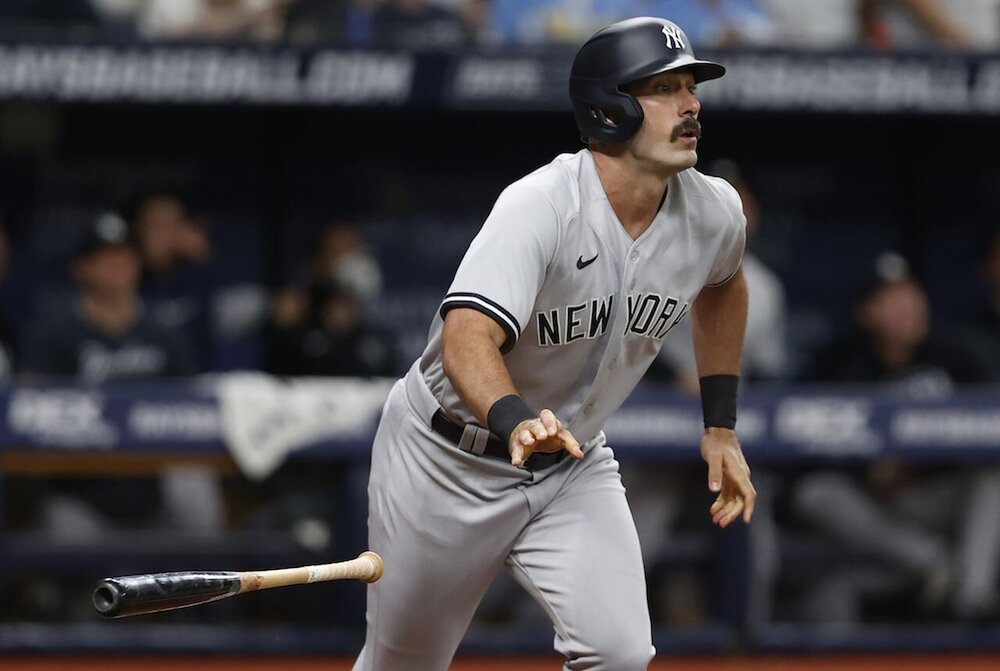 Matt Carpenter (OF-NYY) went 1-3 with a walk and a solo shot against Kansas City on Saturday. The 36 year-old has seemingly rejuvenated his career in New York, as he now boasts a .311 average to go with 15 dingers and 36 RBI across 128 plate appearances; he started in place of Joey Gallo on Saturday, although that might not be saying much based on Gallo's struggles this season (.159 average, 12 homers, 24 RBI over 273 PA). Carpenter has largely been his old self at the dish, drawing walks at a healthy 13% clip while fanning at a 25% rate that is his lowest in that department since 2018. With a 45% hard-hit rate (per Statcast) that is his highest since 2018 to go with a launch angle of 23 (his highest since 2017), Carpenter is capitalizing on the short porch at Yankee Stadium (58% pull rate) to produce.

Teoscar Hernandez (OF-TOR) went 1-3 with a 3-run dinger against Detroit on Saturday. The 29 year-old has turned his season around after a slow start and is now batting .270 with 14 homers, 49 RBI, and 5 steals through 315 plate appearances. Yes, it appears highly unlikely that he will come close to matching his .296-32-116-12 line of a season ago, but given his early-season struggles and an IL stint that cost him nearly a month of games, Hernandez hasn't been a bust, especially when you consider his wRC+ of 124 this year (it finished at 132 last season). His strikeout rate is up a bit to 28% (he trimmed it to 25% last season) but on the plus side his hard-hit rate comes at a robust 51% per Statcast while he's continued to rip liners (22%) and hit flyballs (33%) at healthy rates. It's worth noting, however, that his 44% groundball rate - which is by no means high in a vacuum - is a bit high for him (39% career). But that can be largely attributed to his worst month - May - in which he hit grounders at a staggering 60% rate; his 37% groundball rate in July suggests that he's back to more of his 2020-2021 form.

Corey Kluber (SP-TB) largely kept his old team in check on Saturday afternoon, with the exception of one pitch that Andres Gimenez knocked out of the park for a 3-run homer. The 36 year-old righty finished the day allowing 4 runs on 8 hits and no walks while racking up 10 punchouts over 6 innings of work. He was efficient on the mound, tossing 66 of his 89 pitches for strikes. Enjoying what could very well be his first full season since 2018, Kluber owns a 4.03 ERA, 8.1 K/9, 1.4 BB/9, and 3.84 xFIP across 20 starts (105 innings). While his 11% swinging-strike rate and K-rate highlight that he is more of a pitch-to-contact guy than he was in his younger days, Kluber's walk rate is tied for the lowest of his career while he's limited the opposition to a 30% hard-hit rate. So while he's certainly no longer the fantasy (and real) ace of old, Kluber is a dependable back-end option for fantasy rotations. He's currently slated for what should be a favorable start in Detroit against the lowly Tigers this coming week.

Luis Castillo (SP-SEA) was traded from Cincinnati to Seattle on Friday and the move likely brings more positives than negatives for his fantasy owners. The 29 year-old righty is in the midst of another strong season, as he owns a 2.86 ERA, 9.5 K/9, 3 BB/9, and 3.39 xFIP across 14 starts (85 innings). He was particularly sharp in July, logging a 1.93 ERA, 9.6 K/9 2.3 BB/9, and a 3.23 xFIP over 28 innings of work. In moving to the AL West, Castillo will not face Houston during the regular season as the Mariners and Astros have faced off for the final time, although multiple series with the Yankees lie ahead; the schedule includes, on the other hand, multiple series with Detroit and Oakland. The move from Cincinnati to Seattle entails a ballpark upgrade for a pitcher, and the bullpen situation is considerably better in the latter than the former as well. Look for Castillo to continue his run of success with the Mariners, although he does appear slated for a test this coming week in a road start against the Bronx Bombers.

Nick Lodolo (SP-CIN) is in the midst of a tumultuous rookie campaign, as he missed significant time because of a back issue and has otherwise amassed a 4.73 ERA, 1.67 WHIP, 13.1 K/9, and 3.9 BB/9 across 7 starts (32.1 IP). The 24 year-old southpaw's 3.40 xFIP does indicate that he's run into considerable bad luck, as a .432 BABIP and 19% HR/FB are both high. His 3.25 SIERA and 4.18 xERA also suggest that his ERA is well above what it should be based on his skills. The control issues have been uncharacteristic given his track record of plus control in the minors (which aligns with his high scouting grade in that department) while the sinkerballer's homer issues have also been uncharacteristic. As he prepares to take on the Orioles at home on Sunday, it's worth noting that Lodolo has been most effective at home, with a 3.20 ERA, 12.1 K/9, 3.2 BB/9, and 3.32 xFIP to his name over 25.1 innings of work. He's therefore worth a look for fantasy against Baltimore, a team that ranks in the bottom 10 of the MLB against LHP.