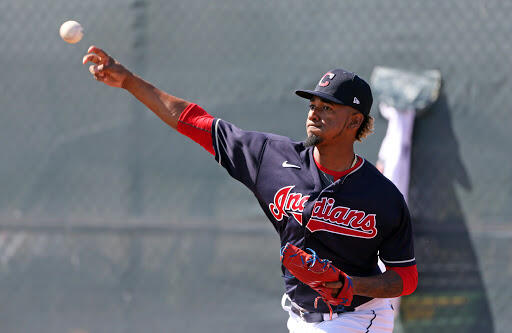 Clase collected his 21st save of the season with a three up three down 9th inning in Boston. The 24-year-old hasn't given up a hit or a run in his last seven outings and has been incredible this season. Clase doesn't have an overwhelming K-rate (9.36 K/9), but his stuff has proven itself in 41.1 innings thus far. His 18.4% Hard% and 1.0 Barrel% rank second in the majors, while his 49.8% O-Swing% ranks first (min 40.0 IP). Clase primarily uses just two pitches (cutter and slider), which are extremely effective (10.0 wFC and 5.0 wSL). If he adds a third pitch to his repertoire in the future, he could become even more devastating. For now, I guess Clase owners will have to be happy with a 1.31 ERA that ranks third for pitchers with 40+ IP and a .186 wOBA that ranks second.

Miranda kept his bat hot on Wednesday afternoon with three hits, including a solo home run. The youngster took stud Corbin Burnes deep in his first plate appearance and added a pair of singles later in the contest. Miranda has now compiled three consecutive three-hit games and is hitting .347 with eight homers and a .390 OBP since May 20th. The 24-year-old's aggressive plate approach (10.0% SwStr%, 19.5% K%, 4.2% BB%) will see him endure some rough stretches. However, with a 90.0% Contact% and 41.1% HardHit%, he is proving that he can do damage at the plate. The problem is that Miranda hasn't found a home in the field yet. He mainly plays first base (267.2 innings), and the Twins have All-Star Luis Arraez settling in there and Miguel Sano, who just returned from injury on Tuesday, also in line for starts at First Base. Miranda's secondary position is Third Base (136.0 innings), but the Twins typically have offseason addition Gio Urshela handling the hot corner. Regardless, Miranda has been much more effective at the plate than Urshela and Sano this season, so if he keeps this production up, it will be hard for Manager Rocco Baldelli to keep him out of the lineup.

Diaz collected three hits, including an RBI double, in the Rays' victory over the Orioles on Wednesday evening. After a down 2021 campaign, the 30-year-old Third Baseman has found his groove once again here in 2022. With a 14.5% BB% and 10.&% K%, Diaz has displayed excellent bat control that has led to a hefty .294 AVG and .405 OBP. He has proven a very valued leadoff man for the Rays; unfortunately, with little power (4 HR, .108 ISO) or speed (1 SB, 3 CS), Diaz isn't as valuable for fantasy purposes. However, in category leagues, he won't hurt you in many categories, he has 1B and 3B eligibility, and he is available in 44.8% of ESPN leagues.

On Wednesday afternoon, Tellez went 2 for 4 with a pair of three-run home runs. He now has 20 homers and 64 RBI on the campaign, making him one homer shy of his career-high 21, while his RBI total is already a career mark. This season, Tellez has been hitting many more fly balls (44.9 FB%) and fewer line drives (14.5% LD%). This has helped him get the ball over the fence more, though it's also caused his average to dip (.230). Overall, it's hard to complain about the new approach as Tellez has posted a career-high 45% HardHit% and 8.9% BB%.