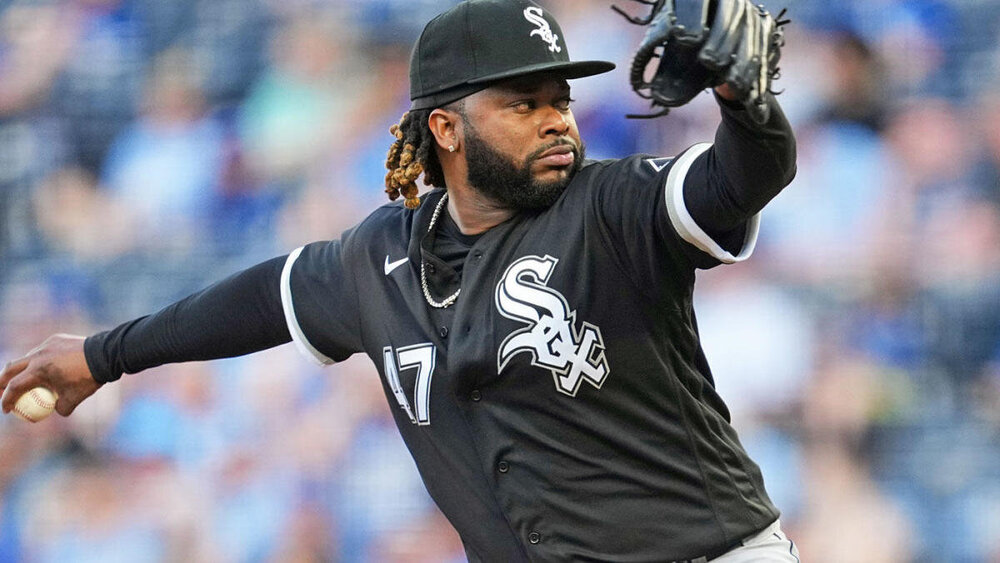 Johnny Cueto (P - CWS) - Cueto baffled the Astros for 8 innings on Monday, allowing 6 hits and 2 runs (1 earned) despite only striking out 3. That's Cueto's 9th straight QS, and through 16 starts he's allowed more than 3 earned runs ONCE despite the lowest K/9 rate of his career (6.0 prior to the contest, and under 6 now). There are lots of things you can point to that scream regression, from the lack of bat-missing to the portion of the schedule that involves the AL Central, but I will tell you this: Johnny Cueto, in his 15-year career, has never had an ERA worse than league average when he walks less than 3 batters per 9. In 10 of his 15 seasons he's managed that feat, and in all 10 he has been at least average in terms of ERA (last season he was just barely average). He does a reasonable job of avoiding hard contact, he doesn't issue free passes, and he basically always keeps you in the game. I typically don't love low-K pitchers, but I've always liked Cueto and it's fun to see him having success with stuff that is certainly a far cry from what he had in his heyday. Could he be your 5th starter down the stretch? With a mid-September run against the A's, Tigers, and Tigers and 0 above-average offenses on his personal schedule until the last week of the season (MIN), I don't see why not.

Michael Massey (2B - KC) - Massey doubled twice on Monday against the Twins, giving him at least one hit in 10 of his first 11 big-league starts. He isn't a very highly-touted prospect, but I'm always intrigued by players that seemingly get better as they move up to each higher level, and Massey has done exactly that. He also falls into a category of players that are notoriously difficult to analyze: 2019 college draftees. With a half-season of short-season ball and then the lost season of 2020, there's very little to go on for players that normally would be well overage for their competitive level in 2021. Massey hit 21 HR in 99 games at high-A last year, and he's hit 16 in 87 games at AA and AAA this year before coming up to KC. He's walked more and hit for a higher AVG at every level, and his exit velo in this admittedly small sample through a dozen games in KC is well above average. As a middle infielder, I think he has to be worth a speculative pickup in all formats despite the lack of pedigree, just by the virtue of what he's done. As Bill Parcells famously said, "you are what your record says you are".

Kerry Carpenter (OF - DET) - Kerry Carpenter only played in the nightcap on Monday, but the 24 year old went 3-4 with a double and a homer in just his 4th MLB contest. Carpenter may not have looked like much of a prospect coming into this season, but an offseason spent with the same hitting coach that worked with Aaron Judge and Ian Happ has clearly changed something. Carpenter hit .313 with 30 HR in just 97 games at AA and AAA before coming up to the Tigers last week, numbers that simply cannot be ignored. The contact rate wasn't all that bad either, so the first few games that saw him whiff 6 times in 8 ABs look more like an aberration than expectation. I definitely see him being worth a pickup if you like taking risks...playing his first game in the field today should help matters there too.

Gavin Lux (2B - LAD) - Lux homered and walked against the Brewers Monday night, continuing his hot hitting in the second half (he came into the contest at 310/390/479 since the ASB). Lux has superior contact skills, but the power that he has shown at times throughout his pro career has been mostly absent this season. The Statcast data does not like him one bit, but I see a player that has added 10% to his contact rate since his arrival in LA to become a very good contact hitter, and he's likely going to give you around 10 HR and 10 SB this year in a year where it feels like he hasn't quite fulfilled his potential. The 24 year old is still maturing as a player, and I do very much think there is more here. Batting 7th/8th in the Dodger lineup does limit his upside a bit, but he's still on pace to score 85-90 runs....I see him as a mixed league starter at MI right now, and absolutely still see the potential for a top-5 2B here.