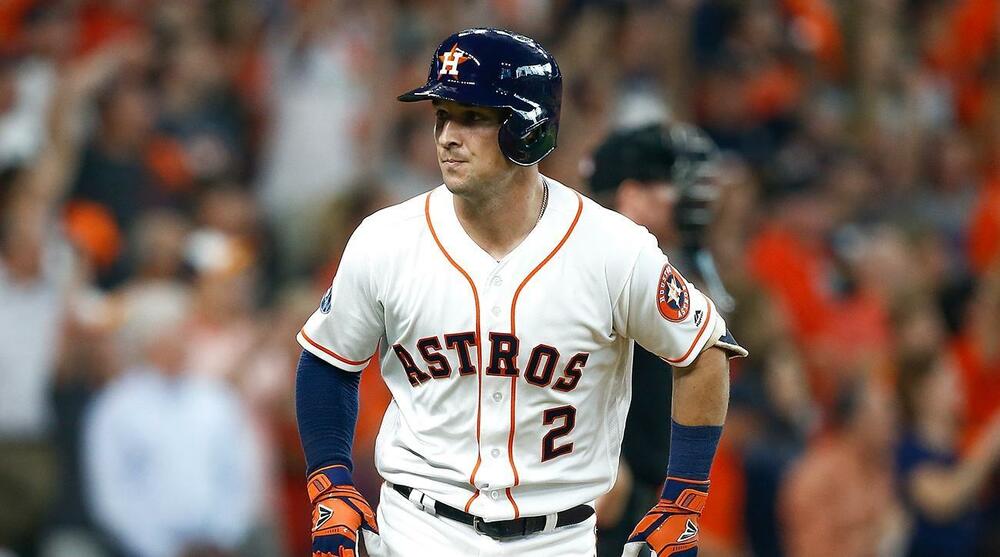 Paul Goldschmidt went 3-for-5 with a double, a homer, two runs, and three RBIs against the Rockies on Thursday. After a quiet pair of games at Coors Field, Goldschmidt erupted in the series finale slugfest by falling a triple shy of the cycle in his first three-hit game since June 27. Goldschmidt's eighth-inning dinger was his 27th of the season and third already in August, as he's opened the month on fire by hitting .367 with six extra-base hits and nine RBIs in nine games. The 34-year-old veteran has shown no signs of slowing down during the dog days of summer and continues to march along on his journey to win his first MVP award. He's currently leading the NL in all three triple-slash stats and has impressive counting numbers as well, solidifying his case as the best hitter in the Senior Circuit this year.

Framber Valdez cruised to an easy win over the Rangers on Thursday, firing seven shutout innings while allowing four hits and one walk with eight strikeouts. Valdez was in complete control here against a lackluster Texas squad, slinging 74 of his 103 pitches for strikes and not allowing any extra-base hits. It also helped that the Astros scored seven runs for him, enabling him to pound the strike zone. The win improved Valdez's record to 11-4 (matching his career-high in wins) while lowering his ERA to 2.73, which would be a full-season best for him. The 2022 All-Star has been the model of consistency this year, allowing three earned runs or less in 19 straight starts and 21 of 22 overall. He's officially matchup-proof and is a must-start every time he takes the mound, including his upcoming road start against the inconsistent White Sox.

Alex Bregman went 2-for-2 with a homer, three RBIs, and two walks against the Rangers on Thursday, powering the Astros to a 7-3 victory. Bregman launched his 14th long ball of the year in the fifth inning, extending Houston's lead to 5-0 at the time. The former MVP runner-up has opened August on fire, hitting safely in eight of nine games to begin the month while batting .400 with nine runs and eight RBIs. While his overall numbers are somewhat disappointing relative to his previous standard, he's still having a solid all-around campaign with 14 taters, 59 RBIs, 62 runs, a .793 OPS, and more walks (62) than strikeouts (58). That may not be MVP-caliber, but it's still borderline All-Star level.

Dylan Cease was the hard-luck loser on Thursday after ceding just one run to the Royals on three hits and two walks over six innings while striking out eight. Cease's only mistake was a second-inning solo homer, but unfortunately for him Chicago didn't score until the final two innings when it was already too late. The loss was his first since July 7, snapping a streak of five straight victories and bringing his record down to 12-5. His ERA improved slightly to 1.96, and he now has 174 strikeouts in 128 2/3 innings. Cease is on an incredible run of allowing one earned run or less in 14 consecutive starts, permitting just six earned runs total in 82 innings during that span and bringing his ERA down all the way from 4.24. He's been one of the best pitchers in baseball this year and will look to continue his historic run at home in a tough matchup against the Astros next week.

Nolan Gorman went 2-for-4 with a solo homer, two runs scored, and a walk against the Rockies on Thursday. Gorman powered up for his 13th homer of the season, six of which have come in his last 19 games. He only has seven RBIs to show for it during that span, however, as five of those round-trippers have been solo bombs. The 22-year-old rookie has shown impressive pop (especially for a second baseman) with 13 taters through his first 65 career games, although his .242 average and 31.2% whiff rate are reminiscent of Trevor Story's rookie campaign. He's been moved back up to the two-hole after being dropped in the order during a horrific July slump, but it's clear he's going to be a streaky hitter if his high strikeout rate persists. Ideally he'll be able to cut down on that going forward and become even better as a hitter, but for now his power still makes him a good fantasy option.