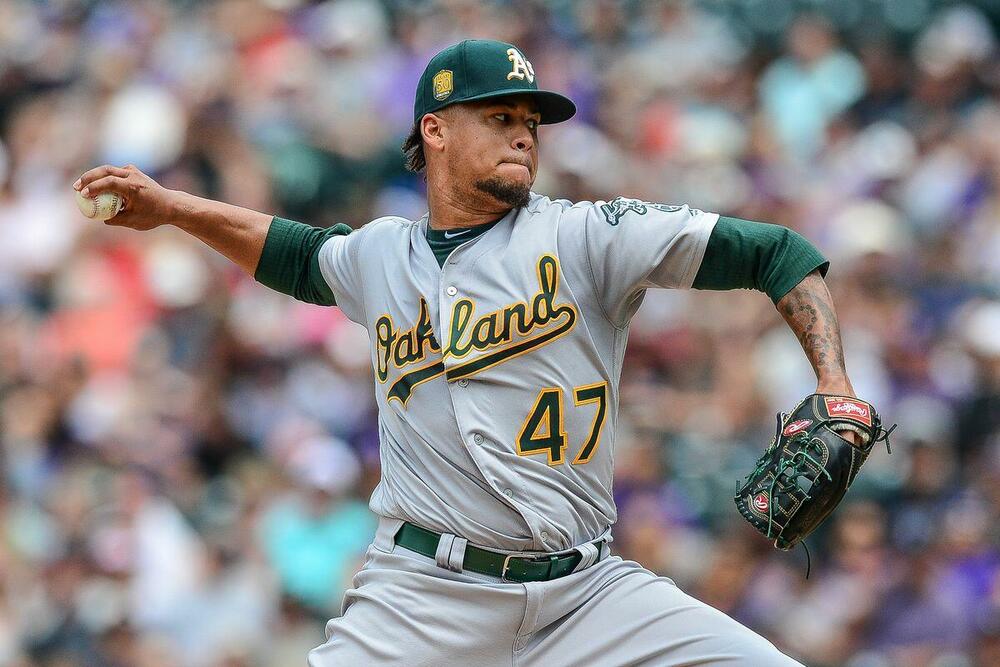 Montas was traded to the Yankees on Monday alongside reliever Lou Trivino, ending the right-hander's 6-year tenure with the A's. Montas has been excellent this season with a 3.18 ERA, 3.21 xFIP, and 109:28 K:BB though 104.2 IP (19 starts). His ERA is at risk of rising with the move to New York - Yankees Stadium is a far better hitter's environment than Oakland Coliseum, and since joining the A's in 2017, Montas has produced a 3.33 ERA at home compared to 4.15 on the road. On the other hand, the win potential for Montas has vastly increased; he will now be pitching for the best team in baseball after he was only able to secure 4 wins with Oakland this season despite tossing 10 quality starts in 19 tries.

With Lou Trivino heading to the Yankees, Puk would seem to have the clearest path to saves in the Oakland bullpen. Puk has been very solid for the A's this year, recording a 2.08 ERA, 3.35 xFIP, and 45:10 K:BB across 43.1 IP, while also limited hard contact with a 31.0% HardHit%. He currently owns a 10.1 inning scoreless streak which had already propelled him into the 9th-inning mix while Trivino was still on the roster. Both of Puk's saves this season have come since the all-star break, so things were already trending towards more opportunities and that is certainly the case now. The A's may not win a ton of games, but Puk should still have plenty of value if he is indeed to act as the regular closer.

Mancini was traded from the Orioles to the Astros on Monday in a three team deal that also included the Rays. The longtime Oriole has had a decent season thus far, hitting .268 with 10 HR's in 92 games, while playing primarily at 1B and DH and occasionally in the outfield. It will be interesting to see where the Astros play Mancini, as they already have Yordan Alvarez at DH and Yuli Gurriel at first base, although Gurriel has struggled this year and is likely the one who will lose the most playing time. While Mancini should be expected to play regularly, he may actually lose at bats as a result of this trade because of the Astros depth. He's also likely to bat lower in the Houston lineup than he did in Baltimore, although the strength of the Astros lineup should help Mancini in terms of run production.

Gurriel may be in line to lose playing time going forward with the Astros adding 1B/DH Trey Mancini via a trade on Monday. Gurriel has struggled this season, hitting just .243 with 7 HR's in 94 games, after winning the AL batting title with a .319 BA in 2021. He is still making contact at an excellent rate, but his EV has dropped to 87.8 this year whereas that number had been at least 89.3 each of the past 5 seasons. The good news for Gurriel is that he has been playing better lately, hitting .289 with an 89.1 EV during the month of July. Still, the Astros wanted to upgrade their offense, and that likely means less at bats for Gurriel. He should still play regularly against left-handers, as he's hitting a respectable .266 with a .751 OPS against them. But that won't be enough to salvage his already teetering fantasy value.

Quintana was traded by the Pirates to the Cardinals on Monday alongside reliever Chris Stratton. It has been a surprisingly good season for Quintana who has recorded a 3.50 ERA (3.79 xFIP) across 20 starts for Pittsburgh, although he has only managed to scrape up 3 wins thus far. If he keeps this up, Quintana would finish with his first season of having an ERA under 4.00 since 2016. There are reasons to be skeptical if he can keep this up though, as Pittsburgh is one of the best environments for pitching, and Quintana has produced a 2.42 ERA at home this season compared to 5.22 on the road. On the plus side, he shouldn't have nearly as difficult of a time collecting wins with the Cardinals. Still, he's unlikely to be more than a streaming option down the stretch for fantasy owners.