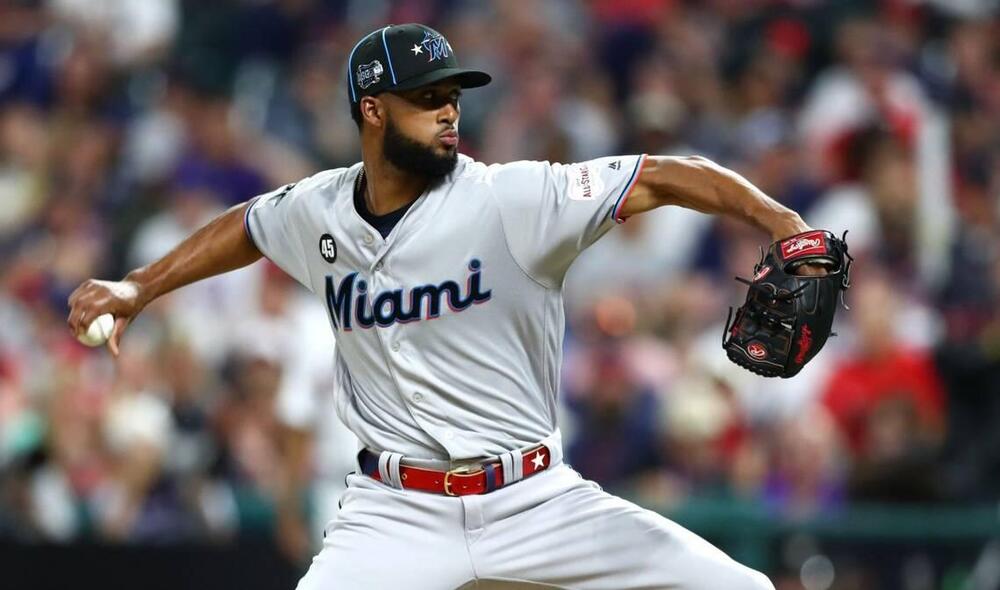 Sandy Alcantara settled for the tough-luck loss on Friday as he was outdueled in a 1-0 loss to the Brewers by Corbin Burnes. Alcantara did his best, though, firing eight innings of one-run ball while giving up five hits and no walks with eight strikeouts. Just another day at the park for Alcantara, who threw 75 of his 100 pitches for strikes and lowered his ERA to 2.28 despite his record slipping to 14-9. The NL Cy Young candidate added to his case by boosting his MLB-leading innings total to 228 2/3 inning while crossing the 200-strikeout threshold (207). With outstanding ratios and a sub-1.00 WHIP to boot, Alcantara has been everything you could want out of a starting pitcher in 2022. His durability has been especially impressive, as he's averaging over seven innings per start. The 27-year-old workhorse has now logged at least eight innings in three consecutive outings, allowing just one earned run in all three of those starts. After an up-and-down August and a rough start to September, Alcantara righted the ship this month with just five earned runs allowed in 32 innings over his four most recent turns. Alcantara has been one of the best pitchers in baseball wire-to-wire this year and is certainly worthy of his first career Cy Young award. Nobody in the NL can match his elite combination of quality and quantity.

Rhys Hoskins helped the Phillies to a 5-1 win over the Nationals on Friday, going 2-for-5 with a homer and two RBIs. Hoskins kicked off the scoring with his solo shot off Erick Fedde in the top of the first and later provided a key insurance run with an RBI single in the top of the ninth. The long ball was Hoskins' 30th of the year, marking the second time in his career and first since 2018 that he's reached that threshold. The 29-year-old slugger has come up big for Philadelphia down the stretch as the team battles for a playoff spot, batting .310 with eight extra-base hits and seven RBIs over his last 10 games. It's encouraging to see him hitting for so much power given that his ground-ball rate (35.9%) is the highest of his career and he's pulling the ball less frequently than ever (28.5%). Hitting the ball more to center field may have helped his batting average a bit, as his .253 mark is the highest full-season mark of his career and 10 points higher than the MLB average. While he's still a non-factor on the bases (two steals), Hoskins' ability to hit for good power without being a drag in batting average makes him a quality fantasy asset.

Alek Manoah cruised to an easy win on Friday as the Blue Jays pounded the Red Sox, 9-0. Manoah did his part with six shutout innings, giving up just two hits and two walks while striking out four. The 24-year-old righty capped off a brilliant September with another win and quality start, finishing the month 4-0 with a sparkling 0.88 ERA. He's been huge for fantasy managers and the Blue Jays down the stretch, stringing together eight straight quality starts with a 1.00 ERA during that stretch. He's now 16-7 with a 2.24 ERA and 180 strikeouts in 196 2/3 innings, making him worthy of down-ballot consideration in the AL Cy Young voting. Aside from a brief rough stretch in the middle of the season, Manoah was sensational all season, yielding two earned runs or less in 25 of his 31 outings. He never had a truly bad start either, going at least five innings every time and never allowing more than four earned runs. That's the definition of an ace, as Manoah took a big step forward in his second season after putting together a strong rookie campaign last year. If he continues to improve in Year 3, the league better watch out.

Joe Ryan dominated the Tigers on Friday, scattering five hits and one walk with eight strikeouts over six scoreless innings en route to his 13th win. Ryan had little trouble carving up Detroit's punchless lineup, throwing 65 of his 91 pitches for strikes to lower his ERA to 3.55. It was a strong rebound performance for the 26-year-old rookie, who gave up three runs in just four innings against the Los Angeles Angels his last time out. He finishes September with three scoreless outings in the month, posting a 2.20 ERA with 30 strikeouts in 28 2/3 innings. Ryan avoided hitting the rookie wall in his first full season, although he did miss some time with a brief IL stint earlier in the season. While the Twins ultimately faded from contention, Ryan showed promise as a frontline starter for them. His numbers look even better if you exclude one terrible outing where he allowed 10 earned runs in 4 2/3 innings in late July, which accounted for over 17% of his earned runs this year. If you excluded that one bad performance, his ERA improves from 3.55 to 3.03. Ryan's strong finish to the season bodes well heading into 2023 and solidifies his status as a strong fantasy arm to rely on.

Carlos Correa helped the Twins erase the Tigers, 7-0, on Friday, going 2-for-5 with a two-run homer. Correa connected for a two-run shot in the seventh that effectively iced the game for Minnesota, especially against Detroit's horrid offense. The dinger was Correa's 22nd of the season and first since September 15, snapping a 13-game homerless streak. Correa was due to a cool off a bit after slamming six homers during the first half of September, though, and kept swinging the bat well even if his power numbers tailed off, finishing September with a .345 average, seven homers, and 18 RBIs. The strong finish is salvaging a somewhat disappointing fantasy campaign for Correa, whose power stroke often disappeared for long stretches. Going from Houston to a less hitting-friendly park and worse support cast in Minnesota didn't help, either, which partly explains why he has 34 fewer runs and 29 fewer RBIs despite playing only 16 fewer games thus far. While he's been a good player throughout his career, he never quite developed into the offensive monster he was expected to be after his impressive rookie campaign. Perhaps going to a more offense-friendly environment would boost his fantasy outlook considerably.