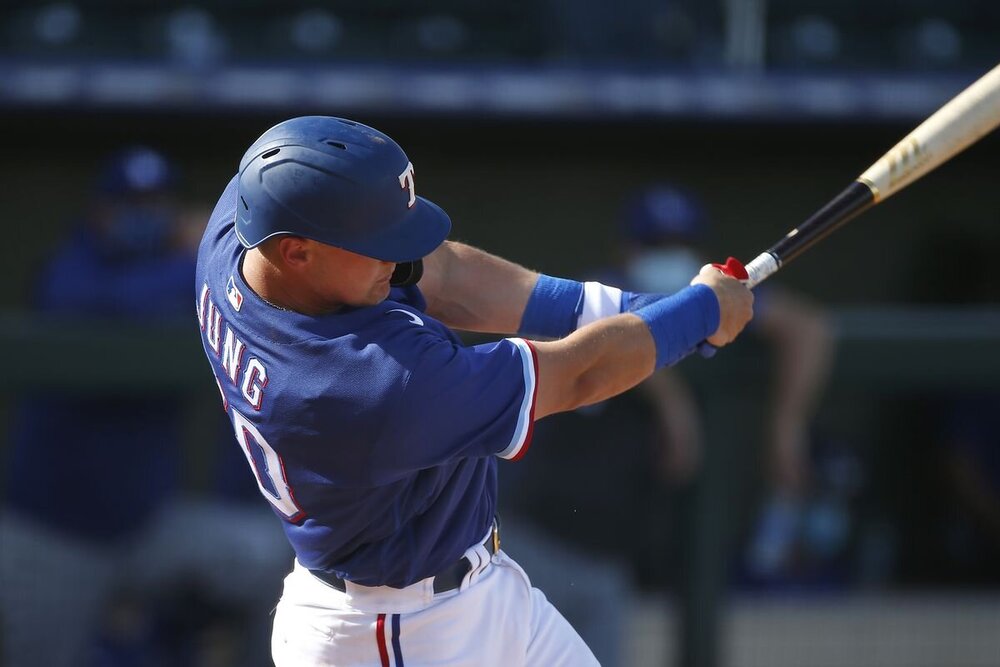 Josh Jung (3B-TEX) made an impression in his big-league debut, as he went 2-4 with a solo homer and a stolen base against Toronto. The 24 year-old was expected to begin the 2022 campaign as the club's starting 3B, but a torn labrum delayed his arrival in the Show. Before getting the call, he hit .273 with 6 homers and 24 RBI across 106 plate appearances in Triple-A, although an uncharacteristic 28% strikeout rate and 4% walk rate suggest that he may have been pressing. After all, he walked at a 12% clip during his 156-PA stint in Triple-A last season while fanning at an acceptable 22% rate. A 2019 first-round draft pick out of Texas Tech, Jung was ranked the #39 overall prospect in baseball (per MLB Pipeline) and possesses a plus hit tool and plus power, the combination of which are enticing for fantasy. The Rangers bided their time in bringing up Jung, but the club has little reason to not play him down the stretch and he has already shown that he can make an impact. Roster him where he's available.

Nico Hoerner (SS-CHC) had a nice game at the dish against the Giants on Friday afternoon as he went 2-3 with a 2-run homer and a stolen base. The 25 year-old batted leadoff, which is probably more of a statement about the state of the Cubs lineup than anything else, but he's put together an all-round productive campaign in which he's hit .288 with 9 homers, 49 RBI, 50 runs scored, and 18 steals (2 caught) across 471 plate appearances, good for an above-average wRC+ of 110. He does not make a lot of hard contact (33% hard-hit rate per Statcast), but rather uses his above-average speed to capitalize on a productive combination of a 21% liner rate and 46% groundball rate, which leaves a 33% flyball rate that allows him to put a few over the fence. With an 87% contact rate and plus speed with a penchant for swiping some bags, Hoerner offers some fantasy value, especially given the relatively low steals totals in today's game.

Drew Smyly (SP-CHC) picked up the W against the Giants on Friday as he fired 7 innings in which he allowed 1 unearned run on just 1 hit and a pair of walks while fanning 8. The 33 year-old southpaw threw 69 of his 104 offerings for strikes in the outing. Smyly has been solid if unspectacular overall in 2022, recording a 3.57 ERA, 7.7 K/9, 2.3 BB/9, and 4.27 xFIP across 20 starts (98.1 innings). With a solid swinging-strike rate of 13%, a below-average contact rate of 76% to go with a modest 34% hard-hit rate per Statcast, and his lowest walk rate since 2013, Smyly should prove to be useful for fantasy in at least a spot-start capacity down the stretch. Although he's seemingly slated for a tough turn in New York against the Mets his next time out, it's worth noting that the Mets rank 21st in the majors against lefties this season in team OPS (.694), so perhaps the matchup won't be as bad as it appears on the surface.

Carlos Rodon (SP-SF) took the loss against the Cubs on Friday afternoon, allowing 2 runs on 3 hits and a walk while racking up 11 punchouts over 5.1 innings of work. Opposing hitters fouled off a lot of 2-strike pitches - which contributed to his early exit at 96 pitches (63 strikes) - and he made just one big mistake that resulted in Yan Gomes hitting a 2-run bomb. The 29 year-old has followed up his breakout 2021 campaign (2.37 ERA, 12.6 K/9, 2.4 BB/9, 3.17 xFIP across 132.2 IP) with what has in some ways been a more impressive season (2.93 ERA, 11.5 K/9, 2.7 BB/9, 2.99 xFIP over 162.2 IP). Yes, the strikeout rate is down and the walk rate is slightly up, but his xFIP tells us that he's been slightly more effective overall, and it's highly encouraging as the season winds down to see him stay strong, whereas last season (left shoulder) fatigue caught up with him after he completed just 42.1 IP combined in 2019 and 2020 as he underwent Tommy John surgery. Rodon has continued to miss plenty of bats this season (14% swinging-strike rate) while keeping the contact rate low (72%) and keeping the walks in check. He lines up for a tougher matchup next week, against the Braves at home; Atlanta ranks 2nd in the majors this season in OPS (.808) against southpaws as a team, so it could be tough sledding for Rodon in that one.