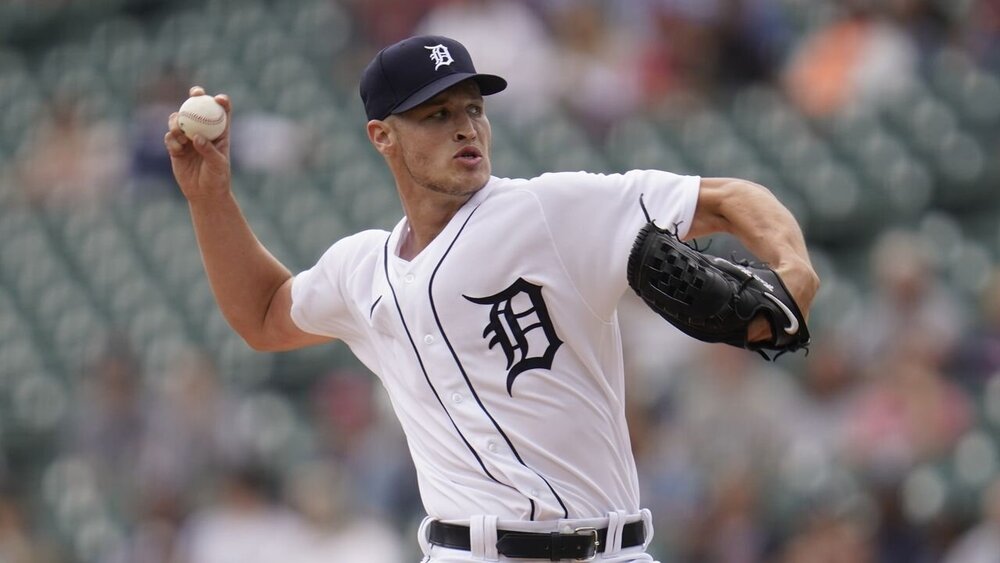 Matt Manning (SP-DET) put together a quality start as he earned the win against the Royals on Saturday, giving up 3 runs (2 earned) on 3 hits and a walk while striking out 4 over 6.1 innings. The 24 year-old righty fired 60 of his 94 offerings for strikes in the start while keeping the ball in the yard. Manning has made some strides this season, as he's posted a 3.86 ERA, 7.11 K/9, 2.6 BB/9, and 4.38 xFIP across 10 starts (44.1 IP); all of those figures compare favorably with what he did across 18 starts (85.1 IP) in his debut last season (5.80 ERA, 6 K/9, 3.5 BB/9, 5.13 xFIP). While the strikeout rate (as well as the swinging-strike rate of 10%, up from 7% in 2021) is still unexciting, he's made improvements across the board, including limiting hard contact to a 31% clip per Statcast (42% last season). Manning was a highly touted prospect entering last season, so it's not unreasonable to see him as an upside late-round pick in 2023 drafts. For now, he can probably be useful in a spot-start capacity down the stretch in 2022. He's currently slated for a turn in Chicago next week to face the White Sox, who rank #24 in the majors in team OPS against righties (.681).

Brady Singer (SP-KC) should make for a strong fantasy play on Sunday if he's available on your league's waiver wire. The 26 year-old has turned his career around this year, posting a 3.38 ERA. 1.17 WHIP, 8.8 K/9, and 2.1 BB/9 across 127.2 IP (20 starts, 3 relief appearances). The key to his success has simply been throwing more strikes, as he's slashed his walk rate considerably (was 3.7 last season) while opposing hitters are making more contact (79%) against him. His swinging-strike rate remains pedestrian at just over 9%, which curbs his strikeout potential, but there's no denying that Singer has vastly improved this season, as evidenced by a 3.37 xFIP that is nearly identical to his ERA. And on Sunday, he will face a Detroit team that ranks dead last in the majors in team OPS against righties (.598). So, start Singer if you can.

Josh Donaldson (3B-NYY) returned from the paternity list to go 2-4 with a solo homer and 3 runs scored against the Rays on Saturday. The 36 year-old has put together a disappointing season in which he owns a .223 average to go with 13 homers and 52 RBI across 462 plate appearances. His wRC+ of 101 is his by far his lowest since he got his first extended taste of big-league action back in 2012. Donaldson's 27% strikeout rate is his highest in a season in which he's logged more than 100 PA while his walk rate is his lowest since 2015 and his 43% hard-hit rate (per Statcast) is his lowest since 2018 and sits below his 48% clip in that department since 2015. He's swinging-and-missing more often than ever before (over 14%), chasing more often than usual (32% o-swing%), and making the least contact on pitches inside the zone since 2012 (76% z-contact%). It's difficult to look at all of the numbers and not simply say that time is catching up to Donaldson.

Joey Bart (C-SF) had a nice day at the dish against the Cubs on Saturday as he went 3-4 with a homer and 2 RBI. The 25 year-old backstop now owns a .233 average to go with 11 dingers, 23 RBI, 27 runs scored, and a pair of steals across 240 plate appearances, with an above-average wRC+ of 107. The strikeout has been a major problem for Bart this season, as his strikeout rate now stands at 37% after he didn't fan at all on Saturday. The good news is that after striking out at a terrible 44% during the first half of the season (140 PA), that figure has been a more palatable 28% (96 PA entering Saturday's contest) since the break. Otherwise, Bart has made hard contact at a healthy 44% clip (per Statcast) while ripping lots of liners (23%) and lofting a solid 35% flyballs. He could be a solid option at C next season should he continue to keep the strikeouts in check.

Elvis Andrus (SS-CHW) stayed hot as he went 2-5 with a walk and a 3-run homer. The 34 year-old has put together a solid season, as he now owns a .251 average to go with 13 dingers, 50 RBI, 55 runs scored, and 9 steals (in 13 attempts) across 480 PA, with an above-average wRC+ of 108. But he's been most productive since the All-Star break, amassing a .292 average with 6 homers, 22 RBI, 19 runs scored, and 4 steals across 162 PA (entering Saturday's contest), compared with a .225 average, 6 dingers, 25 RBI, and 34 runs scored over 312 PA. Acquired by the White Sox for infield depth, Andrus has played regularly with Tim Anderson on the shelf and has hit out of the leadoff spot lately. He's widely available in fantasy leagues, so consider adding him if you could use a spark.

This is just a small sample our daily analysis, join our member area for tools that will help you win your fantasy championship. Click here for details: http://www.insiderbaseball.com/baseballsample.htmClick here to register: http://www.fantistics.com/salesbaseball.php3