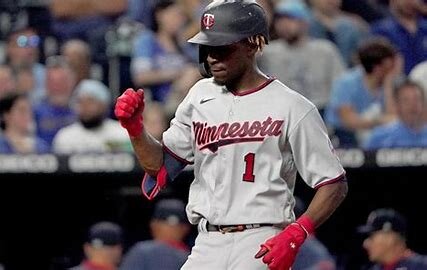 Nick Gordon (2B/SS/OF - MIN) - Gordon singled and homered on Monday, giving him 3 HR in his last 6 games. The 26 year old's progress toward a productive player has been much slower than expected, but he was hitting 292/345/481 in the second half coming into Monday's contest while sporting a walk rate nearly double that of the first half and a K rate 3% lower, and the exit velocity has been solidly above average in both of his MLB campaigns. I do feel like there's more power upside here, and if he can take that one more step to become a plus hitter for both contact and hitter with the decent speed that he offers (top 20 percentile in sprint speed, likely an 8-12 SB guy at least), he's going to have a place in the top-60 OF come 2023. I've currently got him around #55 on my OF list for next season as it is.

Edward Cabrera (SP - MIA) - Cabrera once again showed his upside and downside on Monday, walking 3 and allowing 3 runs over 5 innings, but striking out 4 and looking unhittable at times. The control is the last hurdle here for Cabrera: the GB rate and hard contact allowed are better this time around, he's missing plenty of bats, but the amount of walks both get him in trouble and don't allow him to pitch deep into games. He has huge upside and huge downside.....he's exactly the kind of guy I love to roster at the back of my rotation entering a new season. The high floor guys are always available and can replace some players that don't take a step forward, but the high upside guys are what you want.

Joey Meneses (1B/OF - WAS) - Meneses was 4-4 with a steal on Monday in the 5-2 loss to Atlanta, and he's now hitting 325/356/548 through 177 PAs. The EV has been well above average, the contact rate is just under 80%, and he's been very productive in the minors since 2017....he had just never gotten a chance because he was in fairly stacked organizations in Atlanta, Philly, and Boston. He's 30, so next year's bust potential is going to be high, but I see less risk here than most players of his ilk....he's been doing this for 3-4 years, just not at this level yet. His production this year has a smidge of fortunate BABIP to it, but the power is legitimate, and the contact rate is good enough that an AVG decline doesn't worry me much.

Jordan Diaz (1B? - OAK) - The A's called up one of their top-10 prospects Sunday, bringing up Jordan Diaz when Ramon Laureano was placed on the IL with a hamstring strain. Diaz is almost a man without a position, playing mostly 1B and DH with a bit of 3B and LF mixed in, but his hitting skills have really blossomed this year. He's hit 19 homers with close to a .330 AVG between AA and AAA this year in 120 games, and his contact ability is evident in the above average swinging strike rates that he posted at both spots. He has been steadily improving despite moving from low-A to high-A to AA to AAA, which is always a good sign for a prospect. I think he's probably only a deep league flyer for the last few weeks, as the A's are directionless with a packed roster, but he is certainly someone to keep an eye on during his cameo over the next few weeks.

Logan Gilbert (SP - SEA) - Since a couple of very rough starts against the Yankees in early August, Gilbert has returned to form, and Monday saw him at his absolute best: 6 IP, 4 H, 1 ER, 1 BB, 11 K in an easy win against the Angels. For the month he's thrown 23 IP and allowed 15 H and 2 ER with 5 BB and 34 K, and aside from the starts against New York he hasn't allowed more than 3 ER since before the All-Star break. There's plenty of reason for skepticism here, as other than his excellent walk rate the other indicators that we are primarily concerned with, swinging strike% and hard contact allowed, are average and poor respectively. An ERA around 4 would be more likely than one around 3 from the underlying data, so as much as I do think Gilbert has the potential to be a top-30 SP, I'm not willing to value him there just yet.