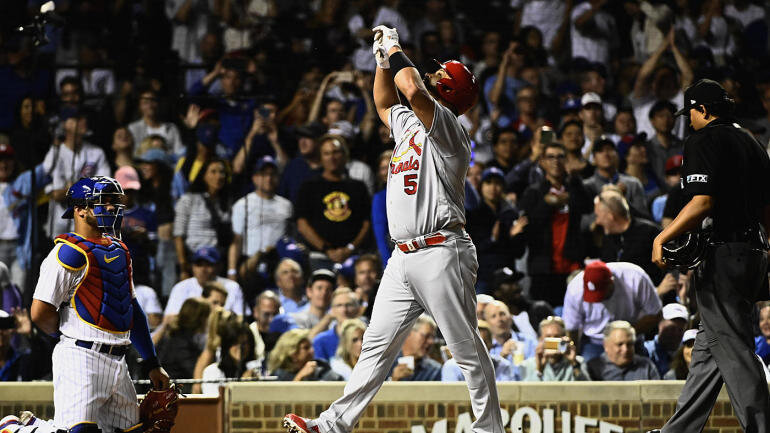 Albert Pujols continued his late-season tear on Sunday by going 2-for-2 with a double, a homer, two runs, and three RBIs against the Pirates. Pujols remains in vintage form as the regular season winds down, socking his 14th double and 23rd homer of the season. The bulk of that damage has come during the second half, as he has 19 homers, nine doubles, 46 RBIs, and a .318 batting average over his last 60 games dating back to July 10. It's been a truly remarkable turnaround for Pujols at age 42, who appeared to be limping towards the finish line of his Hall-of-Fame career during the first half. He's re-emerged as a fantasy force down the stretch, providing a massive boost to the Cardinals as well as fantasy managers who shrewdly picked him up. His hot finish has led many to speculate whether he will return for 2023, especially now that he's just 12 homers shy of tying Babe Ruth for third all-time. If he doesn't come back for another season, he's certainly going out on a high note with his best campaign in years.

Teoscar Hernandez powered the Blue Jays to a 6-3 win over the Red Sox on Sunday, going 3-for-4 with two home runs and three RBIs. Hernandez continued to feast on Boston pitching after pounding out four hits on Saturday, enjoying his second multi-homer game of the season and first since July 13. After a poor start to September, Hernandez has turned it around over the past two weeks, batting .375 with five homers, seven doubles, 11 RBIs, and 14 runs scored over his last 12 games. The monster finish has boosted Hernandez's average to .267 and his OPS to .811, which are right in line with his career marks of .261 and .816. His 25 homers and 77 RBIs are mildly disappointing compared to last year's 32 and 116, but an elevated ground-ball rate (53.4%) is likely to blame for that, especially since his .228 ISO is actually better than last year's .227 mark. More importantly for Toronto, the 29-year-old outfielder is entering the postseason on a tear and appears poised to provide more big hits for the Blue Jays in October.

Whit Merrifield went 3-for-4 with a double, a homer, two runs, and two RBIs against the Red Sox on Sunday. Merrifield continued to terrorize Red Sox pitching with his second three-hit game in three days, finishing a triple shy of the cycle and extending his hitting streak to six games. After a painfully slow start with Toronto following his trade from Kansas City at the deadline, the two-time All-Star has finally settled into a groove at the plate over the past couple of weeks. Merrifield has hit safely in nine of his last 10 games, launching four home runs and four doubles with nine RBIs during that span. The late power binge pushed him into double-digits for homers for the fifth straight full season (excluding 2020), although his .247 average and .670 OPS are both career-lows by far. It's probably just normal aging for the 33-year-old, although his recent heater suggests he still has something left in the tank. The big red flag for him is that he's hitting fewer line drives (22.5%) and more fly balls (29.1%) than ever before, which suggests he's getting under the ball too frequently and potentially upper-cutting more than usual. That's not his strength, so he'll need to focus on squaring up the ball and trying to go gap-to-gap rather than launching it over the fence in order to get back to what made him such a great player for the past five years.

Jeremy Pena went 3-for-4 with a homer and three RBIs against the Rays on Sunday, leading the Astros to a 3-1 victory. Pena knocked in all three of Houston's runs in this potential playoff preview, including the first two with his two-run shot in the bottom of the first. He later singled in an insurance run in the seventh, capping his first three-hit game since Sept. 12. The long ball was the 21st of the year for the 25-year-old rookie, who's finishing his first season strong with five long balls, 15 RBIs, 17 runs, and a .280 batting average over his last 21 games. It's an impressive turnaround following a brutal slump from late July to early September, showing how hot and cold rookies can be as they work through their growing pains. While he's been very streaky this year, Pena still has solid overall numbers with 21 dingers, 20 doubles, 11 steals, a .252 average, and a .709 OPS. His 22:132 BB/K ratio could definitely use some work, so if he improves his plate discipline he may become more consistent and post even better numbers going forward.

Jesse Winker finally broke out of his terrible slump on Sunday, going 1-for-3 with a three-run homer and a walk against the A's. His ninth-inning blast was far too little, too late for Seattle, merely avoiding the shutout in a 10-3 loss. The belated long ball was Winker's first since Aug. 17, snapping a 29-game homerless streak. Winker has been an absolute mess offensively this season, batting just .219 with a .688 OPS, 14 homers, and 53 RBIs despite playing a career-high 136 games. It was a major step back from his All-Star campaign in 2021 and strong 2020 as well, perhaps indicating that he was exposed as an everyday player. A .252 BABIP hasn't helped, but it's not surprising considering his career-worst 87.2 mph average exit velocity and 34.3% hard-hit rate. His fly-ball rate has also skyrocketed over the past two seasons from 19.2% to 28.8%, so perhaps he's gotten too fly-ball happy. His plate discipline numbers are still strong (84:103 BB/K ratio), so if he can level off his swing a bit and start hitting more line drives he should bounce back next year.