The first two weeks of the season were eerily similar to last year for the 26-year old Arizona State grad, but Davis has something to build off of after jacking two long balls off of Stephen Strasburg in the Mets 7-1 victory over Washington Friday night. The two-hit night bumped Davis' average to .173, but he did whiff in his other two ABs, so Davis will need to show he can consistently get hits before he should be slotted into any lineups right now. The fact that he seems to be a slow starter will keep him on fantasy rosters for the foreseeable future, but he will need a few more nights like this to gain owners trust.

The young Mets phenom continued his impressive streak, notching his fourth victory in as many starts this year, improving to 4-0. He struck out seven in as many innings while surrendering just four hits and walking three. The highlight of his outing came in his last inning of work when like a seasoned veteran, Harvey was able to work out of a bases loaded, no out jam. This held the Nats to one run in the frame and allowed the Mets to tack on insurance later on. The 24-year old now has given up just 10 hits in 29 innings along with three runs. His ERA sits at a 0.93 and he looks even more polished and poised than anyone could imagine him to be with just 14 major league starts under his belt.

In another dominant performance, the veteran right-hander recorded his second win of the year, blanking the Braves over seven innings of one-hit ball en rout to a 6-0 win. His ERA (0.56) makes Matt Harvey look like a mere mortal. Although Rodriguez has not posted an ERA above 3.79 since the 2007 season, it's hard to believe he'll continue pitching anywhere near this well, but when things are clicking, its hard to get a guy as even-keeled as Rodriguez off his game. He shouldn't be available in any leagues, but if he is, there is no reason why you shouldn't grab him right, about...........now.

Similar to Ike Davis, Alvarez is another power-hitting lefty who has struggled mightily in the opening month, batting just .115 and striking out in nearly 40% of his at-bats. He does have two dingers in his past two games, but considering how much he swings and misses, he isn't fantasy worthy in anything more than deep, NL Only leagues. He is a guy who will hit five or six homers in a week along with 15 RBI, so this small power trip could mean he is read to break out. Definitely someone to constantly have on your watch list as he can carry your team if he catches fire for a decent period of time.

Doc put together another solid performance in a rain-shortened game in Philly last night, holding the Cardinals to two runs in seven innings, improving his record to 2-2. This marks his second straight win after two very concerning starts to kick off the season. Walks were the biggest issue for 35-year old righty, but after issuing six walks in his first seven innings this year, Halladay has just three over his last 15 innings, which is much more like the Halladay from years past. Injuries are always going to be something lingering over Doc's head as he gets older, but he seems to have his mechanics back to normal and should be mowing hitters down like usual now.

"There are over 100 players covered each day in the member area, if you're not already a subscriber, join us today!" 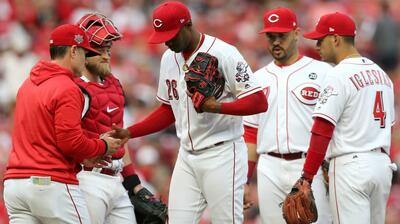