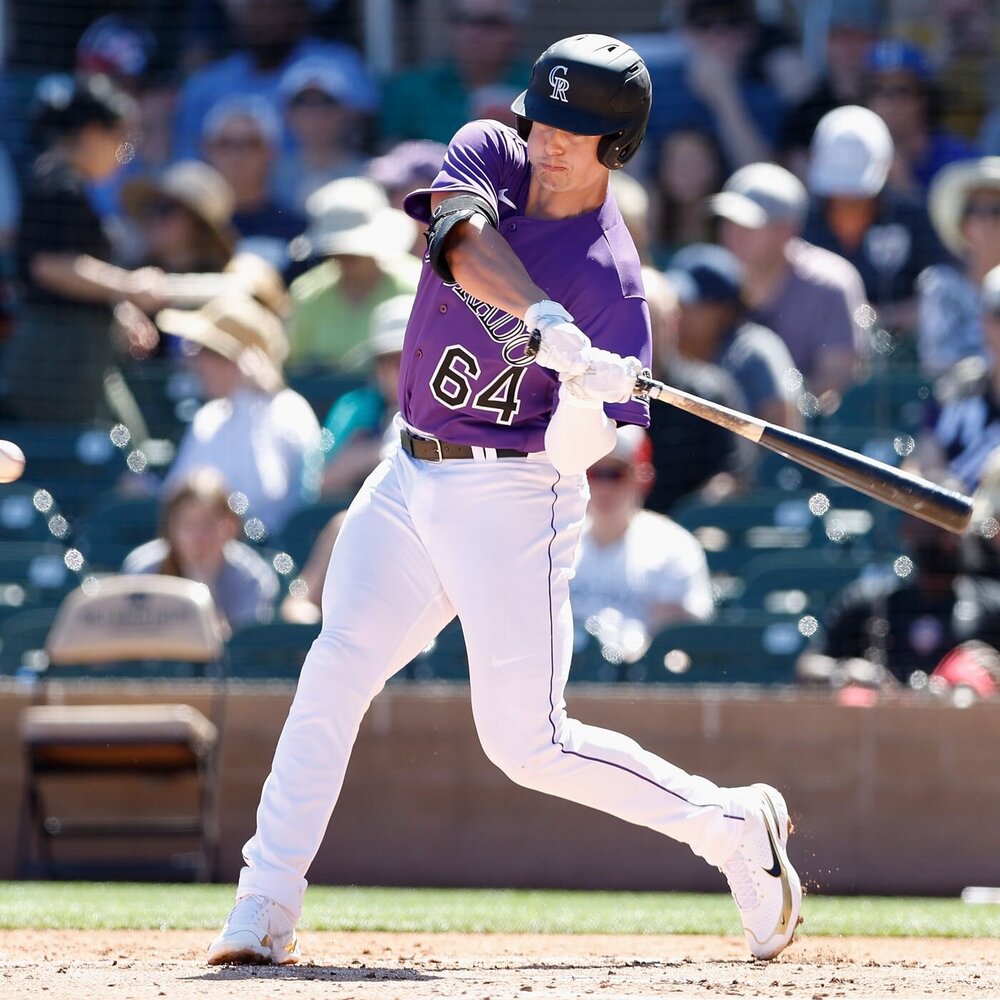 OF Yonathan Daza (shoulder) was activated on Tuesday and returned to the starting lineup batting second. The Rockies are mixing and matching in the outfield but are likely to play OF Charlie Blackmon, 1B/OF Michael Toglia, and OF Yonathan Daza with a sprinkling of OF Garrett Hampson, OF Sean Bouchard, and OF Connor Joe. DH Nelson Cruz (knee) returned to the lineup on Tuesday. The Nationals seem content playing Cruz despite his age and lack of production (.234/.316/.340) this year. Outside of NL-only leagues, it is hard to roster Cruz at this point in the season. SS Jose Iglesias was placed on the 10-day IL on Tuesday with a hand injury. SS Alan Trejo has served as the Rockies starting shortstop. Trejo hit .264 with 16 HR, 46 R, 52 RBI, and 2 SB in Triple-A this year. He has an aggressive approach at the plate (3% BB) that major league pitchers will likely take advantage of. OF Kris Bryant (foot) has increased his activity level but is still without a timetable for a return. From a fantasy perspective, it does not matter because he is not likely to make it back in time to make any real impact. C Jorge Alfaro (knee) was activated on Monday for the Padres. He is splitting time with C Austin Nola. Alfaro is hitting .252 with 7 HR, 25 R, 38 RBI, and 1 SB. The only issue for him is the lack of playing time that makes it hard to roster him outside of deep two-catcher mixed leagues. 2B Brandon Drury (head) was placed on the concussion IL on Monday and is targeting a Tuesday return. OF Wil Myers (neck) returned to the lineup on Tuesday after sitting Monday. OF Austin Slater was placed on the 10-day IL with a left-hand sprain. 2B Gavin Lux (back) was out of the Dodgers lineup all week after getting a cortisone shot in his back last weekend and isn't expected back until next week. Lux has been good in real life but has lacked fantasy production this year outside of batting average (.293 AVG with 6 Hr, 62 R, 42 RBI, and 7 SB). C Willson Contreras was placed on the 10-day IL on Wednesday with an ankle injury. This means that C Yan Gomes will start the majority of games for the Cubs and immediately becomes a pickup in two-catcher mixed leagues. OF Jorge Soler was cleared earlier in the week for full baseball activities. He is going to need a rehab assignment before returning. OF Nick Senzel was out of the lineup on Tuesday and Wednesday due to an ankle injury but returned on Thursday. He has stayed relatively healthy and has posted a .236 AVG with 4 HR, 42 R, 24 RBI, and 8 SB line which is not great but still flashes some of his upside. The plate skills are good (7% BB and 18% K) and the speed is there (8 SB) but the quality of contact has not been great (3% Barrel and 30% Hardhit). OF Starling Marte is dealing with a fractured finger and was going to attempt to play through the injury but was placed on the 10-day IL on Saturday. This is not good news for those who were planning on riding Marte down the stretch run. He has had a very good fantasy season (.292 AVG with 16 HR, 76 R, 63 RBI, and 18 SB) but has once again struggled to play a full complement of games (118 GP). 2B Kolten Wong (knee) left the game early on Tuesday with left knee discomfort and didn't return until Saturday. OF Dylan Carlson (thumb) was placed on the 10-day IL. The Cardinals are running out OF Corey Dickerson, OF Tyler O'Neill, and OF Lars Nootbar regularly in the outfield. OF Joey Gallo (elbow) left Wednesday's game early after being hit on the elbow with a pitch. He returned to the lineup on Thursday. OF Juan Soto is dealing with a shoulder bruise that saw him leave Wednesday's game. He returned on Friday to the starting lineup. 2B Nick Madrigal (groin) was out of the Cubs lineup on Saturday after leaving Friday's game early with a groin injury and was later placed on the 10-day IL. 2B Max Muncy is now dealing with a knee injury on top of his elbow injury. He was out of the lineup on Friday after getting a cortisone shot in his left knee on Wednesday. C Keibert Ruiz (groin) is likely going to be out for the season with his recent groin injury. The Nationals will more than likely split time between C Riley Adams and C Tres Barrera. Neither are fantasy relevant. OF Victor Robles (neck) has missed the last three games. He is considered day-to-day. OF Bryce Harper was back in the Phillies lineup on Saturday after getting a day off on Friday. 3B Patrick Wisdom (finger) was activated off the 10-day IL.

Tony Gonsolin (forearm) is expected to throw a bullpen on Sunday. His progress has moved slower than expected but isn't considered a setback. Justin Steele (back) was placed on the 15-day IL on Monday. The Cubs called up prospect Hayden Wesneski who had pitched well in Triple-A this year (3.51 ERA and 1.15 WHIP). He looked good in his first start (5 IP, 0 ER, 2 H, 1 BB and 8 K). His first start made him look like a strikeout pitcher but his Triple-A numbers don't back that up (22% K) so be cautious when bidding in FAAB. Zack Wheeler (forearm) played catch on Tuesday. The plan is to try to get him back before the end of the year because the Phillies are in the thick of a playoff hunt. Max Scherzer (lat) was placed on the 15-day IL on Wednesday. It isn't considered a serious injury but the Mets have long-term (deep playoff run) goals that are a priority over our fantasy teams. This looks like a minimum stay for Scherzer but still hurts fantasy owners with such little time left in the season. Braxton Garrett (oblique) started a rehab assignment on Wednesday. Hopefully, he will get back to a major league mound before the end of the year. He has pitched well this year (3.67 ERA and 1.21 WHIP through 68.2 IP). Steven Matz (knee) was able to start a rehab assignment on Tuesday. If everything goes well he should return before the end of the year but he hasn't been healthy or effective this year (5.70 ERA and 1.31 WHIP). MacKenzie Gore (elbow) threw 37 pitches in a simulated game on Tuesday. It would be nice to see him on a major league mound before the end of the year so that we can get a sense of what his stuff looks like for 2023 drafts. He had moments of looking very good this year and then faded down the stretch. He ended up with a 4.50 ERA and 1.47 WHIP with 23% K and 12% BB. Graham Ashcraft (bicep) threw a bullpen session on Tuesday and faced live hitters on Friday. Taijuan Walker is dealing with a blister issue that may prevent him from missing time. Jake Odorizzi (arm) threw a bullpen session on Wednesday and is lined up to start for the Braves on Sunday in Seattle. Eric Lauer left his start early on Wednesday due to left elbow tightness. He received "good news" on Thursday. Lauer had been in the midst of a strong fantasy season (3.91 ERA and 1.25 WHIP) considering where he was drafted. He was placed on the 15-day IL on Saturday. Hunter Greene (shoulder) will have a rehab start this Sunday with Triple-A Louisville. He is expected to rejoin the Reds rotation next week as he finishes off his rookie season. Huascar Ynoa (elbow) underwent Tommy John surgery on Wednesday and will miss the rest of this season and all of next year. Zach Eflin (knee) will start a rehab assignment on Friday in Triple-A Lehigh Valley. Alex Wood (shoulder) is improving but still does not have a return date. When he was placed on the IL it was thought to be a season-ending injury and despite the recent improvements that is still the prevailing thought. Freddy Peralta (shoulder) has been placed on the 15-day IL with shoulder fatigue.

Seranthony Dominguez (tricep) started a rehab assignment on Thursday and is expected to be activated on Sunday. He should go back into high-leverage situations that will include save chances but it is unlikely that he sees every save chance for the Phillies. David Bednar (back) was scheduled for live batting practice on Saturday. The next step is going to be a rehab assignment and it is looking likely that he will return before the end of the year. Dylan Floro picked up a save and a win this week.

1B/OF Michael Toglia (COL)- Michael Toglia has been called up by the Rockies and has become the everyday first baseman. Toglia is hitting .278 with 2 HR, 7 R, 7 RBi, and 0 SB in 10 GP. Throughout the minors, he has displayed above-average power but has struggled with strikeouts. If you need power and looking for upside, Toglia fits those characteristics with the caveat it could go south quickly due to his swing and miss issues.

C Yan Gomes (CHC)- Yan Gomes has become the Cubs primary catcher each time that Willson Contreras has had to hit the IL. On the year, Gomes is hitting .236 with 7 HR, 20 R, 22 RBI, and 1 SB. It isn't a sexy profile but one that has value in two-catcher mixed leagues.

3B Eduardo Escobar (NYM)- Eduardo Escobar is playing every day for the Mets and has been hot of late. He has hit .378 with 3 HR, 4 R, 6 RBI, and 0 SB since coming off the IL. As long as he is playing and playing well he needs on fantasy rosters.

SP Wade Miley (CHC)-Wade Miley has trouble staying healthy but needs to be rostered when he is healthy like he is now. He has a 3.58 ERA since the beginning of 2018 over 448.2 IP. He is successful having an average walk rate with above-average ground balls. The profile isn't amazing but definitely usable in deep mixed league formats.

OF Joey Meneses (WSH)- Joey Meneses is hitting .319 with 7 HR, 21 R, 18 RBI, and 0 SB. He continues to be under-owned considering how good he has been since becoming a regular. He is 30 years old which is a factor when considering his dynasty value but not for the rest of this year. He makes contact (22% K) and hits the ball hard (10% Barrels).

OF Lane Thomas (WSH)- Lane Thomas is leading off for the Nationals. The Nationals lineup may not be good but leading off is a nice value boost for anyone regardless of the lineup around them. Thomas is hitting .249 with 15 HR, 52 R, 47 RBI, and 6 SB. The batting average is great but the power/speed upside is worth it at this point in the year.