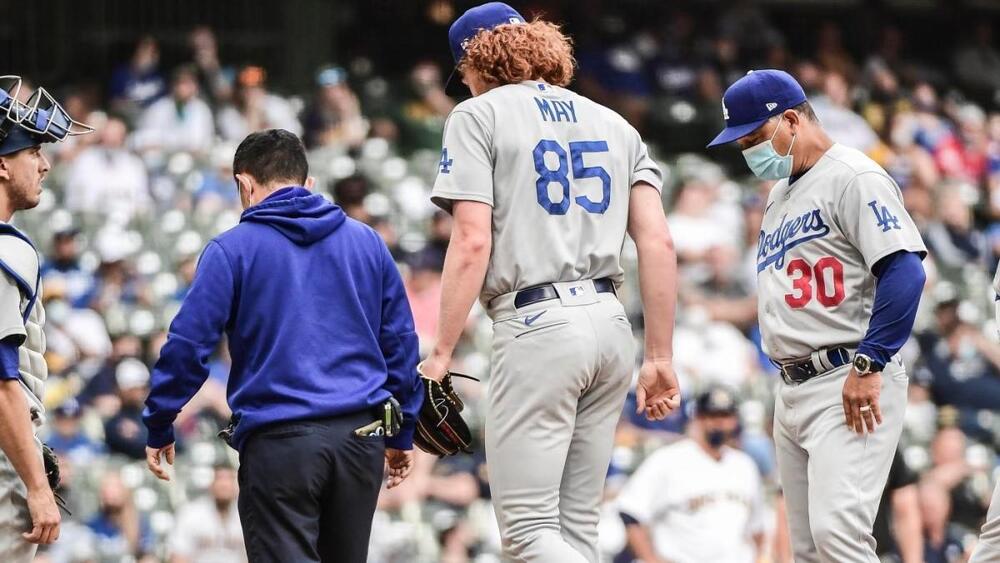 Dustin May (TJS) is going to make his final rehab appearance on Sunday and then will make his season debut next weekend against the Marlins. He has looked dominant in his rehab starts so if he is available he needs to be picked up ASAP. Chad Kuhl (hip) is slated to throw a simulated game on Friday which is a positive because he has been on the IL for less than a week. Clayton Kershaw (back) has begun light throwing. The hope is that the epidural shot will help alleviate the discomfort and he can up the intensity of his throwing. Max Fried (concussion) has been placed on the 7-day concussion IL. He started having symptoms after taking a fall in his latest start. He is eligible to return on Monday but that will all depend on how he recovers over the weekend. Wade Miley (shoulder) made his third rehab start on Wednesday and got up to 66 pitches. He is likely to make his next start at the major league level. Adrian Houser (elbow) made his second rehab start on Thursday. He was able to go three innings which means that he will need at least one more start before returning. The Brewers have been cautious in his rehab so it could be more than one start depending on how he responds to the increased pitch counts. Jack Flaherty (shoulder) threw 35 pitches (1 IP) in his rehab start on Wednesday. He is going to progressively up his pitch count with the goal of returning in September. For fantasy, it is going to be hard to count on much from Flaherty. He has tried to pitch multiple times this year and the shoulder has been an issue each time. Kyle Hendricks (shoulder) is going to rest another week from throwing. This pushes his timetable back and makes it difficult for him to make it back in time for any type of contribution. He has been bad once again this year (4.80 ERA and 1.29 WHIP). Hendricks being fantasy viable is quickly becoming a distant memory. Sixto Sanchez (shoulder) is scheduled to throw a simulated game (2 IP) on Saturday. The Marlins are hoping to get some work on a major league mound before the end of the year. He is not going to be fantasy relevant but seeing him healthy on a mound is going to be a huge driver of his draft day price in 2023. Max Meyer had Tommy John surgery on Tuesday which ends his season and will knock him out for all of 2023 as well from a fantasy perspective. Trevor Rogers (back) is going to make a rehab start on Sunday. If everything checks out after this start, he should make his way back to the Marlins rotation. Rogers is looking for some positives over the next month and a half heading into 2023 because this has been a lost year for him (5.85 ERA and 1.60 WHIP). The Braves called up Kyle Muller to start on Saturday (5 IP, 2 ER, 1 BB, and 5 K) and then optioned him to Triple-A in a procedural move. He is expected to be back up soon with Ian Anderson being sent back down after Saturday's start.

David Bednar (back) has begun to do strengthening exercises with his back hoping to start throwing next week. This means that Wil Crowe will continue to be fantasy relevant until Bednar comes back. Yerry De Los Santos was placed on the 60-day IL with a right lat strain on Friday. He had picked up a couple of saves earlier in the year when Bednar was out so the job is just Crowe's. Brusdar Graterol (shoulder) has started a rehab assignment this weekend. He should be back shortly which will be a boost for the Dodgers bullpen. Craig Kimbrel has a firm hold on the closer's job so his fantasy value will be very minimal.

2B Vaughn Grissom (ATL)-The Braves called up Vaughn Grissom on Wednesday straight from Double-A and he promptly hit a home run and stole a base in his major league debut. He will play second base with 2B Ozzie Albies and 2B Orlando Arcia on the IL. Grissom was hitting .363 with 3 HR, 10 R, 12 RBI, and 7 SB in 22 GP at Double-A after going .312 with 11 HR, 62 R, 55 RBI, and 20 SB in 74 GP at Single-A. He has been a quick riser this year but does have power/speed upside and has shown the ability to make contact at all levels. He is worth an add in all formats while he is up.

SS Paul DeJong (STL)- Paul DeJong is currently the Cardinals starting shortstop. He continues to struggle to hit for average (.188) but has 5 HR and 3 SB in 36 GP. He has also been much better in the second half (.300 AVG with 3 HR, 8 R, 13 RBI, and 0 SB). If you are looking for power and need an MI you could do worse than DeJong.

OF Lars Nootbar (STL)- Lars Nootbar has found an everyday role for the Cardinals. He is hititng .241 with 5 HR, 23 R, 21 RBI, and 3 SB in 59 GP. The quality of contact metrics look great (10% Barrels and 44% Hardhit) as well as his plate skills (13% BB and 22% K). There is risk once OF Juan Yepez comes back that he loses playing time but the skills are there and he has been playing great defense so he has earned this playing time.

RP Rowan Wick (CHC)-The Cubs closer role is firmly Wick's. He picked up three saves this week. The Cubs may not be a good ball club but having a closer's job all to yourself is extremely valuable this time of the year. Wick needs to be rostered in all formats.

RP Ian Kennedy (ARI)- The Diamondbacks removed Mark Melancon as closer. Ian Kennedy picked up a save on Monday and has been solid this year (3.13 ERA, 1.26 WHIP, 22% K, and 9% BB). It appears that they will use both Kennedy and Melancon in save chances which means that Kennedy has value to someone.

OF Franmil Reyes (CHC)- Franmil Reyes has started three of four games at DH since coming onboard from Cleveland. Reyes struggled mightily with the Guardians (.218 AVG with 9 HR, 24 R, 29 RBI, and 2 SB). He has been able to hit the ball hard (14% Barrels, 47% Hardhit, and 112.4 mph maxEV). The biggest difference is his HR/FB rate which sits at 15% HR/FB. His career rate is 27% HR/FB. The power numbers should return and hopefully, they will return in Chicago.