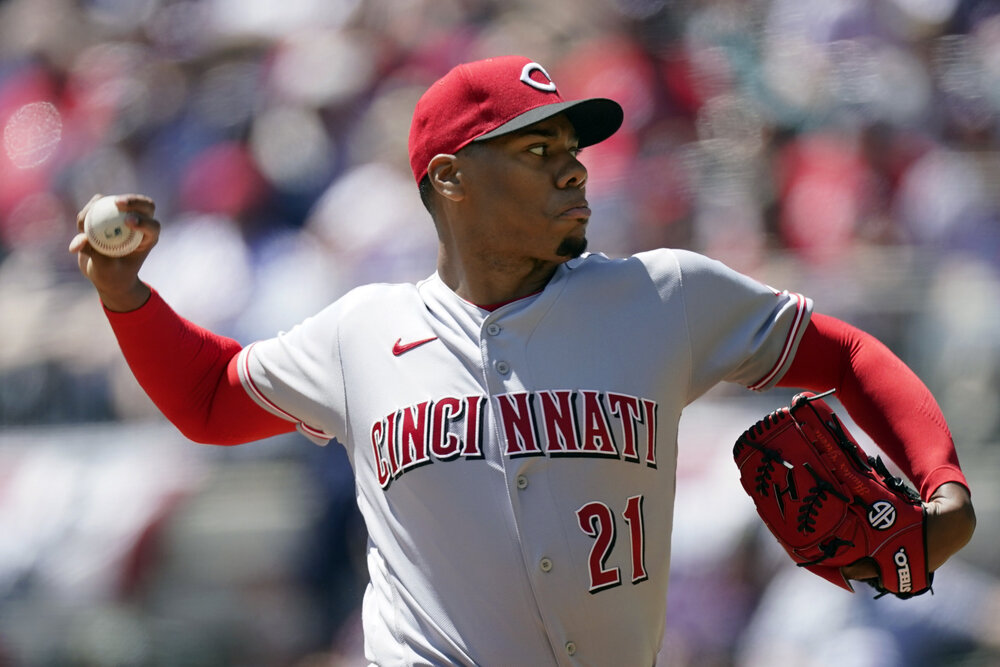 OF Ronald Acuna Jr. was scratched from the Braves lineup on Thursday due to mid-back tightness and has missed three straight games. Acuna has not been playing at 100% this season which is reflected in his overall line (.270 AVG with 13 HR/28 SB). The speed has been there but the power has not been and that is mostly due to fewer fly balls (34% FB) and not quality of contact (13% Barrels and 51% Hardhit). OF Brandon Nimmo (quad) had an MRI on Thursday that came back clean. He is considered day-to-day. 3B Joey Wendle was placed on the 10-day IL because of a hamstring injury. There was no indication if he would return this season which makes it hard to keep him on a roster. Jordan Groshans and Charles Leblanc are going to play in his absence. OF Seiya Suzuki (personal) is going to miss the weekend series with the Pirates. SS Nico Hoerner (tricep) has missed ten straight games and the Cubs would have been wiser to put him on the 10-day IL. He is day-to-day. OF Brandon Marsh was not in the Phillies lineup on Thursday due to a knee injury. He was back in the lineup on Friday. 3B Spencer Steer is dealing with an eye infection and missed Wednesday and Thursday before returning on Friday. SS Brendan Rodgers was placed on the 10-day IL with a hamstring issue. The Rockies called up SS Ezequiel Tovar. He is someone that has a very fantasy-friendly profile. He hit .318 with 13 HR, 39 R, 47 RBI, and 17 SB in 66 GP at Double-A. It is uncommon to have someone with five-category potential come available this late in the season. The downside is that he is a rookie and it is not uncommon to struggle in their first big league experience. Tovar's upside is worth taking a shot though. 1B C.J. Cron sat out the Rockies games on Thursday and Friday with a hand contusion after getting hit by a pitch on Wednesday. X-rays came back negative. 1B/OF LaMonte Wade Jr. exited Wednesday's game early with hamstring tightness but was back in the lineup on Thursday. OF Brandon Nimmo (quad) left Wednesday's game early with quad tightness and his MRI came back clean. He has stayed healthy this year while leading off for the Mets but hasn't been great for fantasy. Outside of runs scored, he hasn't been above-average in any category (.264 AVG, 14 HR, 93 R, 56 RBI, and 3 SB). OF Nick Senzel has been placed on the 10-day IL with a fractured foot and is out for the year. It has gotten to the point that it is time to drop the prospect pedigree and hype from Senzel. He is not the player that many expected. Senzel has struggled to stay on the field and has struggled to be productive. Over his career, he is hitting .240 with 20 HR and 26 SB. However, outside of the rabbit ball season (2019) he has just 8 HR and 12 SB in 169 GP. His quality of contact metrics are not good either (5% Barrels and 35% Hardhit). His dynasty and 2023 value have taken a massive hit this year. OF Starling Marte is aiming for a September 30th return. This is not what fantasy managers wanted to hear but does give some guidance for keeping on or off your roster. 3B/OF Kris Bryant (foot) is still rehabbing and has no timetable for a return. It would be a surprise to see him again this year. OF Nick Castellanos (oblique) was able to run the bases on Tuesday and hit off a high-velocity pitching machine on Friday. He doesn't want to go on a rehab assignment so that he can return sooner but that would be against the wishes of his manager Rob Thomson. He is expected to be back for the Cubs series next week. Castellanos has had a down year (.265 AVG with 13 HR, 53 R, 61 RBI, and 7 SB). He has struck out more (23% K) and hit fewer barrels (7% Barrels). Castellanos's 44% O-swing is a career-high which would support the theory of him pressing in his first year of a big contract. OF Jake McCarthy was placed on the bereavement list on Friday and he is going to miss the weekend series with the Giants. McCarthy has been one of the most valuable fantasy players in the second half. On the year, he is hitting .288 AVG with 8 HR, 49 R, 41 RBI, and 19 SB. 2B Donovan Solano was out of the Reds lineup on Friday with an eye infection. C Willson Contreras (ankle) resumed baseball activities on Friday but is still without a timetable for his return. 3B Ke'Bryan Hayes was out of the Pirates lineup with lower back discomfort. He has struggled to stay healthy in his short time in the majors. This year he hit .243 with 7 HR, 52 R, 40 RBI, and 18 SB. The core skills (9% BB, 22% K, and 47% Hardhit) are there for a breakout. OF Luis Gonzalez was placed on the 10-day IL with a low back strain.

Tony Gonsolin (forearm) faced live hitters on Thursday. According to manager Dave Roberts his stuff looked good. He is scheduled to throw another bullpen before facing live hitters again. There isn't much time left for him to make an impact this season. Freddy Peralta (shoulder)is going to start for the Brewers on Sunday. He has been out since September 8th so if he does return it is likely going to be on a pitch count. Trevor Rogers was placed on the 15-day IL with a lat strain. This is going to end his 2022 season which was largely a disappointment (5.47 ERA and 1.50 WHIP). Mike Soroka (elbow) was placed on the minor league IL which is going to end his 2022 season. He has not pitched in the majors since the start of 2020 (3 GP). Ryne Nelson was placed on the 15-day IL with right scapula inflammation. It is unlikely that he makes another start for the Diamondbacks this year. He showed potential in his three-start sample (1.47 ERA and 0.82 with 15% K:BB). Drew Smyly (shoulder) had his start pushed back earlier in the week and it is tentatively scheduled to start Tuesday and Wednesday of next week. Smyly has been good when on the mound this year. He has a 3.48 ERA and 1.19 WHIP with 15% K:BB. MacKenzie Gore (elbow) made another rehab start on Wednesday (2.2 IP). It remains to be seen what the plan is from here but he could make at least one more start at the big league level which could give us a better indication of his health especially as we start to think about 2023. Eric Lauer (elbow) made a start for the Brewers on Friday (2.2 IP, 2 ER, 3 BB, and 3 K). Lauer has been good this year (3.91 ERA and 9% BB with 14% K:BB) so it was good to see him miss just a little over two weeks with an elbow injury. Spencer Strider was thought to have been dealing with a sore right oblique but it turned out to be worse than soreness. He has been placed on the 15-day IL. This is terrible news for fantasy managers because the Braves will want to be cautious with him this close to the playoffs. Strider finishes the year with an absolute dominating profile (2.67 ERA and 0.99 WHIP with 202 K's in 131.2 IP). Graham Ashcraft (biceps) is expected to return from the 15-day IL on Saturday. Ashcraft has a 3.97 ERA and 1.33 WHIP through 16 GS. Aaron Ashby (shoulder) returned from the 15-day IL on Tuesday and went two scoreless innings against the Mets. Keegan Thompson (back) was activated off the 15-day IL but is going to be used as a reliever. Patrick Corbin (back) was able to play catch from 90 ft. on Friday and is looking like he can avoid the IL. Mike Minor (shoulder) was placed on the 15-day IL. He is likely done for the season and is likely going to find it hard to get a job next year as a starter. Wade Miley left his start early on Saturday. Dustin May is dealing with back soreness and is expected to go on the 15-day IL which will end his already shortened 2022 season.

Brandon Hughes rolled his ankle on Thursday night and had to leave the game early against the Pirates. He is considered day-to-day. Rowan Wick and Mark Leiter Jr. would likely split save chances if Hughes were to miss extended time. Blake Treinen (shoulder) is going to be shut down and re-evaluated on Saturday. Jordan Hicks (neck) not throwing and resting due to a neck injury and fatigue. The Dodgers have removed Craig Kimbrel as the Dodgers closer. Unfortunately, there is no indication of who the Dodgers will use. The candidates include Evan Phillips, Alex Vesia, Brusdar Graterol, and Chris Martin. Sixto Sanchez (shoulder) is throwing from 60 ft. but isn't going to get any game action this year. It is tough to put any faith in Sanchez being healthy and/or having the same stuff prior to having surgery.

SP Hunter Greene (CIN)- Hunter Greene has been up and down this year. However, he has been excellent in the second half (1.54 ERA and 0.86 WHIP with 32% K:BB). It is a small sample (23.1 IP) but he has looked like the pitcher that we expected coming into the year. His arrow is pointing up for the rest of this year and heading into 2023.

SP Luis Ortiz (PIT)- Luis Ortiz has made two starts at the major league level (0.84 ERA and 0.84 WHIP). His ERA at Double-A this year (4.64 ERA) would normally warrant concern but the rest of his skills looked good. He had a 1.17 WHIP with 20% K:BB but was hurt by the long ball (1.50 HR/9). Ortiz has plus stuff and has a bright future pitching in Pittsburgh. The concern this year is that he ends the year on the road against the Cardinals but he is someone to buy in dynasty/keeper leagues.

SP Hayden Wesneski (CHC)-Hayden Wesneski has been excellent in his short stint in the majors. He has a 2.45 ERA and 0.82 WHIP through 22 IP. He has been able to miss bats (29% K) with good control (5% BB). He has been fortunate on balls in play (.208 BABIP and 87% LOB). His next two starts are at home against the Phillies and on the road against the Reds. They are not the best matchups but he has shown enough potential to be worth taking a shot at.

SP Drey Jameson (ARI)-Drey Jameson has looked good in his first two starts. He has a 1.38 ERA and 0.85 WHIP with 20% K:BB. The strikeouts (25% K) are probably not real based on his 10% SwStr but if he pairs it with an above-average ground ball rate (60% GB) and good control (4% BB) he could make it work. He starts Sunday against the Giants at home and then gets them on the road for his final start in 2022.

SS Ezequiel Tovar (COL)- Ezequiel Tovar has a fantasy-friendly profile. He hit .318 with 13 HR, 39 R, 47 RBI, and 17 SB in 66 GP at Double-A. It is uncommon to have someone with five-category potential come available this late in the season. The downside is that he is a rookie and it is not uncommon to struggle in their first big league experience. Tovar's upside is worth taking a shot though.

SP Wade Miley (CHC)- *Miley left his start early on Saturday* Wade Miley's final start will come at home against the Reds which is a good matchup for the left-hander. He has a 3.48 ERA and 1.32 WHIP in 7 GS this year. He doesn't miss many bats (19% K) but he has average control and above-average ground balls (54% GB). Outside of four games pitched in 2020, Miley has been an above-average starter since 2018. It's not a super exciting profile but at this point in the year, he has a solid streaming matchup if you need it.

Tweets by Fantistics
Is Mike Trout still playing at an MVP level? - September 26, 2022
Is Marcell Ozuna officially washed up? - September 27, 2022