Noah Syndergaard (NYM) - Noah Syndergaard didn't have his best stuff on Friday night and he left the game trailing by 2 runs to the Padres after throwing 6 innings while allowing 2 earned runs and just 5 strikeouts. I mentioned this on the XM show a couple weekends ago, but I believe that by season's end, Noah Syndergaard will be on a tier by himself immediately following Clayton Kershaw. Thor was obviously extremely impressive last season as a rookie, and expectations were high entering this year, but the development of his deadly slider has propelled him up the starting pitching rankings. His slider is so good, he's inducing whiffs 36% of the time when he throws that pitch. On top of that, when batters do make contact, they're hitting the pitch on the ground 64% of the time. This lethal combination is largely contributing to his overall 34% strikeout rate and mind-boggling 16% swinging strike rate, both of which are unheard of from starting pitchers. If he can maintain this consistency all season, he might just force himself into a tier with Kershaw. The price might be high for him now, but I almost guarantee you his prices isn't anywhere near where Kershaw's price is currently sitting. If you buy him now (especially after this "disappointing" start against San Diego), you might actually not be buying high since his overall perceived value is still lower than where I believe his projection is going.

Zack Greinke (AZ) - It was now or never for Zack Greinke on Friday night. He saw a favorable park shift from Chase Field to Turner Field and he was facing a Braves lineup that ranked dead last in the MLB in wRC+ at 65. As a baseline, the league average wRC+ should be around 100, so Atlanta's mark of 65 was sitting somewhere between poor and awful. Greinke did deliver a quality outing by going 6 innings and allowing just 2 earned runs on 7 hits and 1 walk while piling up 8 strikeouts. While I know he won't be as good as last season, I do have some optimism for Greinke moving forward. His strikeout rate of 19% is artificially low considering he has seen a big 4% jump in chase rate and has seen a pretty consistent swinging strike rate at 11%. He's also getting ahead in counts at a percentage well above his career levels and above the league average rate. Once those strikeouts bounceback, we'll also see improvement to his 66.7% strand rate. The walk rate remains solid, so the biggest factor weighing him down is the unfavorable ballpark shift. The home run concerns are real, but I do think there's a buying opportunity here.

Anthony Rendon (WAS) - Anthony Rendon smacked a homerun off John Lackey in the first inning of Friday afternoon's game, giving Rendon just his 2nd of the season and the week. Rendon is off to a very disappointing start to the 2016 campaign, but there's definite optimism in a bounceback coming for him. Despite hitting improvements to his batting EYE (.58 right now vs .51 last season), Rendon has seen his batting average drop all the way down below .230 with his BABIP sitting at a paltry .255. As a career .309 BABIP hitter, we need to understand the reason for this dip. The best place to look is the quality of contact statistics. Rendon has historically hit the ball very hard, with a career average hard hit rate of 36.3% and a soft hit rate of 15.8%, which supports his career BABIP north of .300. With such a sudden drop in BABIP, we would need to see a similar dropoff in quality of contact to consider this drop-off as "real", otherwise we can truly chalk up the decrease as simply bad luck. What we see however, is a hard hit rate and a soft hit rate that are each about 2% higher than average. With this data in hand, it gives me confidence that Rendon has truly been a victim of bad luck. After Friday's home run, it looks like we're already seeing his fortunes turn around and there's no reason to expect him not to continue trending upward.

Alex Presley (MIL) - Looking towards Saturday's slate, one player who might get overlooked is the left-handed outfielder for the Brewers, Alex Presley. While Presley did hit a homerun on Friday night, he's facing the left-handed Brandon Finnegan and DFS players tend to avoid lefty vs lefty matchups like the plague. In this case, however, it might make sense to have a little exposure to Presley as a nice value option in tournaments. Finnegan has struggled mightily against left-handed batters in his short major league career, allowing a .335 wOBA and 4.72 xFIP. Meanwhile, Presley has pretty even-splits. He's extremely cheap across he industry and would be a great option to save salary space to pay up for Chris Sale (the clear top option) on the main slate today.

Justin Bour (MIA) - Another guy who can help save you some salary on Saturday is Justin Bour. Jeremy Hellickson is one of the pitchers that's prone to the longball, and consequently, is pretty prone to blowups. Despite the somewhat unfavorable hitting environment, Hellickson is a heavy fly-ball pitcher who throws his fastball and curveball a combined 75-80% per game. Justin Bour is a pretty good fastball hitter, but a very good curveball hitter. At a reduced cost, Bour matches up nicely against Hellickson. It is worth noting that Bour was out of the lineup again on Friday night against the Phillies with a finger injury after he dislocated it earlier in the week, but reports have been positive and have pointed towards a return to the lineup this weekend. 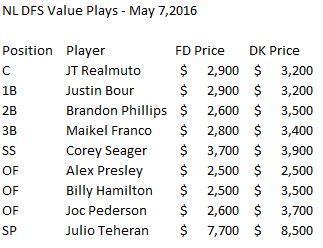