Carlos Rodon (CWS) - Carlos Rodon was tasked with trying to shut down a very hot Tigers offense (6th in wRC+ over last 14 days).  Unfortunately, the Tigers got the best of him, tagging him with 4 earned runs over 6 innings while allowing 7 hits and 3 walks. He added 5 strikesouts. Rodon has pitched pretty similarly to what he did in his rookie season in 2015, but there are a few indicators that suggest there's some definite upside from his current performance level.  Rodon continues to be a heavy groundball pitcher, inducing ground balls just under half the time, while also striking out batters about 21% of the time.  Those numbers are solid, and probably enough to keep him rostered on your fantasy team, but his ERA exceeding 4.00 is probably the biggest thing weighing your teams down up until this point.  With that said, it seems like Rodon has been hit with a bit of bad luck, allowing 8 homeruns through his first 11 starts (before Friday's game).  Looking at the data behind this total, we know that his HR/FB rate is sitting at a bloated 15.1% compared with 9.8% last year.  Based on quality of contact, hitters are only getting a hard hit rate of about 26% against Rodon this year, a mark that's amount 2% lower than league average and his mark in 2015.  With this in mind, it seems like the HR/FB rate is a little artificially high, which is supported by data from ESPN's Hit Tracker that shows us 6 of Rodon's 8 homeruns allowed have been "just enough" to clear the fence.  Even looking at the Statcast data from Friday, Victor Martinez's homerun traveled just 368 feet and left the bat at a speed of 97 MPH. As his luck levels out, some of those homeruns will turn into flyouts and his ERA will normalize with his xFIP below 4.00.  While I don't see the raw ability from Rodon to call him a future ace, I do think he will be a serviceable starting pitching for your fantasy teams moving forward.

Chris Davis (BAL) - Chris Davis hit his eleventh homerun of the season on Friday night, but unlike teammate Mark Trumbo, Davis hasn't been able to get things going offensively this season. Thanks to a career high high 15% walk rate, Davis has been able to maintain a decent .341 OBP, but his .218 batting average and .440 slugging percentage aren't what people were buying when they drafted Davis in the 2nd round this spring. Let me remind you, however, that Davis hit .196/.300/.404 in 2014, the season after he hit his career high 53 bombs. Davis has been on a "on one year, off the other" year pattern for the last several seasons. For Davis, his Hard Hit rate has fallen back closer to the 2014 levels than to his 2013 or 2015 levels and with it we have seen his HR/FB rate fall from 29% last year to 17% this year. Interestingly, even in 2014, that rate was still a respectable 23% (not that 17% isn't). I do think there are some areas of improvement in that department in the coming months for Davis and maybe his homerun last night (first since May 20th) will jump start him.

Danny Salazar (CLE) - Danny Salazar pitched a gem for the Indians on Friday night, throwing 8 innings of 1-run, 3-hit baseball while striking out 9. The outing wasn't without some excitement as the right-hander did manage to walk 5 Royals. Regardless, it's quite an achievement to strikeout 9 batters against a team that ranks 8th in the league in strikeout rate. The issues with the walks is one that we really haven't see from Salazar before in his career. He's definitely throwing in the strikezone a little less, but I think it actually has more to do with a first strike % that's currently 6% lower than his career average. With a strand rate at 84% right now (it was 100% last night), he's definitely going to need to cut down on the walks before the regression monster comes around.

Jurickson Profar (TEX) - Leading off for the last time before Rougned Odor is eligible to return, Jurickson Profar made the most of his lineup spot by hitting his 2nd homerun of the week. Profar went 2-for-5 with 2 runs scored and an RBI. Despite getting at least one hit in each of the games he has played and racking up 9 runs scored, the overall newsflow suggests that Profar will be sent back down once Odor is activated. We'll see if that actually happens, but as it stands right now, the Rangers would be sending their hottest hitter to the minor leagues. While it's been a long time coming and 3 years since we last saw him in the major leagues (he's still only 23), Profar flashed a glimpse of what the former top prospect could be if he was given regular at-bats. Profar spent most of the last two seasons dealing with a shoulder injury, so there's some definite question marks surrounding his durability, but he certainly looks primed and ready to contribute at the big league level.

Mark Trumbo (BAL) - Mark Trumbo had another big night at the plate on Friday, getting 3 more hits and scoring a couple runs. Trumbo has been on an absolute tear during the first third of the season and is now slashing .297/.350/.593 on the year. He also currently has 17 homeruns to go along with 42 RBI. Unfortunately, his 27% strikeout rate paired with his below average 70% contact rate will likely push his batting average down as the season wears on, and his 27% HR/FB rate is likely unsustainable given his modest 4% just in his hard hit rate. Trumbo won't fall off the face off the earth, but he's definitely a sell high candidate in most leagues. 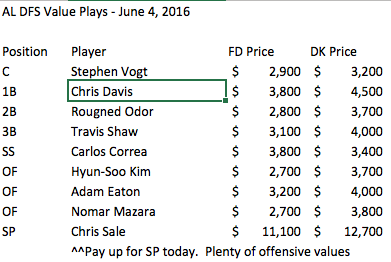