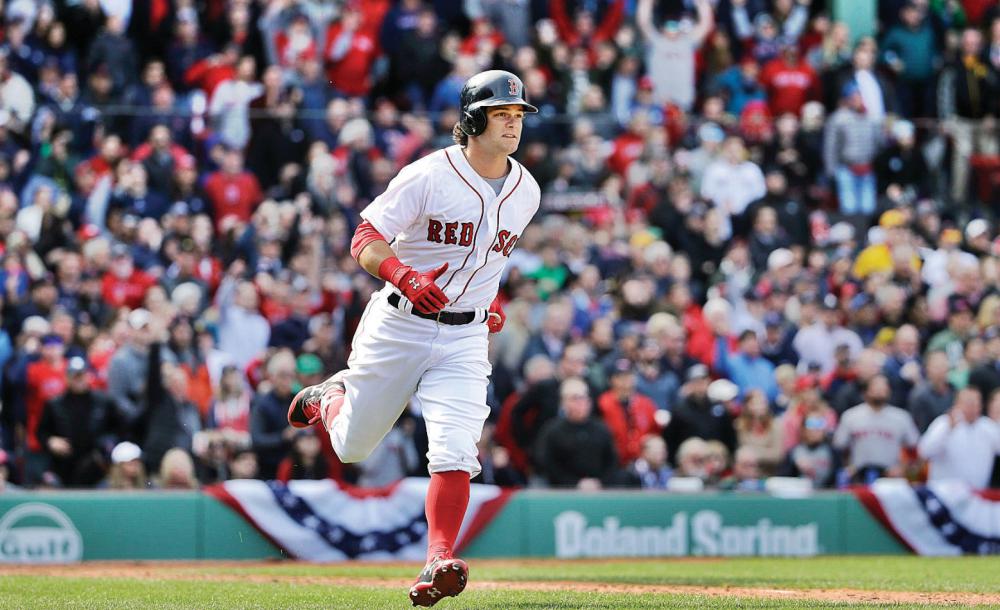 Evan Longoria (TB) - Evan Longoria hit the first home run of the 2017 season with a shot that just cleared the short left field wall in Tropicana Field. The path of the home run eearily resembled the home run he hit against this same Yankees team in the 2011 wild card game. Longoria has historically been a much better hitter versus left-handed pitching than right-handed pitching, but for the first time in his career, that split completely reversed in 2016 when he finished with a .308 wOBA vs LHP and .362 wOBA vs RHP. On top of that, 32 of his 36 home runs came against right-handed pitching, despite recent career trends that had him hitting about a third of his homers against southpaws. So what changed? For one, he stopped pulling the ball against left-handed pitching. Less pull usually leads to fewer homeruns, but doesn't necessarily explain the drop in batting average. However, Longoria did enjoy a big jump in hard hit percentage from 2015 to 2016 and when paired with a 6% increase in his flyball percentage against right-handers, it helps explain some of his power surge from the right side. If he can get back to the strong performance against left-handed pitching that he enjoyed for most of his career prior to last year, Longoria could put together sneaky strong numbers this year.

Roberto Osuna (TOR) - Ah, the closer carousel begins. Toronto closer Roberto Osuna was placed on the 10-day disabled list on Sunday with cervical spasms. There's very little information that has been released about the nature of this injury, but we do know Osuna's velocity had been a little low this spring. In his absence, Jason Grilli is expected to be the primary closer, but Jon Morosi reported yesterday afternoon that Joe Biagini could also see some save chances. If you're deciding how much FAAB to allocate for a bid, I wouldn't go over 5% of your total yearly budget until we get more confirmation on how serious Osuna's injury actually will be.

Melvin Upton Jr (FA) - The Blue Jays released outfielder Melvin Upton Jr on Sunday afternoon and already, multiple teams were already rumored to have interest in signing him. The Tigers seem to be a natural fit since they're currently dealing with JD Martinez's absence and Melvin's brother, Justin, also plays for Detroit. Upton continues to be plagued by a poor batting EYE (.24) and even worse contact percentage (68%), but he still possesses the tools to be a 20 HR and 20 SB offensive player, if given the playing time. Even with more playing time, however, his HR/FB rate from 2016 is almost certainly going to decrease from 17% since it was propped up by a mere 30% hard hit rate and 34% pull%.

Andrew Benintendi (BOS) - One of the most exciting young players in the game, Andrew Benintendi seems to be mispriced on FanDuel for Opening Day. At just $2,900, the left-handed outfielder has a decent chance at hitting second in the batting order for the Red Sox, a place where he could theoretically exploit Gerrit Cole's severe righty/lefty splits in at least 3 at-bats. Cole allowed left-handed opponents to slash .321/.381/.488 against him last season.

Miguel Sano (MIN) - While he's difficult to trust in cash games due to his poor contact rate, Miguel Sano is absolutely in play in GPP formats tomorrow as he takes on the homerun-prone Danny Duffy. Priced below the average roster spot at $2,700, Sano has displayed tremendous hard hit ability (41% career hard hit %) whenever he does make contact. Pair that with his heavy 46% flyball rate and you're dealing with a player than that hit the ball out of any park, at any time. Duffy's 13% HR/FB rate and heavy flyball tendencies match up well for Sano despite the unfavorable ballpark factors.