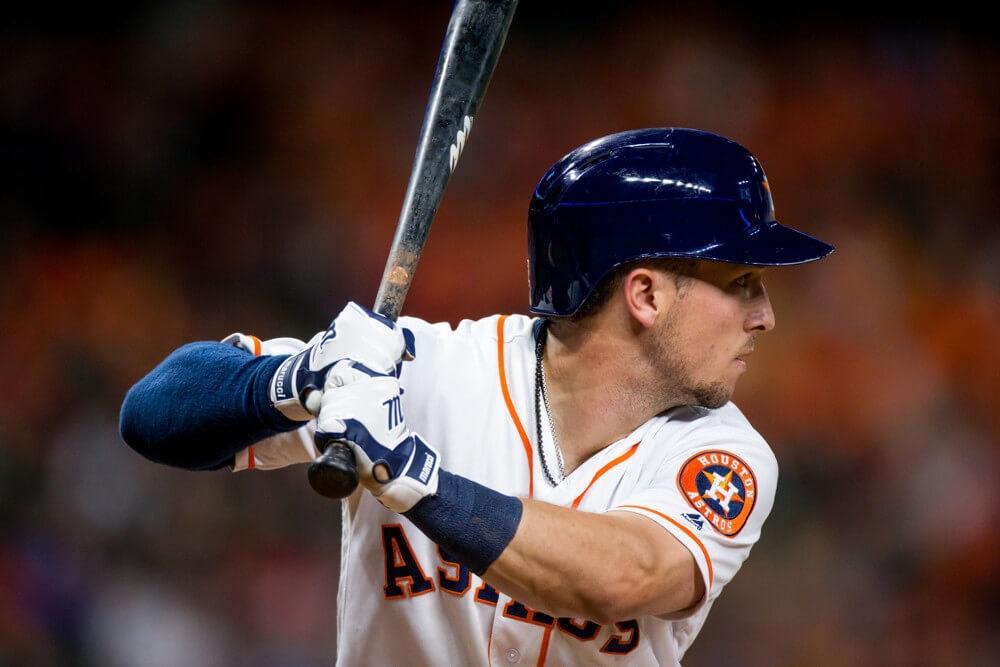 Alex Bregman (3B-HOU) Bregman hit his 16th home run of the season Saturday, a 2-run shot in the 6th. Bregman has been tearing the cover off of the ball over the past 15 days entering the day hitting .345 with a 1.237 OPS with 7 home runs, 18 RBIs and 13 runs scored, with Saturdays effort only adding to the power numbers. With other more established superstars on the Houston roster Bregman may be a name fans are not as familiar with - but they should be. Bregman has been smoking the ball in 2018 with 83.3% of his hits being of the medium or hard-hit variety. Bregman has also been an extra base machine, smashing 27 doubles, 1 triple and 16 home runs already at the halfway point of the season. Most impressively however id Bregman has actually taken more walks (48) then strikeouts (47) so far this season. Is it rare enough to see a player with this ratio and even more so when considering his power numbers.

Rafael Devers (3B-BOS) Devers had a career day going 5-5 with a double, home run, 2 runs scored and 4 RBIs. The former top prospect has struggled this season, entering the day with a 85 Wrc+ and a 23.8% K rate so the pristine day at the plate is a welcome sight to fantasy owners. Devers has had a very inconsistent sophomore season - Saturday marked his 3rd 3+ hit game in the past 10 games, but also has 5 hitless games in that span as well. The strong game improved his slashline to .248/.292/.445 - but his 20:84 BB:K ratio leaves a lot to desired for his approach at the plate.

Justin Verlander (SP-HOU) Verlander had arguably his worst start of the season Saturday taking the loss allowing 5 runs on 9 hits over 5 innings while striking out 8. It was the second rough outing in a row for the Houston Ace who got beat up for 4 earned runs over 6 and 2/3 innings his last time out. Verlander should be looking forward to the calendar flipping to July as he had a rough June going 2-2 with a 3.62 ERA - comparatively an awful number considering he entered June with a 1.11 ERA. Overall the "struggles" could be attributed to the 6 home runs he allowed but overall, he is sitting on a Cy Young-Caliber season with a 9-4 record, 2.12 ERA, 0.86 WHIP and 144 strikeouts over 118 and 2/3 innings. Verlander will make his first start in July Friday the 6th vs the White Sox.

Trevor Hildenberger (RP-MIN) Hildenberger was rocked Saturday allowing 5 earned runs on 5 hits and 4 walks, registering just 1 out Saturday. It was a disastrous outing that raised his ERA from 2.06 to 3.18 as his struggled with control all night throwing just 12 of 24 pitches for strikes and allowed the first 6 batters he faced to reach base before he recorded an out. To be fair 2 of the 4 walks were intentional to set up double plays, but overall Hildenberger's numbers suggest the 2.06 ERA he entered with may be a little too good to be true - he has a 3.83 FIP, a meager 7.55 K/9 and a .215 BABIP almost 100 points lower than his 2017 mark. That being said, Hildenberger entered game with a 93.6% LOB% showing his ability to pitch in and out of jams - but that wasn't the case Saturday.

Justin Smoak (1B-TOR) Smoak went 1-4 with a walk off home run Saturday afternoon vs the Tigers. It was the 11th shot of the season for Smoak who is considerably off his career high 38 home run pace of last season but he has now homered in back to back games, his first home runs of the season since June 3. Overall his 2018 line of .235/.359/.438 is much more in line with his career line then last year's breakout season. Smoak is walking at a career high rate of 15.8% which has allowed that number to surpass last season's mark. There are better overall options at 1B, but if Smoak can keep the OBP up and get back his power stroke he could potentially approach the 30-home run mark.