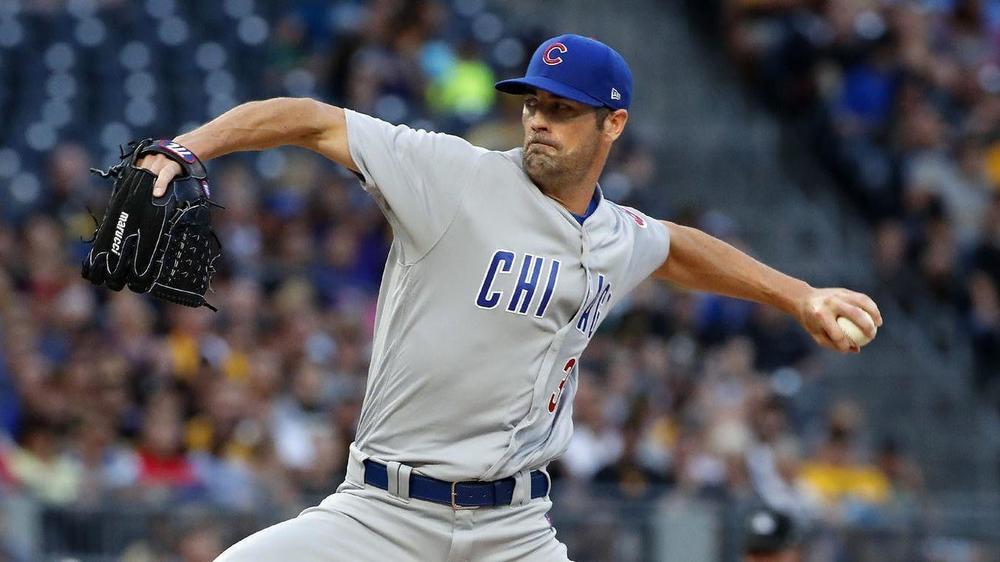 Cole Hamels (SP-CHC) Hamels posted his 4th straight strong start since being dealt to the Cubs, tossing 7 shutout innings vs the Pirates allowing just 5 hits, while striking out 3 and walking 2. While the strikeout totals weren't there this time, Hamels dominated the Pirates by inducing 16 ground ball outs and a ridiculous 5 double plays - negating any base runners that happened to get on vs him. Hamels success with his new club can be attributed to a few factors, most notably he has not allowed a home run over 25 innings as a Cub compared to a 1.8 HR/9 with the Rangers. He has also dropped his BB/9 from 3.3 to 2.0 since coming over. His strikeouts totals have been a little uneven as he has alternated with 9-2-9-3 totals. His 0.72 ERA as a Cub has help bring his season ERA down to 4.00 and he will make his next start vs the Reds Thursday.

Trevor Williams (SP-PIT) Williams turned in another solid outing Friday night tossing 7 IP of 1-run ball, striking out 4. Williams surrendered a solo home run to Kyle Schwarber in the 2nd, but otherwise was unscathed. Despite posting mediocre strikeout (6.00 K/9) and walk (3.00 BB/9) numbers and an ugly 4.27 FIP and 4.85 xfip when compared with his 3.53 ERA, Williams continues to find ways to pitch deep into games for the Pirates. He has been almost untouchable in his last 6 starts, allowing just 3 earned runs over 36 innings covering those starts while registering only 17 strikeouts over that span. He has held batters to a .264 BABIP - 8th lowest in the NL and has limited the longball with a miniscule 8.9% HR/FB rate. Williams mostly utilizes a fastball that sits in the low 90s and mixes in the low 80s changeup and slider every now and again which has allowed the crafty righty to limit hitters to a 30.2% hard contact rate, one of the reasons for his success this year.

Aaron Nola (SP-PHI) Nola tossed 7 innings of 3-hit, 1-run ball, striking out 11 in Friday's victory vs the Mets. Nola has been dominant all season and it is time to really start putting him in the CY Young conversation. Friday's start was no different as he baffled hitters all night, throwing 18 first pitch strikes and inducing 21 swinging strikes. While his K/9 is down slightly from last year to 8.71 Nola, has the second lowest HR/FB% (6.7%) in the NL and is 5th in the NL in generating a 50.6% GB%. Nola is also one of the few pitchers around the league that has consistently pitched deep into ball games - he has averaged 6+ innings per outing and has posted 19 quality starts, trailing only Max Scherzer and Jacob deGrom. Nola will make his next start next Thursday in an elite showdown vs the Nationals and Scherzer bringing a 14-3 record and 2.24 ERA into the outing.

Noah Syndergaard (SP-NYM) Syndergaard allowed 4 ER on 8 hits over 5 and 2/3 IP Friday. Syndergaard struggled out of the gate Friday, allowing the first 4 Phillies to reach base, and was fortunate to induce a double play from Carlos Santana or the damage could have been worse. Despite a slight downtick in K/9 from last year (10.09 vs 9.47) and an 8% drop in ground balls (57.6% last year vs 49.1% this year), those numbers would still both rank top 10 in the NL, provided he has not missed time earlier in the season and qualified for the ERA title. In a season when home runs are on the rise league wide, Syndergaard has limited opposing hitters to a miniscule 0.57 HR/9, despite a slight increase in FB% (23.5% to 26.6%). Overall Syndergaard will take a 8-3 record, 3.40 era, 1.25 WHIP and 105 strikeouts in 100 and 2/3 innings into his next start vs the Giants.

Austin Dean (OF-MIA) Dean went 1-4 with his first major league hit, a solo home run Friday. Despite not being even being a top-20 prospect in the Marlins farm system entering the season, Dean earned the promotion due to his hot hitting in the minors in 2018. He put up a scorching .420/.466/.654 line in 22 games at AA and continued to hit during 87 games at AAA posting an equally strong .326/.397/.475 line with 37 extra base hits combined across both levels. He posted rather high BABIPs across both levels (.437 at AA and .360 at AAA) but exhibited good plate discipline with a 9.2% walk rate and 13.7% k rate. Dean could see additional starts down the stretch as the Marlins attempt to find players who will fit into their future success.