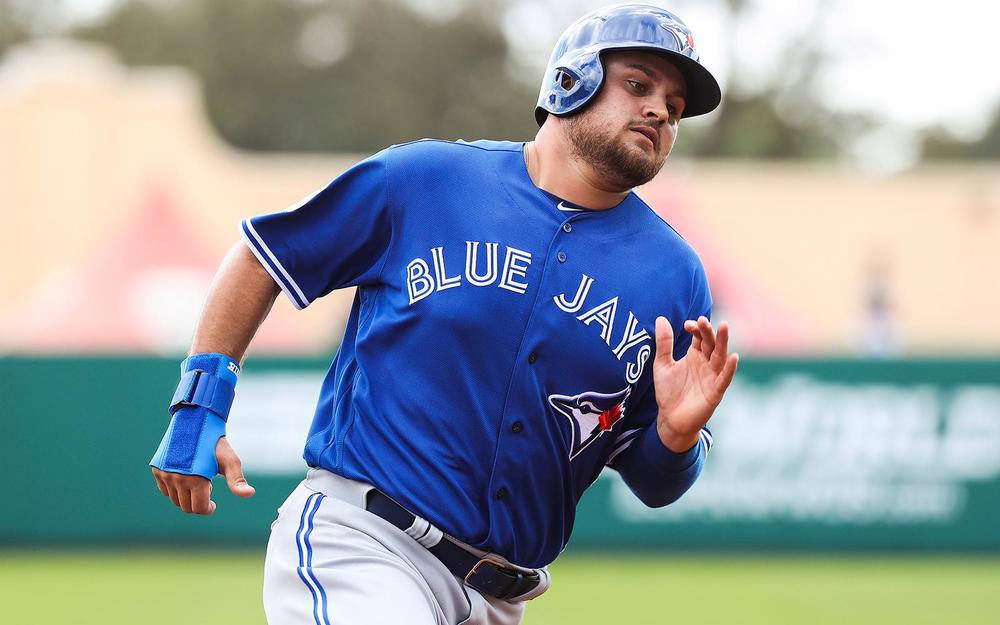 Rowdy Tellez (1B-TOR) continued his stellar MLB debut on Saturday against the Indians by going 2-4 with a walk and a solo home run, which was his first dinger of his young career. The 23 year-old is now batting .571 (8-14) with six doubles, a homer, four RBI, and three runs scored since making his big-league debut on September 5th. Tellez planted himself on top prospect lists in 2016 when he hit .297 with 23 homers and 81 RBI over 514 plate appearances in Double-A, but a rough 2017 in Triple-A (.222 with just six homers and 56 RBI over 501 plate appearances) brought the hype train to a screeching halt. He didn't exactly light the world on fire across 444 plate appearances in Triple-A this season (.270 average, 13 homers, 50 RBI), but he did just enough to earn a promotion to the show. In the minors, Tellez walked a good bit (more than 9% in each season since 2016), never struck out a ton (never more than 20.4% at any level), and has shown an ability to hit for average (other than his abysmal 2017, always .270 or above since 2014) and some power (dude is 6'4", 220 lbs.). If you want to shake things up at CI or UTIL, why not give red-hot Rowdy a chance?

Carlos Correa (SS-HOU) went 1-5 with a double and a run scored against the Red Sox on Saturday. Coming off a strong season in which he batted .315 with 24 homers and 84 RBI over 481 plate appearances as a 22 year-old, fantasy owners understandably expected big things from Correa in 2018. But he's disappointed, as he's now hitting just .242 with 14 longballs and 62 RBI across 420 plate appearances. He's especially struggled since the All-Star break, batting just .165 with a lone dinger and 13 RBI over 100 plate appearances. One of his problems this year has been striking out, as his strikeout rate is up to 23.8% after he whiffed 19.1% last season (20.5% career). His hard contact is way down, to just 29.3% after he recorded a 39.5% hard-hit rate last season (35.2% career). So although he's hitting more flyballs (35.3%, up from 31.7% last season and 30.4% career), he's just not hitting them well (his infield fly percentage is up to 10.6% - 6.6% last year). Even worse, his hard-hit rate since the All-Star break is a paltry 23.9%. Correa is certainly one of the more talented young players in the game, but he might even be droppable at this point if you are needing help at SS as the fantasy season winds down.

Adrian Beltre (DH-TEX) continued his recent hot streak by going 2-4 with a pair of home runs and three RBI against Oakland on Saturday. After hitting .286 with just four homers and 25 RBI across 261 plate appearances prior to the All-Star break, Beltre was batting .261 with 6 homers and 25 RBI in just 151 plate appearances during the second half entering Saturday's game, including .385 (10-26) with five longballs and seven RBI over his last seven games. One of the biggest changes for Beltre in his age-39 season has been a spike in strikeouts, as his 20.6% is well above the 10.3-13.4% that he annually posted 2010-2017. He's also hitting far fewer flyballs (just 32.8% this year, well below his career average of 38.9%), although he's lacing more liners than usual (27.2%, career 20.1%). In the second half, though, he's boosted his flyball rate from 29.1% before the All-Star break to 38.9% since, and that in tandem with a 40.7% hard-hit rate has contributed to his power surge. Beltre is clearly past his prime, but if he's available on your waiver wire he might be worth an add if you could use some power that won't kill your average down the stretch.

Charlie Morton (SP-HOU) came off the DL to earn his 14th win of the season on Saturday against Boston, although he lasted just five innings in which he gave up two runs on seven hits and two walks while striking out three batters. The final line is unimpressive and even though it came against a tough Red Sox lineup, it reflects Morton's work in the second half of the season. After logging a 2.96 ERA, 1.15 WHIP, and 3.12 xFIP over 112.1 innings during the first half, he had recorded a 3.63 ERA, 1.26 WHIP, and 4.32 xFIP across 39.2 innings since the All-Star break entering Saturday's contest. His strikeout rate has dropped from an impressive 11.70 before the break to 8.85 since, and his strand rate has dipped from 80.1% to 77.1% over that same span. Opposing hitters are also batting over 30 percentage points higher against him during the second half, too. This is most certainly regression toward the mean, as the 34 year-old Morton was on pace to easily top his career-best work in 2017; now, most of his stats should finish in the vicinity of last year's figures.