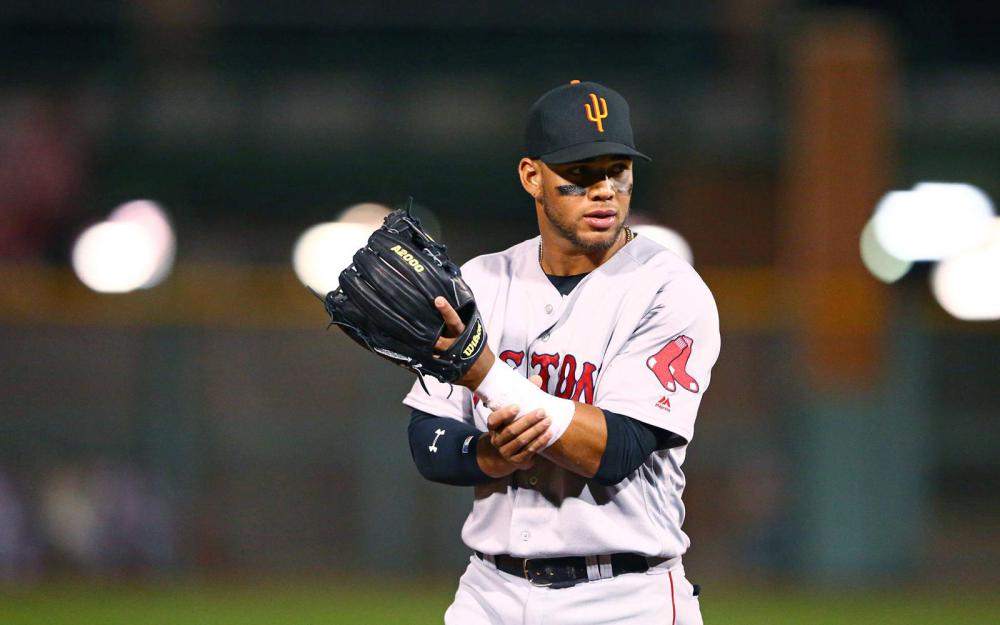 Ervin Santana (SP-CHW) - We'll give him a pass considering this was his first start for the White Sox, but at Santana was lit up for seven runs (three HR) in just 3.2 innings by the Rays on Tuesday. He also walked three while managing just one strikeout and leaving with a 17.18 ERA. Santana won 16 games with a 3.28 ERA and 167 strikeouts in 2017 (though a 4.46 FIP indicates he was pitching over his head) before missing most of 2018 with a finger injury. Santana was in the 89-91 mph range with his fastball, which is well off the 92+ he averaged from 2013-2017 before dropping off last year (88.8 mph) due in large part to the finger issues. The White Sox have top prospect Dylan Cease waiting in the wings at Triple-A when needed, and that time could come as soon as after Santana's next start, so he's going to have to turn things around quickly. Perhaps while the White Sox await Cease, they can use Manny Banuelos in the interim. Banuelos relieved Santana Tuesday and tossed 3.1 scoreless innings.

Chris Sale (SP-BOS) - I saw Sale get traded for Chris Paddack and Lorenzo Cain in my dynasty league and thought the return was rather light. That was before Tuesday however, and now the deal seems at least reasonable. Sale was hit hard by the Blue Jays, allowing five runs on seven hits with a 3:0 K:BB over four innings to take his ERA to 9.00 in 13 innings with a pedestrian 8:4 K:BB. Even when Sale recorded a QS in his last outing, he struck out just one hitter over six innings. The good news is that after averaging just 89.6 mph with his four-seam fastball in his last outing, Sale appeared to be up from that on Tuesday. He dropped as low as 88 on a few pitches, but dialed it up over 94 a couple times and was generally in the 91-92 range. Certainly not vintage Sale, but maybe those reports of an illness affecting his last start were true, as while the results weren't great Tuesday, the velocity was better. With no reports of any sort of physical issue, he should continue to improve as the weather warms up a bit.

Dustin Pedroia (2B-BOS) - Pedroia has returned from his latest IL stint and should be the team's primary second baseman going forward. Given Pedroia is 35 and coming off a season in which he managed just three games, expect frequent days off for the former MVP. Pedroia was still productive in 105 games back in 2017 when he hit .293/.369/.392 with seven home runs. He's probably limited to 10 home runs these days, and that's being optimistic. Pedroia has posted above a .131 ISO once since 2012, so the average power he once showed is gone. Pedroia though should still be good for a solid batting average, and though it's likely he'll hit in the bottom third of the order (seventh on Tuesday), he's still worth a look as a MI in mixed leagues and as a 2B in AL-only formats. There may be a little gas left in the tank, though not much.

Jordan Zimmermann (SP-DET) - Zimmermann has been a nice story early this year, allowing just one run in 13.2 innings with a 10:1 K:BB in his first two starts. Though the putrid Detroit offense left him 0-0, Zimmermann saw his fantasy ownership percentage skyrocket. So that happens next? Of course he allows five runs (four earned) over 4.1 innings Tuesday against Cleveland. You know thinks weren't going to go well when he allowed a leadoff homer to Leonys Martin. Zimmermann did strike out four, but he also allowed three home runs to see his ERA rise to 2.50. Zimmermann certainly isn't throwing any harder, but his control has been excellent, and before Tuesday, he had yet to allow a ball to leave the yard. That's been his big issue in recent years, as Zimmermann has seen his HR/9 jump from 0.59 in 2014 to 1.92 last year. If he can do a decent job keeping the ball down, he should have some success in that ballpark, even with his wins total likely to finish in the single digits barring an unexpected improvement in the Tigers' offense.