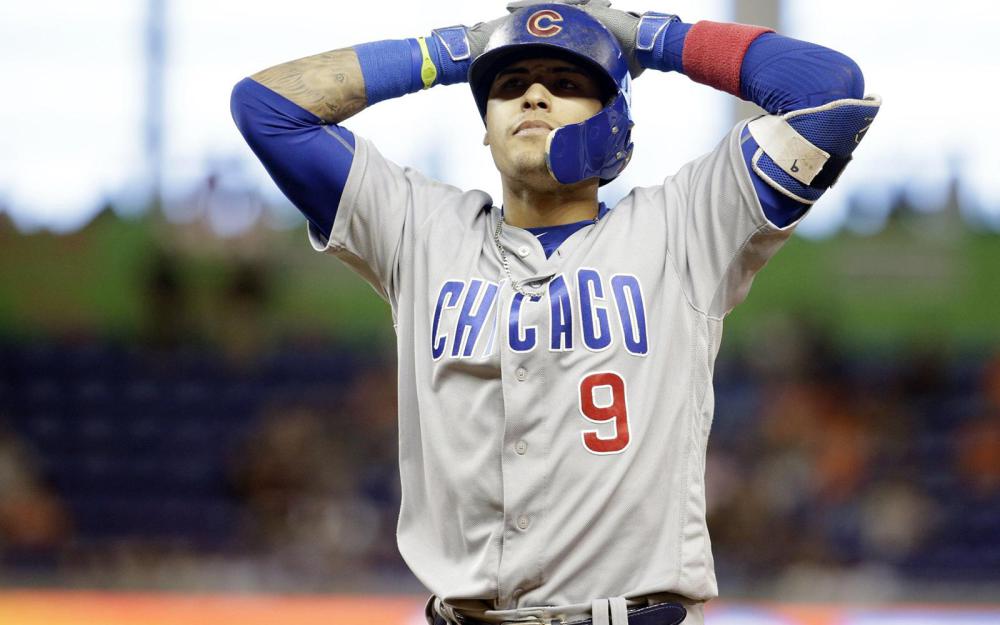 Javier Baez (SS-CHC) enjoyed a strong day at the plate against the Angels on Saturday, going 3-5 with a pair of RBI doubles. Coming off a breakout 2018 campaign, Baez has been merely human so far in 2019, as he now has a .262 average, 8 extra-base hits (4 homers), 12 RBI, and a pair of stolen bases over 64 plate appearances. After trimming the strikeouts to a reasonable 25.9% clip in 2018, that figure is now up to 32.8% in 2019 (although he didn't whiff at all on Saturday). While his 37.1% hard-hit rate is very good - even better than last year's 35.8% - he's wasting a lot of that quality contact on grounders, with a 51.4% clip representing a significant jump from his career 45.4% rate while his line-drives have evaporated from 22.1% last season to just 11.4% so far in 2019. Baez is clearly talented, but the regression that we anticipated coming into the season is coming to fruition.

Nolan Arenado (3B-COL) had another quiet day against the Giants on Saturday, going 0-4 with a strikeout. The 27 year-old superstar is now batting just .246 this year with 6 RBI and a stolen base to his name; he's yet to go yard once after going deep 38 times last season. He's not striking out much (just 9% of the time), but his contact profile raises some eyebrows. While his 35.8% hard-hit rate is solid, it's the lowest he's logged since 2014. The real eye-opener is the 24.5% soft-hit rate, which dwarfs his career clip of 15.4%. That's contributed to an uncharacteristically high infield flyball rate of 25%, which sits well above his career rate of 11.3%. Perhaps feeling pressure to live up to the expectations that come with a huge contract, Arenado may be pressing at the plate and making contact with pitches that he might not even have chased the last few seasons - his 7.5% walk rate in 2019 marks a noticeable decline from the 9.1%-10.8% that he recorded each of the last 3 years.

Brian Anderson (3B-MIA) showed signs of life against the Phillies on Saturday, going 3-5 with his first homer and first stolen base of 2019. The effort raised his season batting average to .231, and his .306 BABIP indicates that there is further room for improvement there - he logged a .332 BABIP in 2018 en route to batting .273. However, there are some warning signs here, as his 25.4% strikeout rate dwarfs last season's 19.3% clip, and his infield flyball rate is up to 18.2%. On the other hand, he's increased his hard-hit rate to 40.6% (was 38.2% last season) while trading some flyballs (37.5%, down from 51.8%) for liners (up to 28.1% from 19.7%) and flyballs (up to 34.4% from 28.5%). Considering the uptick in strikeouts and transformed contact profile, Anderson seems to be trying to tap into his raw power after hitting just 11 homers in 670 plate appearances last season. It will be interesting to see what this means for his average and actual power output going forward.

Madison Bumgarner (SP-SF) tossed 7 strong innings to earn the win against the Rockies on Saturday, giving up 2 runs on 6 hits and no walks while fanning 7. He now owns a stellar 3.12 ERA, 0.95 WHIP, 7.96 K/9, and 1.38 BB/9 on the young campaign. His 4.01 xFIP, however, draws our attention to a very low .224 BABIP against. On the other hand, his 63.2% strand rate is pretty unlucky, as is the 18.5% HR/FB that opposing batters have put up so far. The problem is that hitters are making hard contact against him at a staggering 50% clip, and they are hitting 62.7% of balls put into play into the air (43.1% flyballs and 19.6% liners). The primary culprit appears to be his cutter, which he has thrown 40.1% of the time yet has a wFC of -0.9 so far in 2019. Given the hard contact that Bumgarner has surrendered, expect his numbers to suffer as the BABIP against corrects to the mean.

Caleb Smith (SP-MIA) put together yet another strong start on Saturday against he Phillies, completing 6 shutout innings in which he surrendered only 1 hit and walked 3 while striking out 6. It seems that Smith has very much picked up where he left off when an injury prematurely ended his 2018 campaign (4.19 ERA and 10.24 K/9 over 77.1 IP), as he now boasts a 2.65 ERA and 11.12 K/9 through 17 innings of work in 2019. One of the most encouraging things about his performance to date is his improved control, for despite the 3 walks allowed on Saturday, his 3.18 BB/9 on the season is a significant improvement from last year's 3.84 clip. However, his 3.60 xFIP should caution his fantasy owners against taking his stellar ERA at face value, for a .194 BABIP against in particular is unsustainable, although his 82% strand rate is also due for some correction.