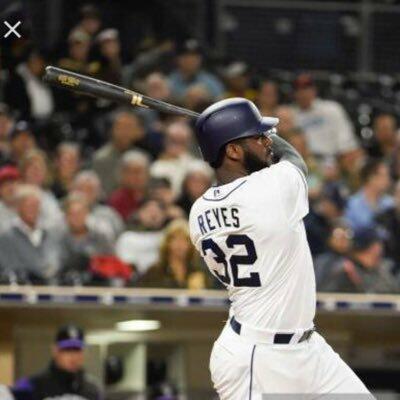 Franmil Reyes (OF-SD) - Reyes homered twice and chipped in a double on Tuesday to raise his line to an "interesting" .232/.286/.561. Hitting second ahead of Manny Machado certainly won't hurt a guy. Reyes finishes April with an impressive eight home runs and a decent, but not spectacular 20:7 K:BB in at-bats. Reyes hit .280 for the Padres last year, though at times in the minors, he has struggled to hit much more than .250, due in large part to an elevated K rate. Reyes appears to be pretty much an everyday player, though at times he could lose at-bats to Hunter Renfroe and/or Manuel Margot. The $3,700 Draft Kings price tag on Tuesday seemed a bit high, but kudos if you paid the amount regardless. It's only going up now, marking Reyes a questionable DFS play going forward, though maybe lightning strikes twice.

Addison Russell (SS-CHC) - If you're hoping Russell will greatly improve your shortstop production once his suspension lapses on May 3, you may be disappointed. The Cubs currently have no plans to activate Russell right away, and will seemingly leave him in Triple-A Iowa for now. He's hitting .250/.423/.500 in 26 PA there with one homer, a SB, and a 5:5 K:BB. In addition, it appears Javy Baez will remain the everyday shortstop, leaving Russell vying for time at other positions, including second base, where David Descalso has a .358 OBP and David Bote is slashing .279/.371/.525. It seems like the Cubs would be well-served in moving on from Russell, though they may have to release him to do that, as his trade value isn't exactly high these days.

Freddy Peralta (SP-MIL) - Peralta will come off the IL and start on Thursday after missing 2.5 weeks with a shoulder injury. Prior to this stint, Peralta was struggling to the tune of a 7.13 ERA in four starts. He had one gem in Cincinnati, pitching eight two-hit shutout innings with an 11:0 K:BB, but in his other 9.2 innings, he allowed 14 runs on 18 hits with an 11:7 K:BB. Peralta has actually increased his velocity over a full mph this year over last, and he looks to have a fair amount of upside after posing a 4.25 ERA and impressive 11.0 K/9 in his rookie year in 2018. That said, he's showing bouts of wildness in the minors as well as with the Brewers last year (4.6 BB/9), so the 23-year-old is far from a finished product. Expect the inconsistency to continue, making him more of a keeper league option than a redraft league option.

Zack Godley (P-ARI) - Godley has been awful this year, posing a 7.58 ERA through six starts, but I was still a bit surprised to see him demoted to the bullpen. After a breakout 2017 in which he put up a 3.37 ERA in 155 innings with a 9.6 K/9 and 3.1 BB/9, Godley has just gotten worse. His fastball is down nearly three mph compared to 2017 and the walks have gone up each year - 4.1 BB/9 in 2018 and 5.5 this year. His GB/FB rate has tanked from 2.6 to 1.3 over the last two year, so in that context, we can understand Arizona's thinking. Godley loses all fantasy value with the move, as he'll be nowhere near the closer role. So who replaces him? Arizona has yet to announce that. Jon Duplantier is an obvious name, but Arizona is still stretching him back out, so he's not an immediate option. Taylor Widener has a 12.27 ERA for Triple-A Reno, so he's out. My guess is they rotate unexciting options like Anthony Vasquez in and out until Duplantier is ready.

Alex Verdugo (OF-LAD) - With the news that A.J. Pollock has (shockingly) been placed on the IL with an elbow infection, expect Verdugo to finally be an everyday outfielder. Verdugo is off to a nice start, batting .333/.352/.623 with four homers in 71 PA. With an 11.3% K%, he's making excellent contact, though sure, we'd love to see his 2.8% BB% improve. That shouldn't be a long-term issue though, as Verdugo's BB%'s in his last two Triple-A stints were 10.5% and 9%, so he's not a hacker by any means, and the Dodgers aren't complaining about a .975 OPS. Verdugo has had limited PA against LHP this year, but in 11 PA, he has a 1.455 OPS. In addition, in 96 Triple-A at-bats last year, Verdugo hit a robust .396/.442/.542 against southpaws, so he doesn't appear to be a guy in need of a platoon partner. Go ahead and add Verdugo in 12-team mixed leagues if he's somehow available.