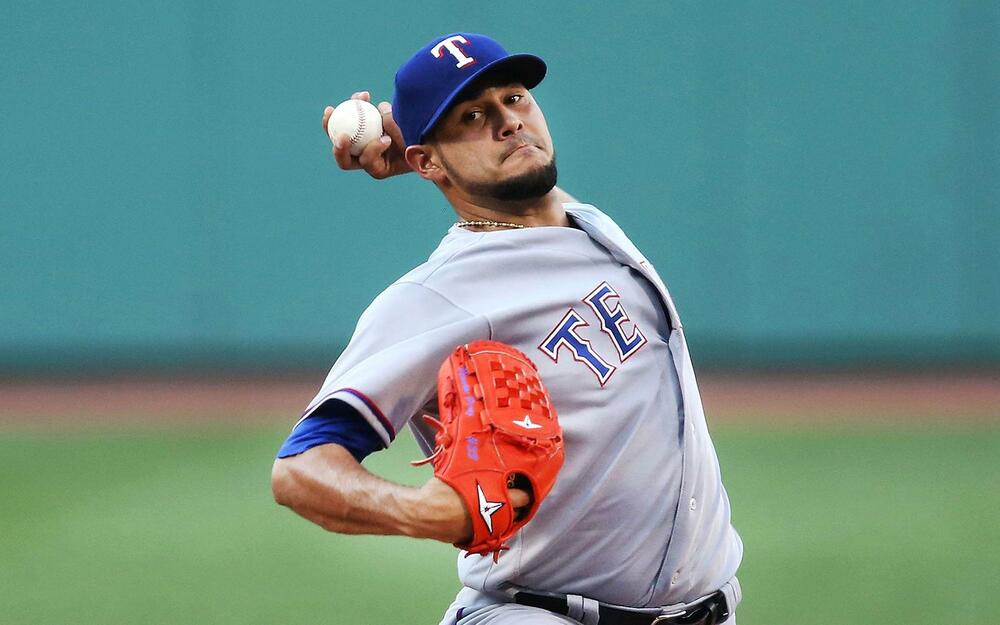 Frankie Montas (SP - OAK) - Montas was terrific against Detroit Friday, coming within an out of a complete-game while allowing 4 hits and 2 runs. Montas fanned 10 without walking a batter, which illustrates the two major improvements that he's made this season. He's added a bit of velocity, the new splitter isn't great on its own, but it seems to be helping the other pitches play up. The big thing is the control improvement for me.....down around 2 walks per nine is top notch stuff, and the raw velo and slider are major positives. He's a bit overvalued probably right now, but I can see a mid-3.00's ERA here going forward (xFIP coming into today was 3.64).

Christian Vazquez (C - BOS) - The 28 year old Vazquez is hitting better than I've ever seen him, as another pair of doubles on Friday give him 5 multi-hit games in his last 6 starts. He still isn't playing every day, which limits his value of course, but the huge improvement in chase rate combined with the 7.5% improvement in hard contact rate has helped push him into a viable role in most formats, what with the catching position being a wasteland and all. Vazquez has already almost matched last year's XBH total in less than half of the PAs, and I don't think this is all that fluky....the exit velo, HC, and chase rate stats lead me to believe this is real improvement.

Gio Urshela (3B - NYY) - The season-ending surgery for Miguel Andujar is a big boost to Urshela's value in the near-term (longer-term Didi Gregorius will be back and will likely push either Torres or Lemahieu to 3B), and as skeptical as I am about guys that say they've "figured something out", it does look like Urshela is hitting the ball with authority consistently for the first time in the majors. It's still a very small sample, but after posting partial seasons between 21-25% in hard contact three times, Urshela is just under 45% right now despite his continual need to swing at everything (chase rate above 40%). He hasn't shown much power at any level, but right now he's sitting comfortably in the top 25% in exit velocity, and his launch angle is higher than last year despite a rather low FB rate (his LD rate is almost 28%, though). The biggest thing here is simply the opportunity, especially once Judge and Stanton return, because there will be lots of R and RBI opportunities here. Urshela looks like an automatic pickup for me in deeper leagues right now, and although his ceiling is probably a little too low to justify a standard league waiver claim, he could project to enough value to fall into that "injury fill-in" sort of status.

Dylan Bundy (SP - BAL) - Bundy has looked a little less than horrible the past handful of starts, and he was even a bit better than that Friday in shutting down the Indians over 5 2/3 innings to pick up his second win of the year. He allowed three singles and three walks, striking out 7 and giving up an unearned run. There are some interesting positives in Bundy's otherwise ugly stat line this year: a major drop (7%) in hard contact rate, a 4th straight increase in swinging strike rate, and a career-best chase rate. The continuing velo drop and moderate control issues are concerning, as is the perpetually high HR/FB rate....at some point that isn't just bad luck. My inclination is to focus on the negatives here, as the degradation in stuff is pretty substantial over the past few years, but at 26 he is still young enough to learn how to become a consistent mid-rotation guy with this repertoire. The floor here is too low for me to feel comfortable with him, but those that are more aggressive could look at the past 4-5 starts and see a productive #5 SP.

Martin Perez (SP - MIN) - Perez has still allowed more than three runs just once in 7 starts, as Friday he held the Mariners to 1 run over 6 2/3 innings despite 9 baserunners (5 hits, 4 walks). I'm a little hesitant to say that a guy with one new pitch as his only positive offering has completely turned the corner.....he still walks quite a few batters and the BABIP and HR/FB rates are both very favorable to this point, but the velo bump and corresponding SS% rise are huge points in his favor. My temporary conclusion is that Perez has become a serviceable SP at age 28, but that regression is coming once hitters have enough of a book on this new cutter. It's a pitch he throws 35% of the time that no one had ever seen before, and most hitters scour videos of the SPs they are facing. An ERA closer to 4 than 3 the rest of the way should be expected, but I do think he will remain a top-60 arm with the improved raw stuff.