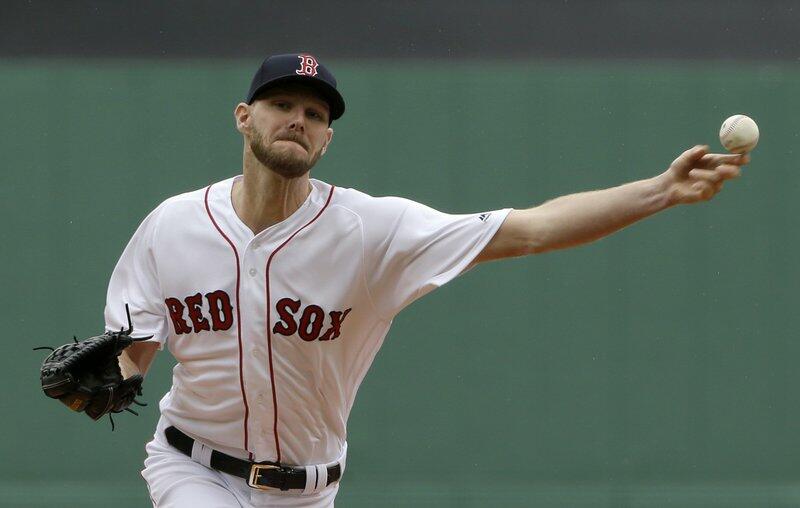 Sale dominated Toronto Thursday afternoon tossing 6 shutout innings, allowing just 2 hits while striking out 12. He baffled batters all day throwing 14 first pitch strikes and inducing 20 swinging strikes. Sale's ERA (4.05) is not its usually self and is a little bloated compared to his fip (3.38) and xfip (3.11) thanks in part to some struggles with stranding base runners (68% lob rate), a slightly higher-than-normal .316 babip and a 17.5% HR rate - the highest mark of his career. Sale is still delivering big time strikeout numbers sporting a 12.9 K/9, while limiting walks (2.11 BB/9). It is worth noting that his average fastball velocity is down over a mph to 93mph and he is allowing a career high 33% hard hit rate.

Reed played first base at hit cleanup Thursday going 1 for 4 with a walk and a strikeout. Since being acquired by the White Sox he has been getting regular playing time and has gone 5 for 18 (.278) with 3 RBIs. This is the 4th season Reed has received at bats at the MLB level, although he has just 12 combined the past 2 years after a disappointing debut in 2016 where he posted a .532 OPS covering 141 PAs with Houston. While he has struggled with a .224 avg for AAA with Houston this year the White Sox are inclined to take a chance on a player with excellent raw power (74 home runs over the past 3 minor league seasons at AAA) and an above average walk rate. He Still strikes out a ton with a 30% K rate over his limited MLB career but has hit the ball hard (50% hard hit rate) and high (62% flyball rate) in his first week of the games with the White Sox. He could be a cheap source of power down the stretch - but could also underwhelm in other fantasy categories as well.

Moncada had a big day Thursday going 3 for 5 with 2 runs scored and his 17th home run. Despite a decreased strikeout and walk rate, Moncada hasn't really changed his approach too much - the largest change being he is swinging at more pitches outside of the zone - an increase of 9% but still is maintaining the same contact rate. He may just be a little more comfortable at the plate, as he has increased his averages across the board including his ability to handle off-speed pitches - he has raised his average nearly 70 points to .275 vs changeups. Despite playing in the rebuilding White Sox, Moncada has been an every category contributor in fantasy, hitting 17 home runs, driving in 50, scoring 52 runs and stealing 6 bags - all while offering both 2B and 3B eligibility.

Starling had his first career multi-hit game going 2 for 3 with a double, 2 runs scored and a stolen base. It was a day of firsts as the former 5th overall pick collected his first multi-hit game, extra base hit and stolen base. He is now slashing .300/.391/.350 through his first week of MLB play, and has held his own thus far. Once one of the higher touted prospects in the game, Starling finally made his debut after hitting .310 with an .806 OPS with 7 home runs and 9 stolen bases. He has handled himself well at the plate thus far posting a 10% walk rate and a 26% K rate and he should continue to see regular at bats for a rebuilding and out of contention Royals club.

Devers went 1-4 with his 19th home run, a 3-run shot Thursday. After struggling in his first full look in 2018 Devers has made some small adjustments and as a result has become a key cog in the Red Sox lineup posting a .325/.379/.563 line with 73 RBIs and 74 runs scored. Devers has dropped his swinging strike rate 2% and as a result has put a great low strikeout rate (15%) while still drawing walks in 7% of his at bats. For good measure he has also stolen 8 bases in 94 games after stealing 8 combined over his first 2 seasons, covering 179 games. On a team with many other known names, Devers is the team's MVP to this point, and may even garner some National attention in the MVP race if he can keep up his hot hitting.