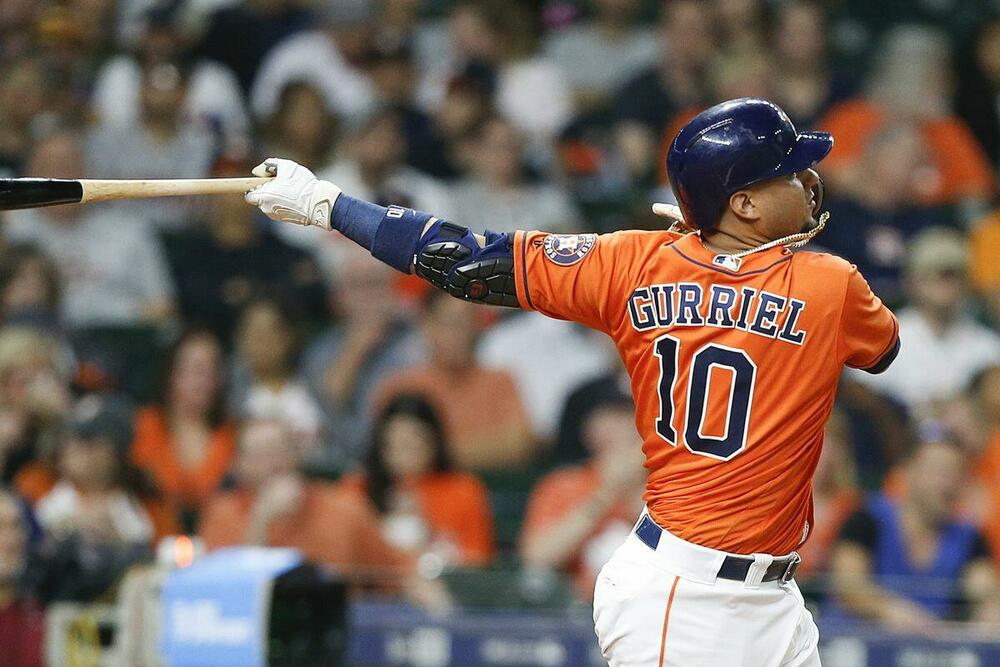 Gurriel went 2 for 4 with 3 runs scored 4 RBIs and his 14th home run of the season Sunday to raise his season line to .277/.314/.482 on the season. Gurriel has been swinging a ridiculously hot bat the past few weeks and enters the break with an 11-game hit streak. Even more impressive then the streak itself is he has pumped his home run total to 14 thanks to homering in 5 straight games (including 1 multi-home run game) and overall has hit 10 home runs over his past 11 games which has boosted his slugging % nearly 80 points. Prior to the start of his streak, he entered play with a meager .682 OPS and the recent surge has brought his numbers closer to his career mark and have roughly evened out his underlying metrics to what his career numbers looks like. He is still a contact-first hitter who rarely walks (4% BB rate) or strikeouts (11%) and only has a slight increase in his flyball rate to 39%. It's anyone guess what he does coming out of the All-Star break but I would continue to play him with confidence in a good Astros lineup as he has an outside shot at 100 RBIs for the first time in his career.

Brosseau went 1 for 4 Sunday. He has been getting regular playing time over the past week with Brandon Lowe hurt and thus far has continued his hot hitting that saw him put up a .317/.408/.590 line at AAA with 37 extra base hits (15 home runs) over 68 games. His 2019 stint at AAA saw him increase his walk rate (7% to 11%) while keeping his strikeout rate steady (17%) - good numbers for someone that was on pace for 30+ homers in the minors. It has only been a handful of games for the Rays, but Brosseau has displayed a strong contact rate (86%), with a low swinging strike rate (6%) while still hitting for power (.381 ISO, 5 xbh in 7 games). Even when Lowe returns from injury, Brosseau may be able to stick in the bigs if he keeps hitting, especially considering he has started games at every infield position at AAA this season, as well as picking up 4 starts in the outfield.

Alvarez went 3-5 with 3 RBIs Sunday to head into the All-Star Break with an out of this world .342/.415/.726 line with 7 doubles, 7 home runs and 25 RBIs in just 19 games since his callup. The Astros could not have expected that he would even come close to matching the 1.184 OPS, 23 home runs and 71 RBIs he put up at AAA before his callup - but that is exactly what he is doing. His .366 babip and 26% strikeout rate may be cause for concern, but he has always put up high babips in the minors and his 54.2% hard hit rate should continue to allow him to rack up extra base hits. Alvarez appears to be the real deal and recent murmurs of him getting some reps at 1B would only add to his fantasy value.

Urquidy made his second start for the Astros getting lit up allowing 5 ER over 2 and 1/3 IP vs the Angels. Urquidy has put up good strikeout numbers in the minors (12.2 K/9 over 76 innings this season) while limiting walks (1.8 BB/9) - and this been about the only positive from his first two professional outing as he has a 8:2 K:BB ratio over 6 innings. Urquidy has generally not graded out as a big groundball pitcher but was able to get most of his outs (66%) in his debut on the ground and picked up 2 more of his 7 outs in his second start via groundballs. The Rookie mixes a fastball that averages 94 mph with 3 other pitches, but owners may want to give it a few days coming out of the All-Star break to see if he remains with the team for additional starts.

Sisco stayed hot Sunday going 2-4 with his 6th home run of the season. His .283/.394/.667 line over 19 games is a small sample size, but its great to see the marked improvement following a dreadful .557 OPS season last year. While he is still striking out at a high rate (31%) he has his pull rate back well above 50% - like his small sample size of success in 2017. His walk rate is up slightly to over 11% and he has boosted his overall contact rate to 71%. His hot hitting may give him the inside edge to picking up a few additional starts as he is currently splitting playing time now. If he can keep up the power numbers and hit above .250 the strikeouts can be overlooked and he could be a nice pickup at the always thin catching position heading into the home stretch.