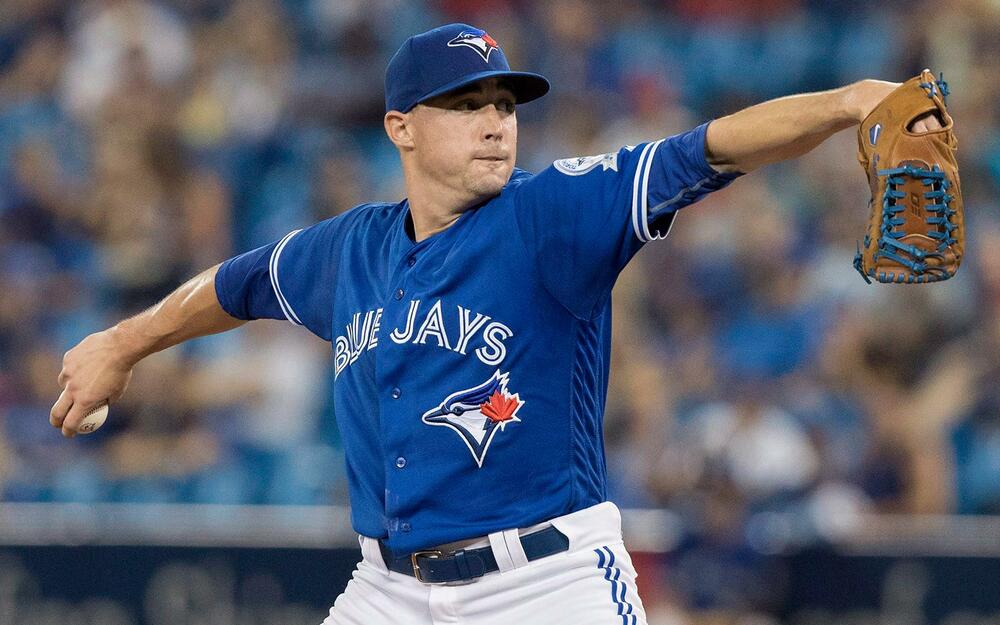 Aaron Sanchez (SP-HOU) tossed 6 innings of a combined no-hitter for the Astros, issuing only 2 free passes while striking out 6. After struggling through the season with the Blue Jays (5.76 ERA), he was stellar to say the last in his debut with Houston. His FIP sits at 4.91, which points to some very real problems with his season overall. He doesn't strike out a ton of batters (7.96 K/9) and issues a ton of walks (4.63 BB/9) while giving up plenty of hard contact (39.2%, easily a career high). He's also a 53% career groundball pitcher who has induced only 47% grounders this season. But we've seen Houston turn pitchers' careers around before, so it might be worth adding Sanchez to your fantasy roster in case he can help you out down the stretch.

Chris Sale (SP-BOS) got lit up by the Yankees in the first game of Saturday's doubleheader, coughing up 8 runs on 9 hits and no walks while striking out 4 over 3.2 innings of work. The 30 year-old now owns a disappointing 4.68 ERA on the year, but his 3.55 FIP indicates that he's suffered from some poor luck. Normally a guy who maintains a strand rate of about 78%, that figure has been just 67% this season while his BABIP allowed is inflated (.319) compared to his career average (.293). Key parts of Sale's profile remain strong, such as his 13.09 K/9 and 2.37 BB/9, but he's allowed significantly more hard contact (up to 34% from 28% career) and a lot more home runs than usual as his 1.49 HR/9 dwarfs his 0.94 career clip. That, however, rides on an inflated 19.6% HR/FB that is a huge departure from his 11.8% career rate. The bottom line is that Sale is still an ace but has run up against quite a bit of misfortune in 2019.

Domingo German (SP-NYY) handled the stout Red Sox lineup in the first game of Saturday's doubleheader, giving up just 2 runs on 5 hits and no walks while striking out 7 over 7 innings of work. The 26 year-old breakout now owns a 3.98 ERA on the year to go along with a solid 9.87 K/9 and very good 2.08 BB/9. His 4.43 FIP, however, points to a suppressed .256 BABIP artificially suppressing his ERA. German has given up a good bit of hard contact (39.2%) and a lot of homers (1.82 HR/9), although his 19.1% HR/FB seems a bit fluky. He's guy who doesn't induce a ton of grounders (40%) and makes half his starts at Yankee Stadium, so it wouldn't be too surprising if that hard contact gets him into some trouble going forward. Fortunately for German, the low walk rate will help to minimize the damage.

Byron Buxton (OF-MIN) landed on the 10-day IL as a result of a partial left shoulder separation suffered during a collision with the outfield wall during Thursday's contest in Miami. The 25 year-old former top prospect was hitting just .262 with 10 homers, 46 RBI, and 14 stolen bases through 295 plate appearances on the year while struggling to stay healthy (he had 2 previous stints on the IL). Although the surface numbers won't pop off the page at you, he did improve in some key areas this season. His 23% strikeout rate is a huge improvement on his 30% career clip and his 35% hard-hit rate easily bests his previous high of 30%, set last year. And as was the case in 2018, Buxton was gearing up for a strong stretch run, as he was batting .324 with a homer, 6 doubles, 4 RBI, and 2 stolen bases in just 35 plate appearances since the All-Star break.

Vladimir Guerrero, Jr. (3B-TOR) went 3-4 with a double and an RBI against Baltimore on Saturday. Some experts seem to think that the 20 year-old phenom has made a disappointing big-league debut in 2019, but he's now batting .274 with 13 homers and 49 RBI through just 339 plate appearances. His 17.1% strikeout rate is higher than anything he posted at any stop in the minors, but doesn't at all suggest that he's been overmatched. Moreover, he's continued to walk at a nice rate (10%) while making hard contact at a solid if unspectacular 37.6% clip. Maybe that's all disappointing given the sky-high expectations that pretty much everyone had for him based on his domination of minor-league pitching, but it's worth noting that he was batting .324 with 5 homers and 23 RBI in 74 plate appearances since the All-Star break after hitting .249 with 8 longballs and 25 RBI in 225 first-half plate appearances. The strikeout rate is also down to 13.4% from 18.6% while his hard-hit rate is up slightly from 37.4% to 38.1% while he's slashed his soft contact from 22.4% to 15.9%. And I go back to this: he's just 20.