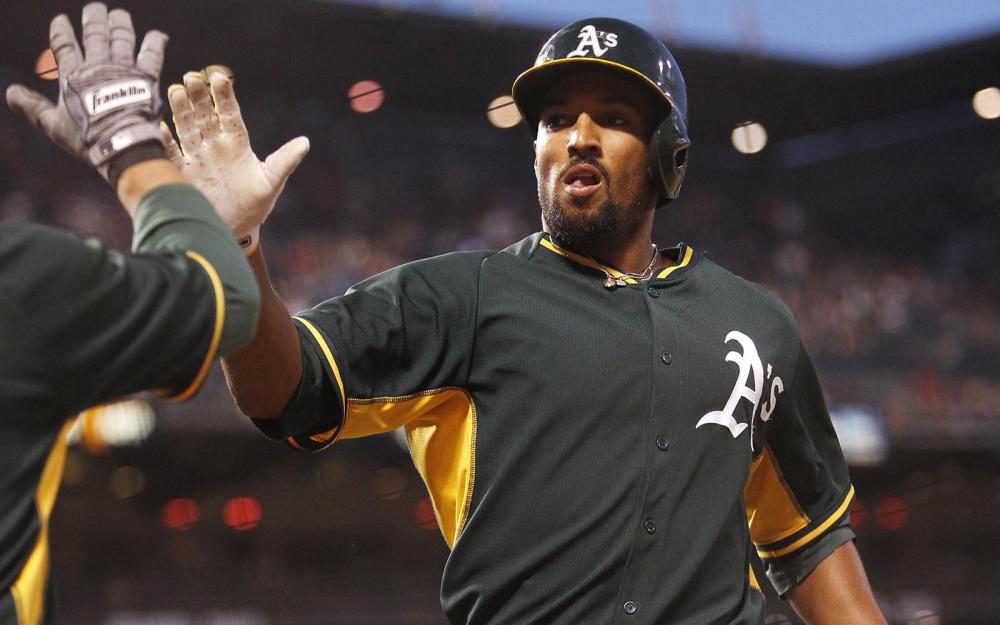 Marcus Semien (SS - OAK) - After being remarkably consistent (and mediocre) over his age 24-27 seasons, Semien has made huge strides this year to become a very solid offensive player. The past two years have seen him cut his swinging strike rate from 10.3 to a stellar 7.1, and the hard contact rate has jumped to just over 40% this season to add a bit more power to the improved contact. He's heated up even more recently, ranking 11th in MLB offensively over the last few weeks. He's on pace to score around 120 runs, he's walking almost as much as he's striking out, and he has a solid chance to hit 25 HR and steal 10 bases. He's really having one of the quietest excellent all-around seasons (he's a great defender as well) that I can remember. For all of the drooling over Jorge Polanco, Semien has been just about as valuable on offense this year....for me he's a clear top-10 at the position.

Max Kepler (OF - MIN) - Kepler had a pair of walks and a pair of doubles on Friday as he continues his hot streak, making this 6 games in the past 8 with XBH. Kepler has been pretty unfortunate during this breakout season, believe it or not, as despite the best LD and hard contact rates of his career by a sizable margin, his BABIP is actually below his career average of .255 at just .251. He's become a pretty extreme flyball hitter the past two years, and that combined with a massive pull% this year (57.1%!!) would lead you to expect a low AVG, but he's really a pretty good contact hitter with a career rate of 81.2% (81.9% in 2019). We all love the power, but I'm curious with his skill set if he could cut down a bit on the pull/uppercut swing and actually provide more value.....at some point getting on-base is important as well, and a .339 OBP for a guy that hits the ball as hard and as often as Kepler with his strike zone judgment is extremely low. I do believe he's still growing as a player at age 26, and there could be another gear here that would vault him into the elite category...I don't mind gambling on it heading into 2020, as the floor seems quite solid after this year's gains.

Martin Perez (SP - MIN) - Perez has regressed a bit further than I expected a few months back, coming all the way back to a roughly league-average SP level. The velocity bump from early on in the season is virtually gone....there's been a noticeable drop-off over the past 6-7 weeks. He had no games with average velo of less than 94.1 prior to 6/15, since then he's had 4 out of 7 coming into Friday's outing, in which he allowed 5 runs on 3 homers over 5 innings to KC. The control remains an issue, the K's continue to fall along with the velo.....all in all, he looks like a guy that is roster-fringy to me right now in standard formats. The cutter is still working pretty well for him, but everything else isn't and one-note pitchers don't tend to work out all that well (no offense, Mariano). I'm certainly removing Perez from any of my lineups if I haven't before now, and I'm considering cutting him in the majority of formats.

Derek Fisher (OF - TOR) - Fisher is a guy that clearly has seen a value bump this week, as he moves from a completely blocked situation in Houston to a path to at least somewhat consistent playing time in Toronto. I think he will at least play against most RHP for the time being at the expense of one of Grichuk or Hernandez, and there's some opportunity here for Fisher for sure. All he really lacks in contact ability in his offensive profile, as he has a good idea of the strike zone, has plus power, and at least plus speed. If he played every day he's at least a 20/15 guy, and any increase in contact rate would push the HR number up even further. I like him as a speculative pickup in deep leagues already, and I'll be watching his playing time closely to see just how much value he might provide in standard formats. Fisher was 1-4 with a single and an RBI in his first start with Toronto on Friday.

James Paxton (SP - NYY) - Paxton was outstanding on Friday, but he continues to be plagued by a couple of things: decreased control and an inordinate number of mistakes leaving the park. One of those is well within his control, but the other is pretty much random, so I do expect his performance to improve for the remainder of this year and moving forward into 2020. The bat-missing ability is fully intact, as evidenced again Friday by the 20 swinging strikes in just 100 pitches, but at just 6-6 with a 4.61 ERA we all expected more. I certainly expect better numbers than that for the stretch run.