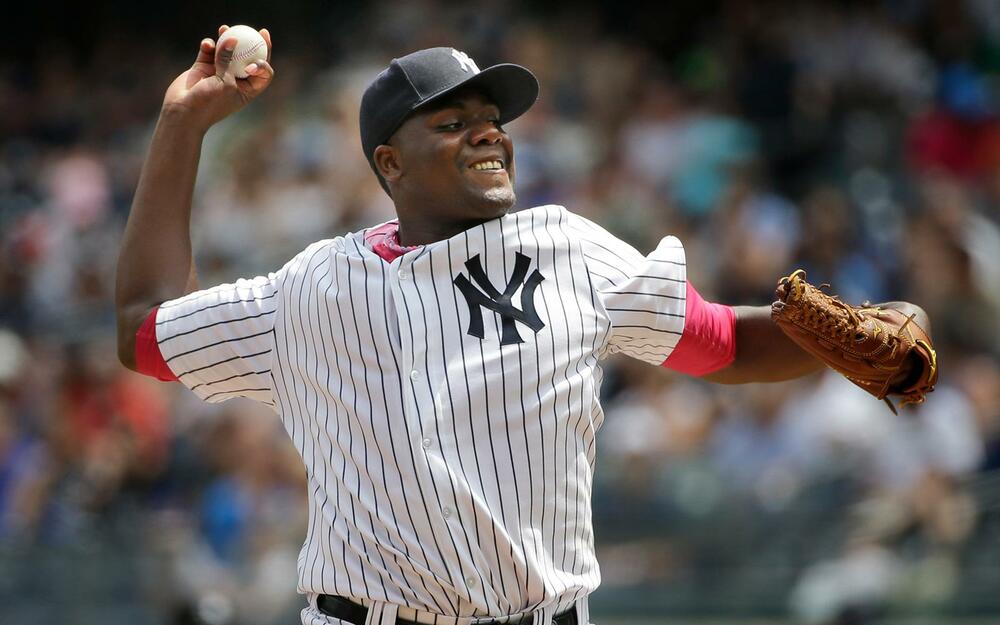 Nick Solak (2B/3B - TEX) - Nick Solak has hit very well since coming up to the majors, going 333/451/524 in 13 games with 3 2B, a 3B, a HR, and a SB. Between the hitting environment and the obvious need for some more offensive talent in Texas, I expect Solak to continue to play the rest of the way, and he could easily open up 2020 in a starting role. He makes for a solid pickup for this last month as well....I wouldn't extrapolate his minor league numbers to forecast 30/20 or anything like that, but he could be a 20/10 guy right off the bat with room for upside, and he's just 24 and has been batting cleanup recently. He's been unbelievably hot since coming over from Tampa, but a lot of that has been fueled by some extremely high BABIPs, so temper your enthusiasm just a bit. He does look like a potential average 2B offensively with the possibly of average-plus, which will have value.

Hanser Alberto (2/S/3 - BAL) - Alberto is scorching right now, starting September off with a single, double, and 2 runs scored after hitting 354/387/576 in August with only 7 K's in 99 AB's. Alberto and Willians Astudillo are two peas in a pod: they both swing at everything and somehow tend to hit just about all of it, just not making optimal contact as much as they would if they were at all disciplined. While Astudillo has had some pretty awful luck via BABIP, Alberto has not, and there you have it. I especially like Alberto against LHP, and he gets to face another one on Monday in the person of Ryan Yarbrough. Yes, Yarbrough has been good, but the O's have gotten to him a couple of times this season, and Alberto is only priced at $3700. I think he's a very solid value option as a one-off on the slate.

Sean Murphy (C - OAK) - There aren't a ton of potential impact rookies coming up for the 9/1 roster expansion, but 24 year old Sean Murphy is definitely a guy that could swing a few fantasy races. A potential plus hitter for both average and power, Murphy is expected to at least jump into a job-share with Josh Phegley behind the plate, and he could very well start the majority of games in September. Unlike a lot of young catchers that can hit, his defense is not a liability at all, and the .308 AVG and 10 HRs in 140 PAs at AAA give you a glimpse of his potential offensively. I would definitely look to add in all formats unless I were one of the fortunate few that don't need an upgrade at catcher.

Abraham Toro (3B - HOU) - Abraham Toro continues to play most of the time with Carlos Correa on the shelf, and he hit the 2-run, 9th-inning HR that allowed Justin Verlander to finish off his 3rd career no-hitter on Sunday. One of personal "hunches" is that guys from the north (who are reasonably rare in baseball) can take a bit longer to develop with the lack of repetitions that they get growing up, and as a native of Quebec that certainly applies to Toro. He has solid contact ability and a bit of power, perhaps enough to be considered major-league average in both areas....the contact ability in particular seems to have taken a step forward this year with a sub-10% K rate in his last 110 PAs at AAA and MLB. The problem here, of course, is the depth of the Astros. Toro is a reasonable pick-up for the short-term, but Carlos Correa won't be out more than another week or two in all likelihood, and there doesn't seem to be room at the inn after that. The entire infield is signed at least through next season, so it wouldn't be surprising to see Toro back in AAA to start the year. As such, he isn't really someone to look at next spring barring some offseason personnel changes for Houston.

Michael Pineda (SP - MIN) - Pineda has been taking advantage of the schedule since coming off of the IL in mid-August, putting up a swinging strike rate of close to 15% in his past 4 starts while picking up the win in all of them. The September schedule isn't quite as juicy for him, but it's decent enough (CLE, WAS, CWS, KCx2) that I think he's a reasonable add for the last 5 starts. ERA is usually the issue (it's almost always HR problems for him)....WHIP and K's are pretty solid, and the win potential is very good as well.