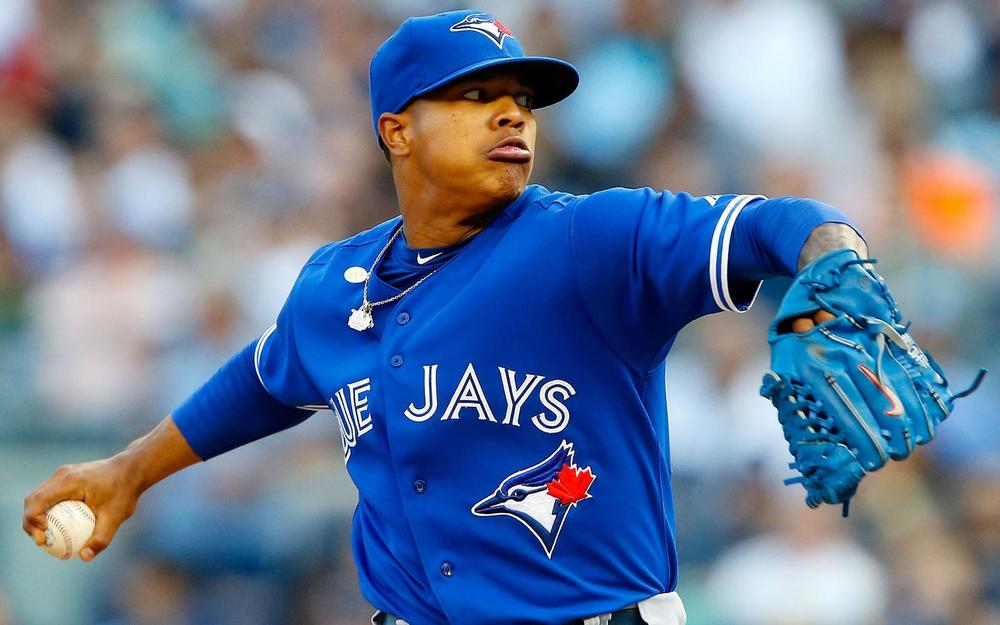 Marcus Stroman (SP-NYM) - Stroman turned in a huge outing Tuesday to keep the Mets' very faint playoff hopes alive, tossing seven scoreless innings in Coors Field against the Rockies. He allowed just four this while striking out seven in lowering his ERA to 3.21 on the season in his 30th start, a plateau he's now met in three of the past four seasons. Stroman has had his ups and downs this year, but overall it's been a strong season and his 7.8 K/9 is a career best. He's been one of the top GB pitchers in the league the last few years, though his GB% has actually regressed to 53.9% this year after four straight seasons at 60%+. Maybe that's not a coincidence given that the usage of his sinking fastball has dropped from 44% to 37%, but at the same time, his slider has been more effective and he's using it more often. Either way, what he's doing has worked and Stroman in the NL next year should be a solid late-round option in mixed leagues.

Drew Pomeranz (RP-MIL) - Drew Pomeranz, MLB closer? Not full-time just yet, as Josh Hader is still alive, but Pomeranz recorded save #2 this month on Tuesday with a pair of scoreless innings against the Padres. He retired all six hitters he faced, striking out four of them. In 26.2 innings since converting to a relief role, Pomeranz has a 2.03 ERA, and he's striking guys out at a ridiculous rate with a 44:9 K:BB in that span. This is the same guy that went 17-9 with a 3.32 ERA for the Red Sox in 2017, but he fell apart last year and continued his mediocrity with the Giants this season before finding new life in the Brewers' bullpen. It seems unlikely he sees too many saves the rest of the way this year, and it's doubtful that a team signs him to be their closer over the winter, but Pomeranz at 30 seems to have found new life in a new role.

Chris Paddack (SP-SD) - In what could very well have been his final start of 2019, Paddack threw a gem, holding the Brewers to one hit (a Lorenzo Cain HR) over five innings. Paddack walked one and fanned nine. If he is done, Paddack finishes a fine rookie season having pitched to a 3.33 ERA and 144:30 K:BB in 135.2 innings. With a 7.50 ERA in August, it appeared Paddack had run out of gas, but in three September starts, the 23-year-old has allowed just one run over 16.1 innings with a 24:4 K:BB. Paddack tossed just 90 innings last year, so it was a fairly sizeable increase. Will he be limited in 2020? Maybe a little, but if I had to guess, the 6'5" workhorse may get bumped to 170 innings, which these days, is a full workload. Paddack's fastball clocks in at a tick below 94 mph, so he's not Verlander out there, but his change is already among the league's best. He's a top-15 starter in 2020.

Keone Kela (RP-PIT) - The child solicitation charges surrounding Felipe Vazquez are beyond disturbing, and hopefully police will get to the bottom of the allegations and that justice (either way) is ultimately observed. It almost feels wrong to bring up the fantasy side of this, but that's what we have to do I suppose. At this point, Vazquez returning this year as the Pirates' closer (or even next year really) seems highly unlikely. He's been placed on the restricted list pending police findings. With Kyle Crick already out for the year thanks to Vazquez as well, the closer role is wide open for the foreseeable future. Contenders could include Ricardo Rodriguez, Michael Feliz, and Kela. I'm leaning Kela pending further information from the Pirates. He's posted a 2.45 ERA and 0.94 WHIP in 25.2 innings, including allowing just one run in his last 19 innings with 23 strikeouts. Kela has the stuff (96.1 mph average fastball), and he had 24 saves last year, giving him that valuable experience.