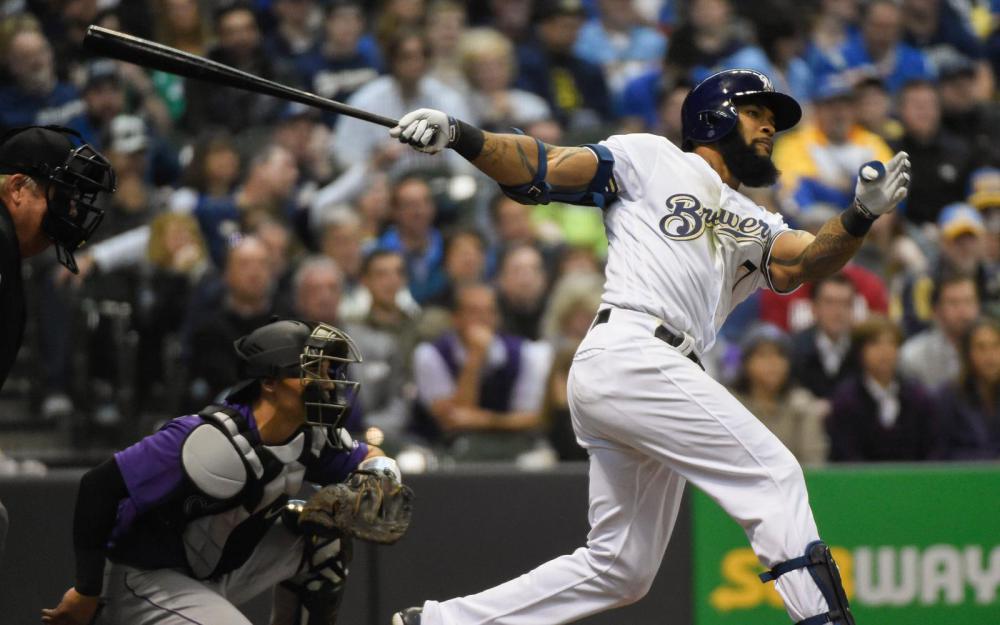 Thames went 0-3 with a pair of strikeouts against the Cardinals on Friday. Thames has struggled lately (.536 OPS in the last week) and tends to sit against lefties, but fantasy owners should be buying into him as much as possible as he appears primed for a big finish to the year. Thames' peripherals have looked largely solid over the past week despite his declining results, but the most encouraging aspect of his future performance is his schedule. For the rest of the month, the Brewers face the Cardinals, Pirates, Padres, Reds, and Rockies, teams that combine to account for three lefty starters between them (Thames owns a .888 OPS against righties for the year and a .668 OPS in his limited opportunities against southpaws). In addition, the series against Cincinnati and Colorado are away games for Milwaukee, and Thames' fly ball heavy batted ball approach and solid power should induce a hot streak that could help carry fantasy teams down the stretch. Expect a strong finish to the year out of Thames, and buy low if possible (but don't be afraid to pay a little extra either).

Lester escaped with the win against the Pirates on Friday, allowing seven runs (four earned) over five innings with just two strikeouts. Lester has largely struggled for the Cubs this year but had a particularly poor August and had struggled in two September starts prior to Friday's game. Lester's pitch mix has changed somewhat dramatically over the course of the season, and over the past month or so he's limited his four-seamer usage in favor of his cutter and sinker. Unfortunately for Lester, his sinker is arguably the worst pitch in his arsenal (worst by xwOBA and second worst by swing and miss rate), and his cutter performs like a below average pitch as well (based on xwOBA and whiffs/swing). One interesting (and encouraging) aspect of Lester's adjusting pitch mix is that his cutter and sinker have both seen their spin rate increase significantly so far this month, leaving the door open for some optimism down the road. Still, Lester's overall performance and arsenal are uninspiring, and fantasy owners shouldn't expect much from him through the rest of the year.

Rizzo went 3-5 with a grand slam and two runs scored against the Pirates on Friday. Rizzo has played well this year but has struggled lately with a .587 OPS over his last seven games. An increased ground ball rate and decreased hard hit rate have fueled Rizzo's recent slump, but a plate approach issue appears to be the primary driver of Rizzo's poor performance. Rizzo's z-swing and z-contact rates have largely held steady over the past week, but his o-swing and o-contact rates have both spiked, indicating that a greater percentage of Rizzo's contact has been on pitches outside of the strike zone. As a result, Rizzo's contact quality has declined, resulting in his .174 BABIP for the week. It is worth noting that Statcast appears to attribute Rizzo's slump to luck, giving him a very strong .397 xwOBA for September (.307 wOBA), but Rizzo's plate approach will be worth monitoring down the stretch this year, and daily fantasy players may do well to generally avoid Rizzo until he cuts his o-swing rate back down.

Hoffman allowed four runs over 5.1 innings with four strikeouts against the Padres on Friday. Hoffman has pitched poorly this year, and the 26-year-old took a 7.06 ERA into Friday's game. Hoffman's fairly small sample of innings make ERA estimators less reliable than they could be, but Hoffman's 5.03 xFIP is a lot more encouraging than his ERA, and SIERA likes him even more, giving him a 4.70 mark (projections (relatively) like Hoffman too, with ZiPS expecting a 4.67 FIP next year). The key for Hoffman will likely be his curveball; he's upped his usage of the pitch this year significantly, and it has the potential to be a real weapon in his arsenal. Hoffman already owns a solid fastball that touches the high 90's MPH and boasts a spin rate that ranks in the 89th percentile of fastballs, and his curveball looks good too with an above average rate of whiffs/swing and a sparkling 0.196 xwOBA (as well as an above average spin rate). If Hoffman can develop a third pitch that he's comfortable with (probably his changeup, which has looked decent but not great this year), then he has a solid shot at being fantasy relevant next season (moving away from Coors Field wouldn't hurt either). Keep an eye on Hoffman's arsenal going forward, and monitor him as a potential sleeper pick for next year.

Newman went 3-5 with a double against the Cubs on Friday. Newman has become a staple in the Pirates lineup with an .802 OPS, and the 25-year-old has seen his performance rise dramatically over the past few weeks. Newman boasts elite contact skills (94.4% z-contact rate, 76.5% o-contact skills) that until recently had been somewhat held back by a poor plate discipline profile (37.4% o-swing rate, 69.5% z-swing rate). An improved plate approach has coincided with Newman's hot streak though, and he's seen the fifteen-game rolling average of his o-swing rate fall from a high of 47.1% on August 23rd to 29.2% entering Friday's game. As a result, Newman's contact and hard hit rates have risen, leading to his improved performance. Newman won't stay quite this hot over the rest of the year (his .476 xwOBA over his last fifteen games would be the highest full season mark by nearly 30 points), but fantasy owners should be very encouraged by his recent performance, and his recent trends bode well for his 2020 outlook.