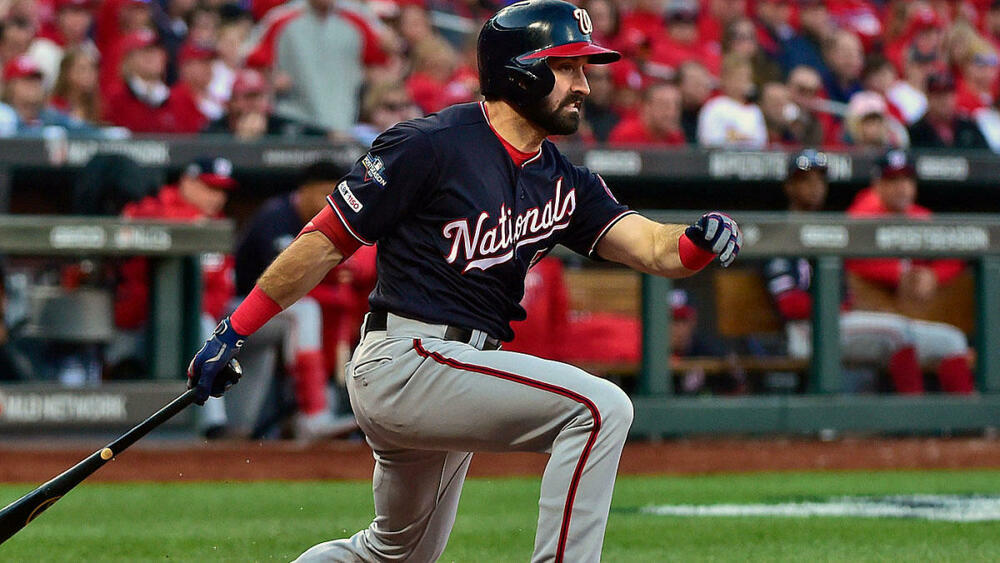 Eaton homered in his first at bat of the season Thursday, the only hit off Gerrit Cole over a 5-inning rain shortened game. The 31-year-old veteran put together his first injury-free season last year since 2016 and has a modest .792 OPS with 15 steals and home runs apiece, while topping 100 runs for the first time in his career. Eaton's contact first approach (84% contact rate, 6.8% swinging strike rate) could lead to him being near the top of league in runs scored again, as is always a sneaky RBI bet to hitting behind one of the fastest men in baseball, Trea Turner.

Kike Hernandez (2B/OF-LAD)
Hernandez had a monster game opening night going 4-5 with a HR and 5 RBIs. Despite a subpar .715 OPS in 2019, the Jack-of-all trades Hernandez suited up at least once at every position other then pitcher and catcher last season, and with Gavin Lux starting in the minors and the DH universally available his path to playing time has opened up a bit more, at least to start the season. He had a bit of a breakout season in 2018 with an .816 OPS and a career low 16.7% K rate and a career low 8.6% swinging strike rate. He then reverted to his previous ways last year as his walk rate dropped 3% and his strikeouts rate got worse by 5%. Hernandez swung at a much higher percentage of pitches outside of the zone last year (24% in 2018 with 31% last year) and it seems all progress he made in 2018 with regards to plate discipline was lost. Hernandez has always been a bit of a platoon guy, struggling vs righties (.221 career mark) while holding his own vs lefties (.266). His positional flexibility and ability to hit lefties makes him a good bench piece to play as needed.

Yastrzemski hit leadoff and played center field picking up a multi hit game in the opener. Yas was a feel-good story last year, after 6 years of putting up mediocre numbers in the Orioles minor league system he impressed with a 1.090 OPS and 12 home runs to earn a call up to the Giants for the first time where he was arguably the Giants most feared hitter slashing .272/.334/518 with 22 doubles and 21 home runs over 107 games. As the Giants leadoff hitter it would good of him to cut down on his k rate (26%) and up his walk rate walk (7.8%) but as the Giants best hitter they may just be wanting to get him as many at bats as possible. I like him to put up an .800 OPS with an outside shot at double-digit home runs.

With Clayton Kershaw a late scratch May picked up the opening night start, tossing 4 and 1/3 innings, allowing 1 ER on 7 hits, while striking out 4. Despite allowing Giants runners all evening he still looked sharp at times- throwing 12 of 20 first pitches for strikes and generating 6 groundballs. May pitched well in limited 2019 action pitching to a 3.63 ERA with 32 strikeouts over 34 innings. The youngster features a great fastball averaging 96mph, and despite a curveball that features a vertical drop near the top of the league, he didn't use it a lot and hitters smashed it (7 hits in 14 at bats). May features modest strikeout numbers in the minors striking out between 8-9 per 9 innings but was super effective with his groundball generation racking up groundballs at a 60% rate in the minors and posting a 44% rate last season.

Tyler Heineman (C-SF)
Heineman had a nice game hitting 9th and catching picking up a multi-hit game to open the season. With Buster Posey opting out and top prospect Joey Bart seemingly not ready for big league at bats it could be Heinemans job to lose if he can hit. He looked good in AAA -year ago, splitting time with the Marlins and Giants organizations slashing .336/.400/.636 with 13 home runs, 3 triples and a 21:35 BB:K ratio. Even more impressive is Heineman dropped a bunt single down the third base line with a shift on - something not all hitters are willing to do. If you don't have one of the games elite hitting catchers keep an eye on his performance over the first few games .