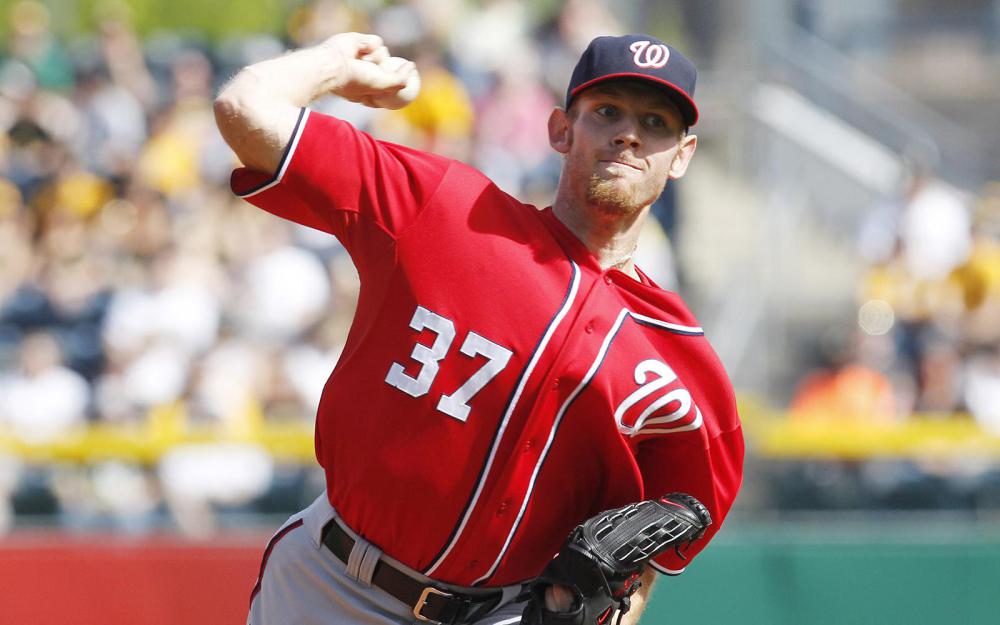 Stephen Strasburg (SP-WSH) made his first start of the 2020 campaign against the Orioles on Sunday. The 32 year-old (Where has time gone? I seems like it was yesterday that he was being touted as one of the game's greatest prospects ever...) was pulled after 4.1 innings of work in which he surrendered 5 runs on 7 hits and a walk while striking out just a pair of batters. While such an outing against one of baseball's weakest lineups is disappointing, it was, after all, his return from being sidelined with nerve irritation in his right (throwing) hand. Strasburg's velocity was certainly down in this start, as his heater sat at 91-92mph and topped out at 93 (it was down to 94 on average last season, which was down from 95 in 2018 and 96 in previous seasons). Strasburg is coming off an excellent 2019 campaign in which he logged a 3.32 ERA (3.17 xFIP), 1.04 WHIP, 10.8 K/9, and 2.4 BB/9 in 209 IP (33 starts). Note that he added a sinker to his repertoire last season, a nod to his declining velocity with age and the need to branch out from being a pure power pitcher. Also noteworthy was that 2019 was only the second time in his career that he topped 190 IP in a season, so there is a long history of injuries here. Strasburg lines up for a rematch on the road with Baltimore next week.

Jacob deGrom (SP-NYM) found out the hard way that the Miami lineup is apparently not bad. He lasted just 5 innings against the scrappy Marlins in Sunday's start, giving up 2 runs on 7 hits and a pair of walks while recording 6 whiffs. The two runs came on a Jesus Aguilar homer (I told you he could very well rebound in Miami!), but the 9 baserunners allowed were uncharacteristic for the 32 year-old flamethrower. Through 4 starts in 2020, deGrom has a 2.45 ERA, 11.5 K/9, and 2.1 BB/9, all of which are in line with his work over his past couple of seasons. His heater sat at 97-99mph on Sunday, not far off his average of 99 (yes, average) for the season. Everyone has "rough" outings, and this is the kind that Jacob deGrom has as his ERA moves toward his xFIP (2.84). Don't worry and run him out there against the Phillies on the road next week.

Jesus Aguilar (1B-MIA) went 2-4 with 2-run jack against Jacob deGrom and the Mets on Sunday. The 30 year-old is off to a hot start with his new club, as he is batting .306 with 4 homers, 8 RBI, and 7 runs scored in 41 PA. Aguilar had a season to forget in 2019, as he hit just .236 with 12 homers and 50 RBI in 369 PA split between Milwaukee and Tampa Bay after breaking out in 2018 with a .274 average, 35 dingers, and 108 RBI in 566 PA. He appears rejuvenated in Miami, as he's struck out in just 12% of PA while making hard contact on 52% of batted balls. Moreover, he's laced 28% liners and lofted 41% flyballs - both career highs, meaning that his groundball rate sits at a (you guessed it) career low 31%. The usual "small sample size" caveat applies as always when the season is young, but we've seen Aguilar mash before and he is producing again. And yet he is available in 88% of ESPN leagues.

Amed Rosario (SS-NYM) is off to a sluggish start in 2020, as he went 0-4 with 3 strikeouts against the Marlins on Sunday. He's now batting just .226 with 1 homer, 4 RBI, 8 runs scored, and no stolen bases through 53 PA. His 19% strikeout rate is identical to 2019's clip while he's failed to draw a single walk - he did walk at only a 5% clip last season. Fantasy owners who were banking on him being a solid contributor are no doubt disappointed, as he did seemingly take a big step forward last season when he batted .287 with 15 homers, 72 RBI, 75 runs scored, and 19 stolen bases in 655 PA. However, his hard-hit rate has plummeted to just 21% so far in 2020 and his line-drive rate currently sits at a career-low 19% while his flyball rate is at a career-high 33% - not good for a guy making a bunch of soft and medium contact. Sunday's line suggests that he's not on the verge of breaking out and his fantasy owners should look elsewhere soon for SS help.

Corey Seager (SS-LAD) missed Sunday's game against the Giants, making it two straight contests in a row that the 26 year-old has rode the pine due to lower back discomfort. Before Seager sustained the injury while trying to make a catch on Friday, he appeared to be back to his 2016-2017 form after 2018 was lost to Tommy John surgery and he struggled in his return in 2019, with a back issue slowing him down. Through his first 54 PA of the 2020 campaign, however, Seager was batting .340 with 3 homers, 7 RBI, and 10 runs scored. While his walk rate is about 3% below his career norm at 6%, he's more than halved his strikeout rate, to just 9%. Although 54 PA is a small sample size, it's worth noting that he has logged a career-best 62% hard-hit rate (42% career), career-high 29% liner rate, and career-low 38% groundball rate. Hopefully the missed time doesn't cause him to miss a beat, as he's been a boon to his fantasy owners. And consider this - even though 2018 and 2019 were down years for Seager, he still posted a 106 wRC+ through 115 PA before going on the shelf in 2018 while in 2019 he finished with a 113 wRC+. He's still one of the game's most promising young talents... we just have to hope that he can stay on the field.