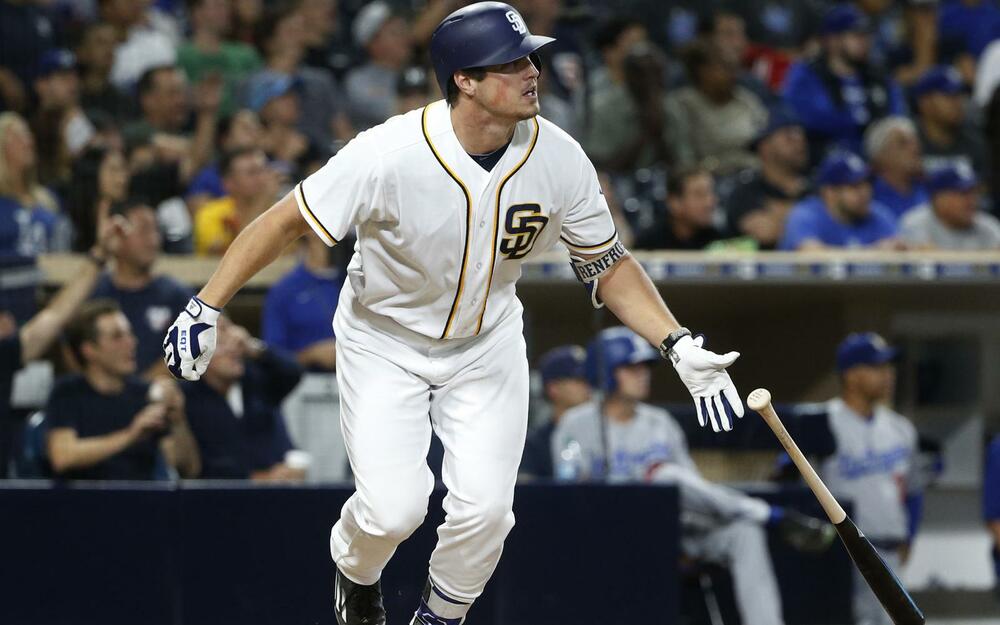 Hunter Renfroe went 0-for-2 with a pair of walks and a strikeout against the Red Sox on Sunday. Renfroe has struggled all season with a .160/.234/.420 slash line coming into Sunday's game, and he'll have to cut his ground-ball rate to get his OPS back near .800. Renfroe's ground-ball rate is up more than eight points from last season to 44.6% this year, and effectively all of those gains have come at the expense of his line-drive rate, which has tumbled from 15.8% last season to 8.1% this year. Like most players, Renfroe tends to benefit from putting balls in the air; last season, he posted a .452 OPS on ground-balls compared to a 1.482 OPS on fly-balls and line-drives, and that split has been similarly pronounced this year. Unfortunately, Renfroe's ground-ball rate hasn't been trending in the right direction recently and sits at 48.4% over his last 15 games, so it's unlikely that his performance improves significantly over the last few weeks of the season. That being said, Renfroe has improved his contact skills with a career-best 11% swinging-strike rate this year, so if he can get his contact quality back up while maintaining his contact improvements next season then he could be in line for a career-best year.

McKenzie had his worst start as an MLB pitcher on Sunday, allowing five runs over 4.1 innings. It wasn't all bad for McKenzie as he struck out seven with a 13.4% swinging-strike rate, but he allowed a trio of home runs that resulted in his poor start. McKenzie has now allowed at least one home run in four of his five career MLB starts, and they've come primarily against his changeup. That home run issue has resulted in a .445 xwOBA for McKenzie's changeup, and McKenzie may be better off ditching the pitch, which already has an arsenal-low 10.7% usage rate and owns an unimpressive 9.3% swinging-strike rate to go along with its poor xwOBA. It's only been five starts, but McKenzie's changeup was also his worst pitch in the minor leagues, and ditching the pitch should improve his overall performance. Still, McKenzie is one of the more exciting young pitchers in baseball and should remain rostered in nearly all leagues.

Franco went 3-for-5 with a trio of singles and a strikeout against the Pirates on Sunday. Franco has been solid this season with a .792 OPS through his first 47 games, and he's made launch angle improvements that make his (relative) success mostly believable. Franco's 14.8% average launch angle from last season looks good on its face, but his hits were widely distributed across launch angles, and his low 24% sweet-spot rate and 6.9% barrel rate make that clear. Franco has tightened up his launch angle this season though, and both his sweet-spot (36%) and barrel (7.3%) are up as a result. More concretely, Franco has increased his line-drive rate from 21% last season to 33% this year, and his IF:FB ratio is down eight points to 17%. Those contact quality improvements have fueled Franco's career-best .380 xwOBAcon and .338 xwOBA this season, indicating that his performance has been deserved. Fantasy managers should be encouraged by the 28-year-old's progress this season and expect him to continue posting an OPS near .800 through the rest of the season.

Turnbull had his second rough outing in his last three starts on Sunday, allowing five runs over five innings. Poor contact quality did Turnbull in on Sunday, as the 27-year-old allowed nine hard-hit balls for a 53% hard-hit rate. Encouragingly, though, Turnbull walked only one batter on Sunday, giving him his second start of the season with fewer than two walked batters. Still, I'm not sold on Turnbull as a fantasy asset. Only Turnbull's slider has an xwOBA below .350 this season at .230, and it's also his only pitch with a significantly above-average swinging-strike rate at 21%. It's no surprise, then, that Turnbull appears to have benefited from a significant amount of luck this season. To that end, Turnbull's .362 xwOBA is 82 points higher than his wOBA -- only two qualified pitchers (Yoan López and Alex Colomé) posted a wOBA-xwOBA below -0.60 last season -- and his 2% HR:FB ratio is unsustainably low. Fantasy managers should expect Turnbull to post an ERA closer to 4.50 over the rest of the season as a result, and sell high if possible.

McCann went 1-for-4 and struck out once against the Tigers on Sunday. McCann has followed up last season's breakout campaign with a .934 OPS through 21 games this season, and he's managed to see fairly consistent playing time even with Yasmani Grandal joining the team. McCann's improved performance this season can be almost entirely attributed to an improved plate approach; McCann has cut his o-swing rate down 30% with a much small decrease in his z-swing rate (66.4%), helping lead to a career-low 10.3% swinging-strike rate and 22% strikeout rate. McCann's improved plate approach has spilled into his contact quality as well. The percentage of McCann's contact coming on balls in the strike zone is up seven points from last season to 88%, and that increase alone explains about half of his 34-point xwOBAcon increase (.469). Combined with the fact that McCann has maintained his power bump from last season, his improved plate approach makes his strong 2020 performance largely believable, and fantasy managers should expect the catcher to post an OPS comfortably above .800 going forward.

Tweets by Fantistics
NL Player Analysis - September 14, 2020
One streak without an earned run ends, and another takes its place - September 15, 2020