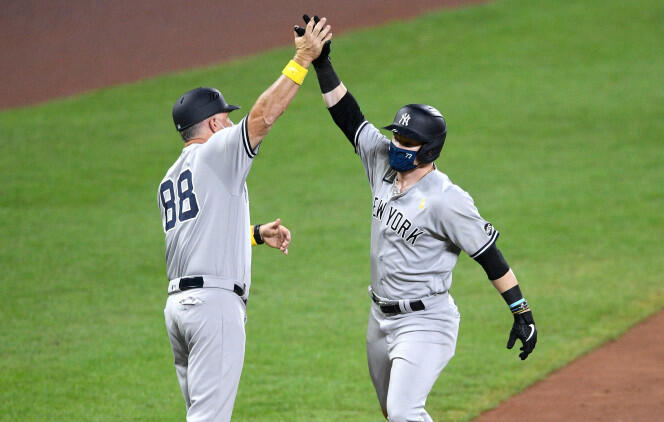 Clint Frazier, New York Yankees - Clint Frazier went 2-for-4 at the plate Saturday with his fifth homer over the season. Frazier continued his tear at the plate with a 164 wRC+ for the season and he's showing great plate discipline metrics with a 14% walk rate against a 28% strikeout rate. Even once the outfield returns to full strength Frazier deserves a spot for playing time somewhere in the Yankees lineup, and at worst he's shown the potential that he can be a long-term asset in dynasty leagues worth hanging onto.

Kyle Tucker, Houston Astros - Kyle Tucker homered for the seventh time while going 3-for-6 for the Astros. Tucker has been outstanding this year with a .277/.329/.577 and a 139 wRC+, as he's finally gotten an extended run of playing time due to some injuries across the board for the Astros. Tucker's performance should give him the reigns to a corner outfield spot from here on out. Aside from his xwOBA (63rd), everything in his batted ball profile is in the 70th percentile or higher as he's just great across the board for the team. He's also chipped in four stolen bases just in case the batting profile wasn't strong enough on its own.

Gerrit Cole, New York Yankees - Gerrit Cole gave up one earned run (five total runs) over six innings against the Orioles on Saturday. Cole has been very un-Cole like this year because even while his strikeouts are still extremely high (31%) but he's been hit extremely hard with a 48% hard-hit rate and a 10%-barrel rate. Cole's previous career-high is barrel rate was just 7.6% and his hard-hit rate peaked at 39.8% two seasons ago. Cole's fastball isn't anywhere near as effective as normal with a .252 batting average and a .524 slugging against him, and those are right in line with the expected stats against him. You can't get off of the Cole train, but things are clearly of this season.

DJ Stewart, Baltimore Orioles - DJ Stewart homered twice on Sunday, his only hits of the season. Stewart has spent most of the season with the team's alternate training site but was recalled on September 1st and has made his way into the lineup each of the last two days. Stewart has hit eighth in two of the game but found his way up to second in one of the games of the doubleheader. While he's hitting just .105 but he's walked nine times in 31 plate appearances giving him a .414 OBP. Stewart has run high BB% rates in the minors so there could be something here if he can hit towards the top of the lineup, but that's the only place where I'm taking a look right now.

Kenta Maeda, Minnesota Twins - Kenta Maeda was fantastic over six innings, striking out eight batters though he did allow three runs. Maeda allowed just three hard-hit balls on the evening, though one came from the bat of Victor Reyes that left the yard. Maeda has once again been a steady option for fantasy with a 2.77 ERA over 48.2 innings and his metrics are outstanding. His hard-hit rate is in the 96th percentile while he is running a 79th percentile K%.