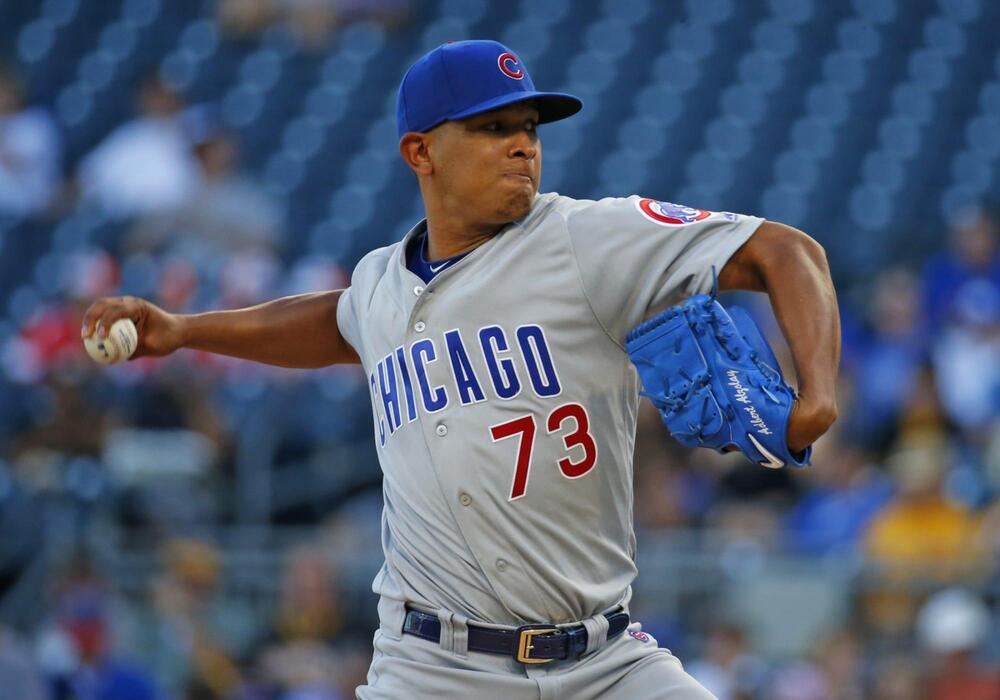 Adbert Alzolay (SP-CHC) earned the win against the Reds on Friday afternoon as he tossed 5.2 scoreless innings in which he gave up 5 hits and walked 3 while fanning 6. The 26 year-old righty tossed 65 of his 103 pitches for strikes in the contest. Alzolay is putting together a strong 2021 campaign, as he now has a 3.81 ERA, 9.2 K/9, and 1.8 BB/9 through 9 starts (49.2 innings). His 3.41 xFIP suggests that his ERA could come down a bit more, as his 20% HR/FB is high. In addition to the solid strikeout rate and modest 73% contact rate, Alzolay has induced grounders at a healthy 46% clip while opposing hitters have logged only an 18% liner rate against him. With a nice 13% swinging-strike rate, a low walk rate, and an ability to induce grounders, Alzolay appears poised to be a fantasy contributor going forward. He lines up for a test at home against the Padres next week.

Vladimir Gutierrez (SP-CIN) made his debut against the Cubs on Friday afternoon as he filled in for the injured Wade Miley. The 25 year-old acquitted himself well, as he gave up just 1 run on 2 hits and a pair of walks while striking out 3 over 5 innings of work. Gutierrez was efficient on the mound, as he threw 47 of his 67 pitches for strikes. He did give up a longball in the outing. Gutierrez had put together a strong spring training before performing well through his first 3 Triple-A starts of the 2021 campaign, logging a 2.65 ERA, 11.1 K/9, and 3.7 BB/9 across 17 innings of work. A 3.87 xFIP, however, indicated that he outperformed his peripherals, namely a low .171 BABIP and a 94% strand rate. A look at his minor-league track record doesn't scream high potential, as the highest K/9 he logged before this year was 8.9 in 147 Double-A innings back in 2018, his BB/9 steadily climbed as he progressed through the minors, and he has shown a tendency to give up longballs (1.71 HR/9 across 137 Triple-A plate appearances in 2019). Gutierrez does possess a repertoire that includes a fastball that sits in the low 90s and can be pushed into the 94-96 range, as well as a plus slider and curve as well as a middling changeup. He's worth keeping an eye on given his recent success but is not quite one to rush to pick up off the waiver wire.

Eugenio Suarez (SS-CIN) went 0-1 with a strikeout in a pinch-hit appearance against the Cubs on Friday. This was the first time he did not receive a start in nearly 4 weeks. The 29 year-old definitely needed the day off, as he is hitting just .159 with 11 homers, 25 RBI, and 27 runs scored through 203 plate appearances on the season. His strikeout rate sits at a lofty 33% (26% career) while his hard hit rate is down to just 32% (36% since 2015, but north of 40% each year 2018-2020) per Statcast. Somewhat encouragingly, his average is up to .191 in May after he batted just .130 through April, and he's trimmed his strikeout rate to 27% in May. Ultimately, Suarez is hitting too few liners (14% in 2021, 22% career) and lofting too many flyballs (47% in 2021, 40%) career, with the latter especially problematic given his trouble making hard contact. While the power output has held strong, it's concerning that Suarez is hitting for a very low average for the second straight year after he batted just .202 across 231 plate appearances in 2020. The homers offer just enough for his fantasy owners to keep him around as they wait for his average to climb. And it should to some degree, right?

Dinelson Lamet (SP-SD) made yet another abbreviated start, as he completed just 3 innings against the Astros in which he gave up 2 runs on 5 hits and a pair of walks while recording 3 punchouts. He threw 37 of his 64 pitches for strikes and gave up a homer in the outing. The Padres have handled Lamet carefully this season after an elbow issue ended his 2020 campaign early. He now owns a 2.57 ERA, 9.6 K/9, and 3.9 BB/9 through 14 innings of work. His 4.11 xFIP, elevated walk rate, and suppressed strikeout rate highlight that he's not quite right. His average fastball velocity is 95mph, which comes in significantly below his 97mph average from last season and a bit below his 96mph from 2019. He lines up for a start at home against the Mets next week and there is little reason for him to go deep in that one, either.

Seth Beer (1B-ARI) is quietly putting together a solid start to the 2021 campaign, as owned a .304 average to go with 3 homers, 7 RBI, and 16 runs scored through his first 81 Triple-A plate appearances entering Friday's action. He's logged a 19% strikeout rate and 7% walk rate while ripping liners at a healthy 22% clip and lofting flyballs at a useful but not ridiculous 37% rate. The 2018 first-round pick played in High-A and Double-A in 2019 and acquitted himself well overall despite a rough stretch after moving from the Houston organization to Arizona. In High-A, he hit .328 with 9 dingers and 34 RBI across 152 plate appearances (20% strikeout rate, 9% walk rate) and then, with Double-A Corpus Christi, he batted .299 with 16 homers and 52 RBI across 280 plate appearances (21% strikeout rate, 9 walk rate). Beer did scuffle a bit after changing organizations, as he finished the campaign by hitting .205 with 1 homer and 17 RBI across 101 Double-A plate appearances (25% strikeout rate, 8% walk rate). Given his pedigree, largely encouraging performance in the minors, and that there is not much blocking him from the majors, Beer is worth keeping on your fantasy watch list.