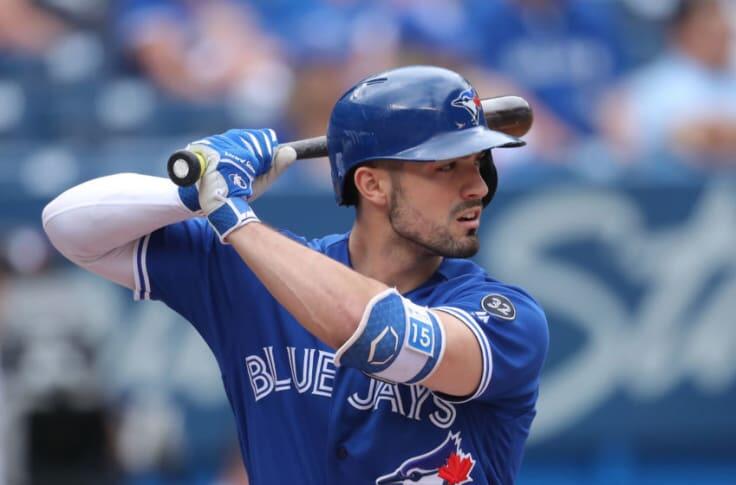 Grichuk went 3-5 with 2 doubles, 3 runs scored and an RBI. As much attention as the Young Blue Jay Bats have gotten perhaps no-one better then Grichuk has helped the team stay a float in the absence of George Springer. His multi-it effort Friday gives him a 7 games hit streak, and overall has hit safely in 13 of hit past 14 games as his slash line has climbed to .288/.318/.492. While he has put up big time counting stats (12 doubles, 9 HR, 38 RBIs) he has gotten a bit of luck with a career high .303 babip. That maybe do to a slightly different hitting approach that has seen him shoot a career high number of balls up the ,middle (41%) and pull a career low number (33%). He has also always a big swing-and-miss approach to his game but has a career low 21% K rate and in fact has seen his K rate drop every year since a career worst 30.1% in 2017. Grichuk should be started daily, until George Springer returns. Even then, Toronto should still find a way to keep hi in the lineup most days.

Bichette went 0-4 with a run scored and a pair of Ks Friday night. Bichette hit over .300 in both 2019 and 2020 but his .272 average / .324 babip has lagged slightly from the past 2 years. Bichette has seen a slight decline in fastballs this year, and an increase in breaking pitches - which he has handled well - hitting .293 with 5 HR vs breaking pitches. When he makes contact overall, he is hitting the ball hard - with a 49% hard hit rate and 12.9%-barrel rate%. The batting average dip aside, Bichette has been a great Fantasy shortstop slugging 11 home runs, driving in 31, scoring a Major League Leading 41 runs and going a perfect 7 for 7 in stolen base attempts.

Merrifield has a double among a pair of hits, with 3 RBIs Friday Night. Merrifield entered play Friday leading the league in steals despite a .249 batting average and .319 obp that are far lower then his career totals (.292/.341, respectively). Merrifield has seen an 8% uptick in groundballs and is also pulling the ball significantly more then a year ago (29% to 37%) which may be leading to his depressed .259 babip - 49 points lower than his next lowest mark. His walk rate is up to a career high 8.7%. Look for his batting average to normalize and the stolen to continue to pile up as he should continue to be near the top of the league in that category.

Soler has a multi hit game Friday which was great to see considering he entered Friday in an 0-21 slump with 12 strikeouts as his 48-home run season of 2019 almost seems like a mirage at this point. While his walk rate (8%) and K rate (32%) are about in line with his career marks the recent swing and miss issues are overwhelming. His .238 babip is well below his .302 career mark but even so his power numbers are still near the top of the league, when he does make contact as his exit velo (93 mph) and hard hit rate (51%) both still rank in the top 10 in the league. He has seen roughly the same pitch distribution as in years past in terms of % of fbs/chg/offspeed but is hitting inexplicitly .198 vs fastballs in 2021. While he could go on a surge at any time, he did hit just .228 with 8 home runs over 43 games last year as 2019 is possibly looking like a bigtime outlier.