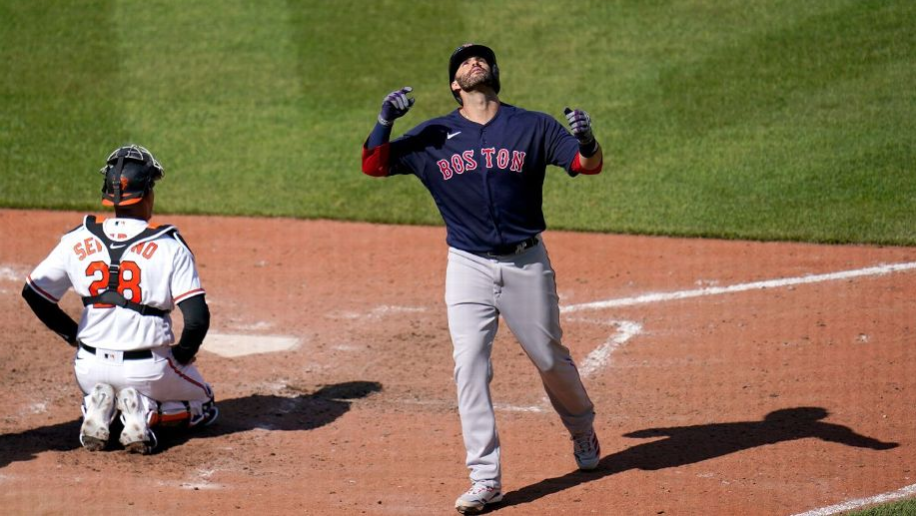 Martinez extended his hitting streak to five games with a single in four at bats. Despite hitting safely in nine of his last 10 games, Martinez has cooled off over the last month. After a blistering start to the season he is still hitting for a nice average, but his power has dissipated as he only has one extra-base hit in his last seven games. That was a home run, which is his only home run since May 20. Plate discipline has never been Martinez's strong suit, but there is further regression this season. He has the second-highest chase right of his career and his overall contact rate is down to 73%. Meanwhile, he still makes solid contact but it's not at the level it was during his MVP-caliber seasons from 2015 to 2019. His barrel rate is a career-low 10.8%. Pitchers are attacking him a bit more inside the strike zone, which is leading to slightly less walks but also the opportunity for more base hits. Expect the batting average to hover around .300 and although he may not return 40-home run power ever again, he is still capable of hitting dingers. As the Red Sox lineup has returned to prominence, Martinez remains among the leaders in RBIs with 41.

The struggles continue for Yasmani Grandal who went hitless in four plate appearances on Monday. He walked. He's doing that. In fact, he has 32 more walks than hits. This season is just so weird for Grandal: walking more than striking out, half his hits are home runs and his BABIP is nearly 140 points lower than his career average. We'll start there. He will see positive regression in his batting average. A .139 BABIP is inexplicable for a player with a top-10 average exit velocity (94.6 mph). Sure, he's hitting more ground balls than would normally benefit a player who's slow as molasses, and he has a real "shift problem." He is crushing the ball but kind of in the wrong place. Grandal is hitting under .100 against the shift. He is hitting the ball hard but in predictable locations. Unless he hits it out of the park, his chance of getting on base is slim. The fun (or maybe frustrating) part about fantasy baseball is that Grandal is hugely valuable in OBP leagues (.395 OBP with 10 home runs) and nearly unstartable in standard leagues. I still think there's a lot to be optimistic about and I'd go ahead and hang on to the enigmatic slugger.

Galvis was quiet in Baltimore's 4-3 loss at Cleveland on Monday. He did pick up his 24th RBI on a groundout in the 4th. At 31 years old, Galvis is on pace for a career season. After signing in late January, the Orioles shortstop already has nine home runs with a career-high .194 ISO and 106 wRC+. He increased his power while also improving his contact rate, up seven percentage points from last season to 81.7%. Galvis has always been capable of hitting high velocity but this season he is holding his own against offspeed pitches. He is particularly strong against left-handed pitching, with a .258 ISO and 147 wRC+. Galvis could be on the move at the trade deadline as he presents value to a contender as a versatile middle infielder with 20+-home run power and a knack for hitting lefties. You could do worse in your MI slot than the undervalued switch-hitter.

Boyd battled through 2.1 scoreless innings before leaving Monday's game with a triceps injury. Hopefully it's a minor injury and hopefully Boyd can come back with a renewed focus on strikeouts. In a season with an unconscionable number of strikeouts, where are all the strikeouts for Matt Boyd? In his last full season in 2019, Boyd averaged 11.56 K/9. This year that number is down to 7.11. The 3.44 ERA is nice, although a bit lucky, but many fantasy owners invested a late-round pick in Boyd for his K's. Hitters are making contact at a rate of nearly 80% this season (71.7% in 2019) and his swinging strike rate is down nearly four percentage points. Part of the reason for the drastic change is what happened BETWEEN 2019 and 2021. Oh yeah, there was that 60-game 2020 season where Boyd struggled mightily to a 6.71 ERA. His fastball wasn't the same, losing nearly 80 RPM off his spin rate from 2019 to 2020. So that has led to a diminished usage of his fastball this season and an increased usage of his changeup. None of his pitches have been particularly effective as a putaway pitch, but his fastball is down dramatically over the last two seasons in whiffs and third strikes. There is danger here. His changeup has been effective to the tune of a .256 opponents' wOBA, but that is based on some luck. It's nice that things have mostly worked out, but Baseball 101: if a pitcher's fastball loses effectiveness, bad things typically happen. The bigger concern right now, however, is the status of that left triceps injury. Expect a trip to the injured list.

Bradley was 1-for-3 on Monday, which naturally LOWERED his batting average to .429. He added an RBI, his 8th in seven games, while striking out for only the third time in 23 plate appearances. Strikeouts were a problem for the slugger throughout the minor leagues, but he is seeing the ball fairly well right now, allowing him to showcase his big power. I'll venture to guess he won't finish the season with a .429 average, and I will assume his 15.2% swinging strike rate will eventually lead to more K's, but Bradley is a prototype for baseball in 2021. He has very good power, the ability to carry a high barrel rate and the potential for massive production this year and beyond. Cleveland has no reason NOT to continue starting him and Bradley will have to adjust as pitchers get better scouting on him. If he can sustain that challenge, the former prospect can emerge as a productive fantasy weapon.