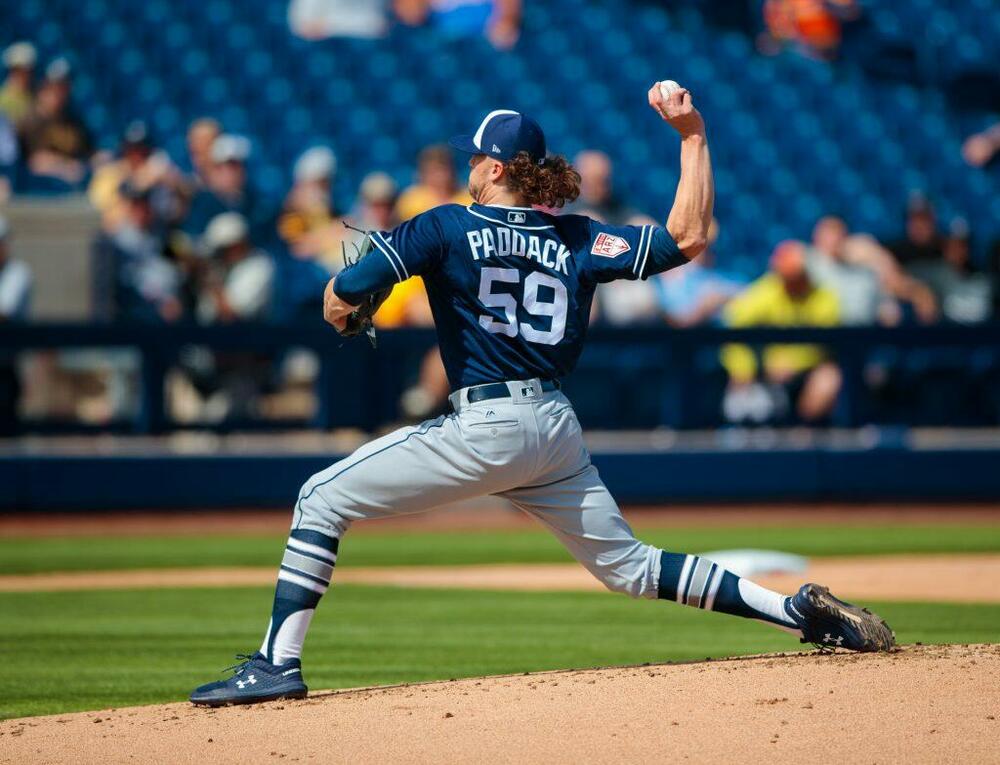 Chris Paddack (SP - SD) - Paddack was shelled for the 2nd time in 3 starts on Wednesday, this time allowing 9 runs (8 earned) on 9 hits to the Nationals in just 2 innings. There are some bright spots for Paddack this year, as the control has remained solid while the swinging strike rate has ticked up from above to above average, and there's been some bad luck in terms of strand rate to be sure. Last year's hard hit rate and exit velo spikes haven't gone away though, and the delta between his fastball and changeup has dropped this season, which likely contributes to the sudden stunning lack of effectiveness in what was previously his best pitch. He had a relatively low spin rate to begin with, surprisingly, and he's lost a bit of vertical movement on both his fastball and changeup since coming into the league. His curveball has been very effective for a pitch that he only uses about 10% of the time.....it seems like he should deploy that more often. What makes matters worse is that all of his worst outings this year have come in matchups that were at least somewhat favorable for him, making him very hard to plan roster decisions around. I do feel like there's a decent mid-rotation starter in here somewhere, but right now he's merely an SP5 for me, and one I don't have a ton of faith in at that.

Patrick Corbin (SP - WAS) - Corbin was OK on Wednesday, holding the Padres to 7 hits and 2 runs over 6 innings, walking 2 and fanning 3. The caution here is more to illustrate the fact that I firmly believe Corbin is a streamer only at this point in his career: the 3-start stretch he had in late June where he was extremely effective came against the 3 worst offenses in baseball to this point, a scheduling quirk that isn't likely to repeat itself. He's become simply average at missing bats, and that brings his value down a great deal. Sure, he's had some poor fortune in terms of strand rate and HR/FB rate, but the fact remains that without that elite bat-missing ability he is much more of a question mark in terms of total value. Coming out of the break he's likely to face the Padres again, then the Marlins, Phillies, and Cubs. It isn't the toughest schedule, so I do believe he is worth rostering for the rest of the month at least, but he is definitely outside of my top 60 at this point and I'll be picking and choosing matchups with him.

Luis Urias (2B - MIL) - Urias went 4-7 with 2 HR and a BB in Wednesday's doubleheader against the Mets, and he's now hitting 242/328/432 for the season. With him batting leadoff every day now, he absolutely is worth owning in just about all formats. The power is still below-average on the whole, but a massive increase in launch angle this year will likely thrust him into the 20+ HR category, and he has a little speed and above average contact ability as well. Still just 24, there could be a touch of upside from here if he adds a bit of muscle over the next few seasons as well.

Orlando Arcia (SS/OF - ATL) - I know that Arcia really hasn't ever been a productive major leaguer, but I'm intrigued by some things that I see from him over the past few seasons. The Braves have immediately made him their primary LF since promoting him from AAA on Sunday, and he's quickly gone 5-15 with a HR and 4 RBI. More intriguing, though, are the gains that we've seen over the past few seasons. The contact rate has improved steadily over the past 3 years. The exit velo has steadily moved from below average to above average over the past 4 years. The launch angle is increasing, as evidenced by the 13 HRs in 201 AB at AAA so far this year. All of these things point toward a much improved performance level, something that we started to see in September of 2020 with a .191 ISO. He still has a bit of speed as well.....I think he is worth a speculative pickup in all but the most shallow of formats right now. Improved contact ability, improved power, decent speed, and a solid offense from a player that most have given up on, yet he is still 26. Seems like an opportunity to me.

David Peralta (OF - ARI) - Peralta has been pretty bad since late May and hasn't homered since May 15th, and I was all set to write something up about how players that break into the majors late typically peak early, have short careers, etc. Looking into Peralta's 2021 though, it just doesn't seem all that different from what he typically does, at least as far as the underlying data goes. The exit velo is down a bit the last few years but not lower than it was in the first few years of his career, and the batted ball dispersion and contact rates are pretty standard for him. He's just had abnormally low BABIP and HR/FB rates....at an "easily the worst of his career" level. The one cautionary sign that I see is that his defense has been the worst of his career also, and often that is a sign of physical decline. Other than that though, I see no reason that he can't bounce back and put up a more typical performance in the second half....not typical like 2018 of course, but 2017 or 2019? Sure.