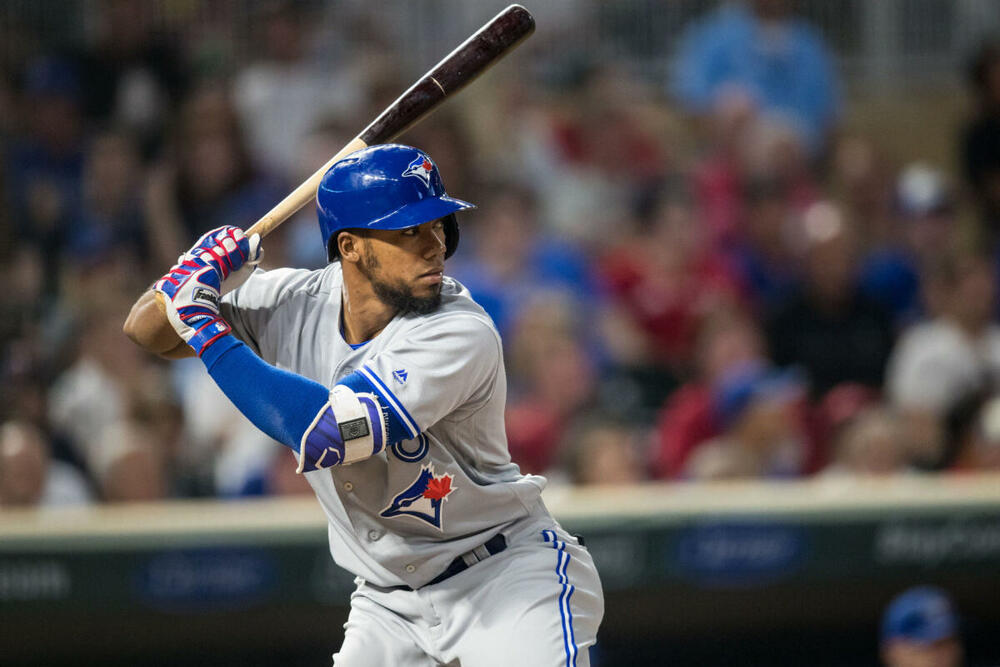 Hernandez continued his red-hot streak, going a perfect 5-for-5 with a double and two runs scored on Monday. It's his fourth straight multi-hit game. He's scored at least two runs in all of those performances, and his slash line is now a spectacular .308/.359/.532. Hernandez reminds me of Tim Anderson with a little more pop. He overcomes a low contact rate (just over 70%) with an elevated BABIP (.373), but like Anderson, Hernandez is establishing a high BABIP as a skill. His quality of contact is elite and so when he makes contact, a large percentage of his batted balls are likely to go for base hits. He's also incredibly athletic and speedy, which justifies his 11 stolen bases. Overlooked among the gluttony of talent in Toronto, Hernandez is worthy of a high draft pick in 2022.

Alvarez hit his first home run in 12 games in the 2nd inning of Monday's blowout at Texas. Then he connected for his second homer of the game in the 7th inning. He finished 2-for-5 with four runs and three RBIs. Prior to Monday's game, Astros manager Dusty Baker suggested he could use Alvarez at first base to develop some versatility in the field. On Monday he was his traditional DH and he mashed like it. Alvarez has been very patient on pitches inside the zone this year. He is actually walking a lot less than previous seasons, but he waits for the right pitch in the zone. So he makes contact on 91% of pitches inside the zone. It's impressive. It almost seems like his eye is worse this year because of the reduced walk rate, but he's actually seeing the ball better, just walking less, and his quality of contact continues to rank among the best in all of baseball. Healthy, perhaps acquiring additional position eligibility and mashing as he's done since he joined professional baseball, Alvarez should be drafted in the first two rounds next season.

Altuve was a significant part of Houston's offensive explosion on Monday, finishing with two hits, including a double and three runs scored. He also had a walk and two RBI's. On pace to finish with the second-highest ISO of his career, Altuve has reemerged as a power threat at the keystone. His batting average no longer sits well above .300, but he still gets on base at a .352 clip. Altuve's career-high 16-degree launch angle explains his sub 1.0 GB/FB rate. He is hitting the ball in the air way more, on the ground way less and therefore seeing a lower batting average but more home runs. Fantasy owners should take those notes cautiously. He isn't hitting the ball particularly hard, and although his HR/FB rate isn't astronomically high, it's much higher than his career average. If Altuve is willing to surrender his typically high batting average for a little more power, the fantasy benefits could be short-lived.

The rookie Luis Gil allowed three home runs in six innings of a no-decision against Minnesota. After three scoreless outings to start his career, Gil has now allowed eight runs in 9.1 innings over his last two starts. Last week it was seven walks that did him in. On Monday it was three home runs, the first homers allowed by Gil, that led to five runs allowed in six innings. He did tie his career high with eight strikeouts on a 31% CSW rate, but he allowed a 93.8-mph average exit velocity, including four batted balls over 100 miles per hour. His fastball and slider are really impressive pitches, but he will need to add to his repertoire in order to remain a starter in the major leagues. He's a risky play in the fantasy playoffs, and fantasy owners need to monitor his status over the offseason. If he is working on another pitch or two, that is encouraging heading into the 2022 season.

Polanco hit his 30th home run of the season, a 421-foot line drive well over the fence in right field. Polanco finally developed more power this season, which combined with his flyball tendency, has led to more home runs. A 2-3 mile-per-hour progression in Polanco's average exit velocity has turned into a six percent increase in HR/FB rate. The harder swings predictably led to a regression in contact, but it is minimal and he still makes 82.4% contact so there isn't much concern there. Furthermore, Polanco is contributing in the stolen base category with 10 this season. His value dropped far too much following a disappointing 2020 season. But that was 2020, and it should generally be ignored because of its abnormalities. Polanco's breakout 2021 season likely isn't his peak. There is still room for more power, and the addition of 2nd base eligibility makes Polanco a very desirable middle infield option in 2022.