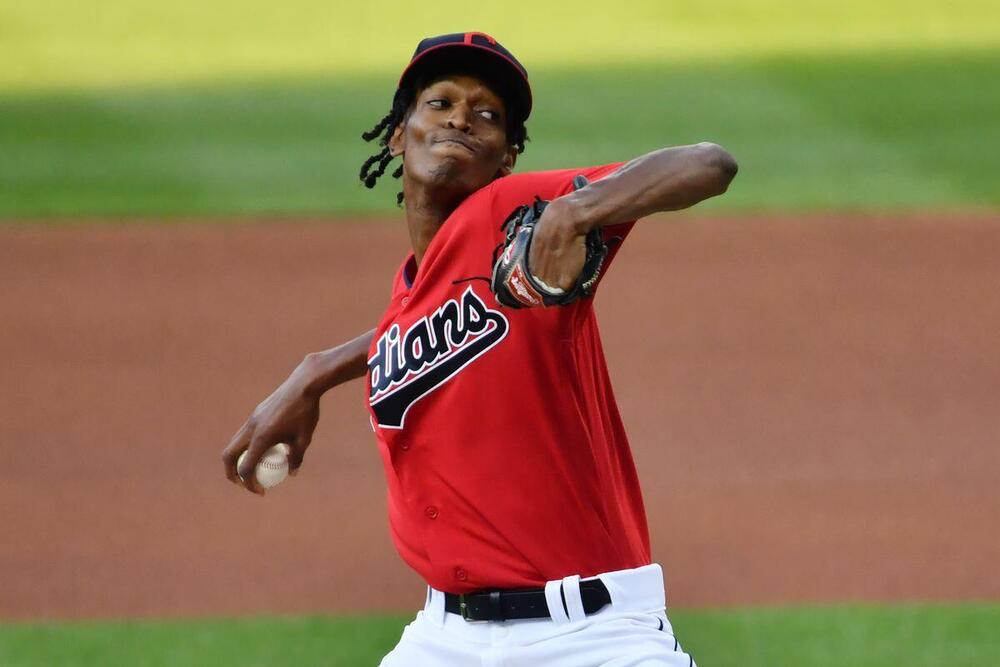 McKenzie allowed 1 ER over 6 innings, striking out 7 Tuesday against the Twins Tuesday. It has truly been a tale of 2 seasons for the young right-hander as his ERA sat at 6.11 after getting shelled for 6 ER on July 31st. While he was sidelined for a few weeks since then, he has looked like a completely different pitcher - the Ace Cleveland envisioned as he has allowed 8 total ER over his past 6 starts entering play Tuesday while picking up 41 strikeouts over 40 innings covering those starts. Interestingly while those are decent strikeout numbers, he has struck out a lot less batters in the second half of the season (8.67 K/9) compared to the first half (12.41 K/9) but that may be by design as his walk issues have completely gone away. McKenzie had a sky-high 7.30 BB/9 in the first half of the season but has shrunk that to a very strong 1.50 BB/9 in the second half. Despite this change and throwing more strikes it hasn't really hurt him as batters are still struggling to make contact to the tune of a.174 batting average in the second half. That was on display again Tuesday as he pumped the strike zone for 19 first pitch strikes as batters continually fell behind vs him. He has the pure stuff to be successful and may just be scratching the surface - 2022 could be a big year for him.

Ryan allowed 1 ER over 5 innings Tuesday, striking out 5. The Key Piece in the Nelson Cruz trade, Ryan should get 1 or 2 more looks in the Twins rotation as he looks to secure a starting nod in 2021. Ryan has put up big time K numbers across just about every stop in the minors for Tampa before the deal while keeping his walks to a minimum, but Ryan hasn't necessarily looked elite from a strikeout perspective in his first 2 big league starts but the 5 over 5 innings was nice to see Tuesday as he had complete control of the zone throwing 50 of 67 pitches for strikes. Ryan has limited hits over his first few MLB starts however as his 4-pitch mix of 4-seamer (91.4 mph), slider (81.4 mph), changeup (83.4 mph) and curve (72.7 mph) has given hitters a lot to think about with the 20-mph range in velocities. Ryan appears to be a safe bet at this point to open in the Twins rotation in 2022 and could be pitching near the top of the rotation.

Rasmussen tossed 5 shutout innings, striking out 3. Rasmussen has emerged as a valuable arm for the Rays, following his acquisition from the Brewers. After posting a 4.24 ERA and being used exclusively in relief, He has been used a variety of ways, as is the Tampa Pitching way - making 18 appearances which includes 8 starts and 2 games finished. He has pitched to a 3.00 ERA and while his K rate (8.2) isn't overwhelming he has been a ground ball machine with the Rays, generating them at a 52% rate. The 26-year-old is a bit of a late bloomer as he has already had 2 Tommy John Surgeries which has delayed his career significantly. That being said, after the surgeries he needed just 35 appearances in the minor leagues before getting the call from the Brewers and I can envision Tampa using him in 2022 as a similar hybrid role - he is definitely a name to pencil late into your draft board next year to take a flyer on.

Gordon went 2-5 across both games of the Twins DH Tuesday. The Rookie was a former consensus Top-100 overall MLB Prospect, and although he has had varying levels of success across multiple minor league seasons (.212 average in AAA in 2018, .298 in 2019) Gordon has picked up starts at 2B,3B,SS,LF and CF this season for the Twins giving them another versatile bat. I'd say he has provided about what was expected so far posting a below average batting average with minimal pop (2 HR) but has scored 15 runs in 57 games and stolen 8 bases - his real skill. His 26% K rate so far is a bit elevated from his minor league days but has made surprisingly decent hard contact (49%) but has put too many of those balls on the ground (53%). Softer contact may be the speedster's friend here as it could allow him to beat out more ground balls. Gordon has 1 minor league option left and barring a bad spring training in 2022 should at least get a job on the Twins bench next year - but possibly a starting gig considering Andrelton Simmons will be a FA.

Rosario went 1-7 across both games of Cleveland's DH Tuesday. Rosario could never get it consistently going with the Mets, but his 2021 campaign with Cleveland may be his best yet. While his .725 OPS does not quite match up with his career .755 mark in 2019, It has been a few small things that caught my attention and that make him a possible 2022 sleeper. First off, a slight increase in his walk rate to a career best 5% along with a 11% increase in his hard-hit rate this year have allowed him to have overall more competitive at bats. His .319 OBP is within striking distance his career high as well and he could eclipse that if his babip and walk rates hold. The biggest thing that jumps out to me is his baserunning. From 2018-2019 he swiped a solid 43 bases - but was also caught 21 times. This year he has not quite been as active but is a perfect 12 for 12 on the basepaths - which shows a lot in his maturity as a player. Rosario has also picked up starts at both SS and the OF - making him an attractive sleeper option for next year.